SHANGHAI, Dec 5 (SMM) - The aluminium ingot social inventories across China’s eight major markets stood at 507,000 mt as of December 5, up 7,000 mt from last Thursday. However, the figure was 10,000 mt lower than the end of November and 472,000 mt less than the same period last year. The inventory in Wuxi maintained a downward trend due to limited arrivals, and this trend will be extended. Inventories in other regions such as Nanhai and Gongyi rose slightly. Inventory in Gongyi rose for two weeks in a row after the resumption of shipments. The inventory growth in Hangzhou and Nanhai was caused by increased arrivals. The arrivals and cargo pick-up in Chongqing were still hindered due to severe pandemic, but cargo pick-up improved slightly, driving down the inventory. The weekly shipments out of warehouses in the major markets added 7,000 mt on a weekly basis last week, but remained low compared with the same period last year. 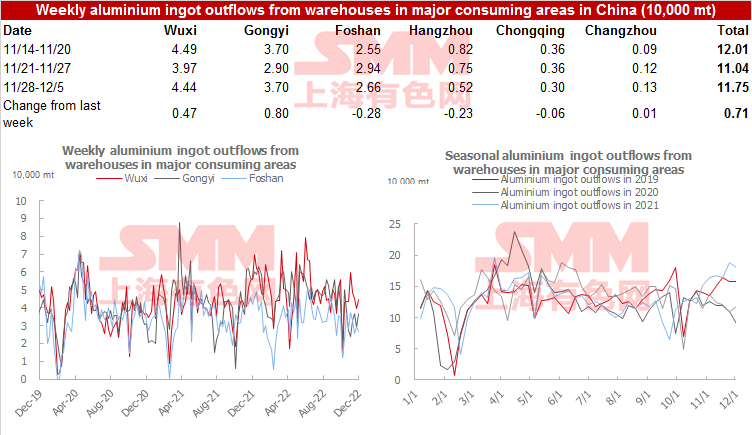