CST
Source:SMM
This is a roundup of China's metals weekly inventory as of November 25.

SHANGHAI, Nov 25 (SMM) - This is a roundup of China's metals weekly inventory as of November 25.

Aluminium ingot: The aluminium ingot social inventories across China’s eight major markets hit a new low of 518,000 mt as of November 24, a drop of 29,000 mt from a week ago. The figure was also 96,000 mt lower than a month ago and 500,000 mt less than the same period last year. The inventory in Wuxi fell 23,000 mt on a weekly basis to a new low of 119,000 mt as fewer cargoes arrived, and this trend will be maintained next week. Shipments to Gongyi have been restored, but the amount of cargoes in transit was at a medium level. Considering that the production of some downstream enterprises in Henan was disrupted, the inventory changes in Gongyi will deserve close attention next week. The inventory in Foshan was also in a downward trend amid relatively brisk trades. Given the output cuts by aluminium smelters and increased proportion of aluminium liquid production, there is little possibility of inventory accumulation in the foreseeable future. SMM data showed that the proportion of aluminium liquid in smelters’ total output increased to 69.8% in October.  It is expected that the social inventory will stay at a low level.

Aluminium billet: The domestic aluminium billet social inventory added 2,400 mt from a week ago to 63,000 mt as of November 24. Enormous arrivals from Xinjiang pushed the inventory in Foshan up by 1,100 mt to 40,100 mt. Shipments from Qinghai and Gansu were still hindered, leading to limited arrivals. The supply in east China remained tight. Output cuts in north-west China, coupled with the pandemic-induced production and railway transport disruptions in Shandong, resulted in fewer shipments to east and north China, offering some support to local conversion margins. Despite tight supply in some regions, the overall conversion margins declined due to sluggish transactions with arrival of the off-season.

As of Friday November 25, SMM copper inventory across major Chinese markets stood at 113,400 mt, down 8,300 mt from Monday and 14,600 mt from last Friday. Compared with Monday's data, the inventory in various regions across China decreased except that in Guangdong. The total inventory was 23,000 mt higher than in the same period last year when the figure was 90,400 mt. Among them, the inventory in Shanghai added 14,300 mt, that in Guangdong dipped 1,600 mt, and that in Jiangsu grew 11,000 mt.

In detail, the inventory in Shanghai dropped 6,800 mt to 77,100 mt from Monday, and that in Jiangsu fell 2,200 mt to 22,400 mt. Inventory in east China dropped as the downstream companies increased their purchases amid the falling copper prices this week. Inventory in Guangdong added 2,100 mt to 9,500 mt. Premiums in Guangdong remained high amid the low inventory. Operating rates of some processing companies dropped, which could be reflected in the recent decline in the daily shipment flowing out of the warehouses in Guangdong. In addition, the large spread between Shanghai and Guangdong boosted the transfer of goods from east China to Guangdong.

Looking forward to the market outlook, near the end of the month, smelters will increase their shipments to alleviate their pressure. The amount of imported copper is not expected to grow significantly. However, the downstream purchases will decline at the end of the month, and the spread of COVID-19 will also have a certain impact on consumption. SMM believes that the weekly inventory next week may rise slightly owing to the growing supply but shrinking consumption.

SMM data shows that zinc ingot social inventories across seven major markets in China totalled 52,900 mt as of November 25, down 7,300 mt from this Monday (November 21) and down 5,900 mt from a week earlier (November 18). The cargoes sent from Yunnan to Shanghai shrank as local transportation was restricted by pandemic, resulting in low inflows into the Shanghai warehouses. At the same time, the purchase improved as zinc prices declined in the second half of the week. As a result, the inventory in Shanghai dropped. In south China, the inflows and outflows of the warehouses were both low, thus the overall inventory changed little. The arrivals in the Tianjin market were extremely scarce as a result of persisting transportation disruption in Inner Mongolia and Gansu as well as the earlier production cuts of Sichuan Sihuan and Western Mining. Therefore, the inventory in Tianjin slipped slightly. Overall, the total inventory in Shanghai, Guangdong and Tianjin fell 7,300 mt, and that across seven major markets in China was also down 7,300 mt. 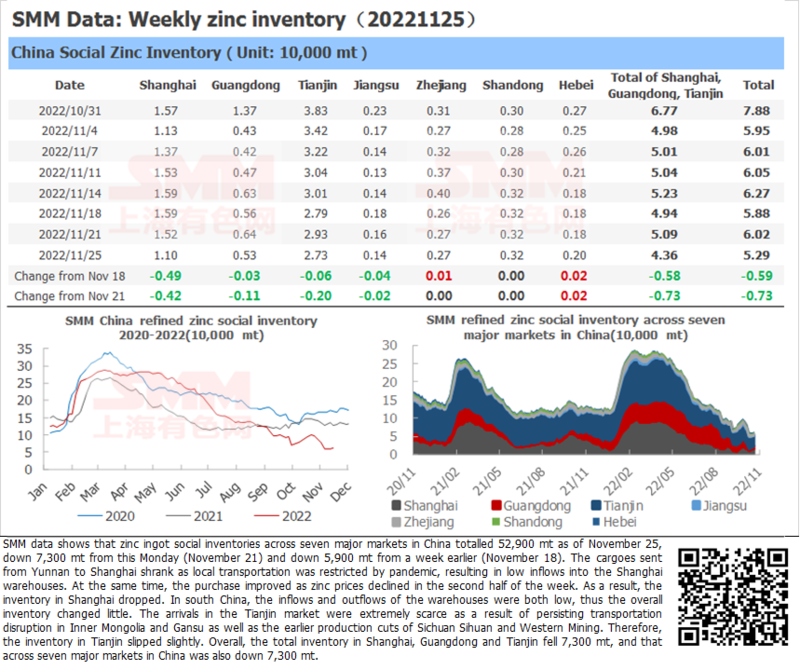 According to research, as the delivery of SHFE 2211 lead contact was finished, the deliverable goods were available in the market. Meanwhile, the signing of November orders is coming to an end, hence some downstream enterprises purchased on dips for stockpiling. At the same time, secondary lead smelters in Henan and Jiangsu either stopped the production or reduced the production due to maintenance, hence the supply reduced regionally. In addition, the pandemic intensified in many places, and the transportation were blocked, which had a great impact on the lead industry chain. Downstream enterprises purchased nearby as needed, hence the social inventory of lead ingot declined. As the impact of the pandemic may extend nex week, the supply of lead scrap will tighten. The social inventory of lead ingot may decline further as the production of smelters is limited. 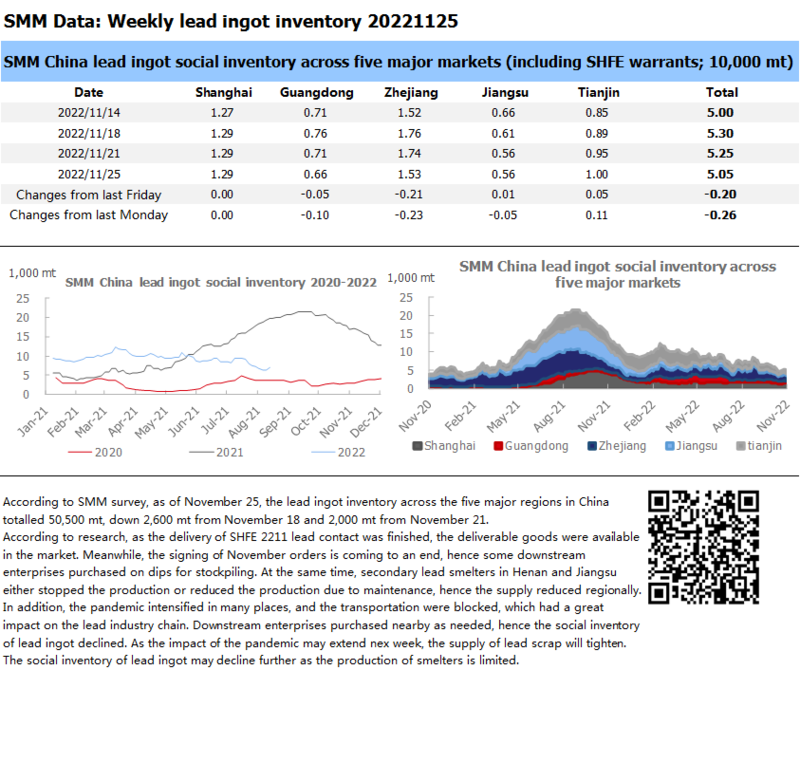 The social inventory of silicon metal across Huangpu port, Kunming city and Tianjin port increased 2,000 mt from the previous week to 117,000 mt as of November 25. The overall social inventory in Kunming city was relatively high, and increased slightly compared with last week. The shipment flow of Tianjin port was extremely light and the inventory remained stable. Affected by the pandemic, the transportation was blocked, hence the inventory of Huangpu port dropped slightly this week. Meanwhile, the market transactions were this. However, as the silicon prices decline and the costs in Sichuan and Yunnan rise, the market sentiment may improve. 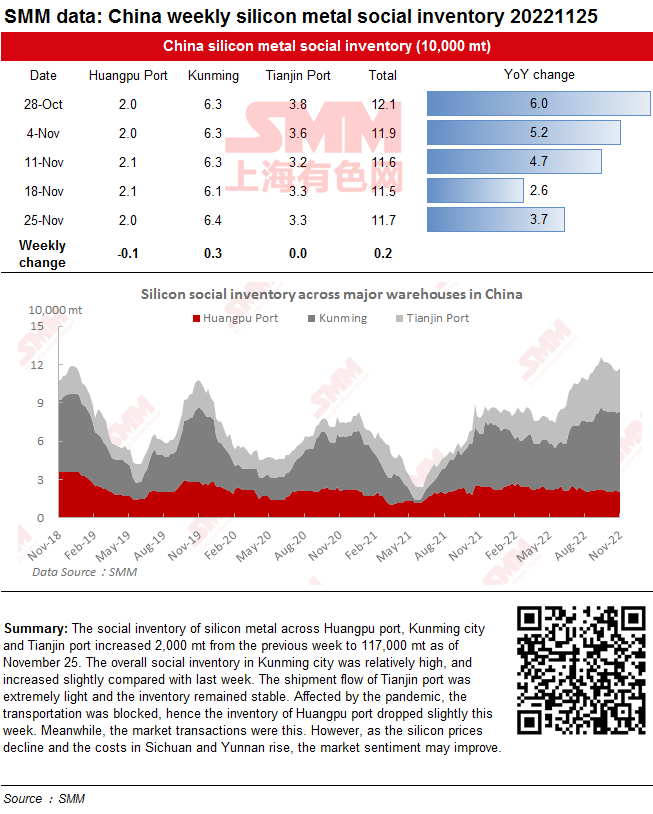 Copper Inventories in Domestic Bonded Zones Up 2,000 mt from November 18

Copper inventories in the domestic bonded zones added 2,000 mt from November 18 to 26,600 mt as of November 25. Inventory in the Shanghai bonded zone grew 2,600 mt to 23,000 mt, and that in the Guangdong bonded zone dipped 600 mt to 3,600 mt. SHFE/LME copper price ratio was not conducive to imports this week, and the customs clearance slowed down. Some traders converted bills of lading into warrants and moved them into bonded warehouses to ship after the price ratio grew, pushing up the bonded zone inventories. 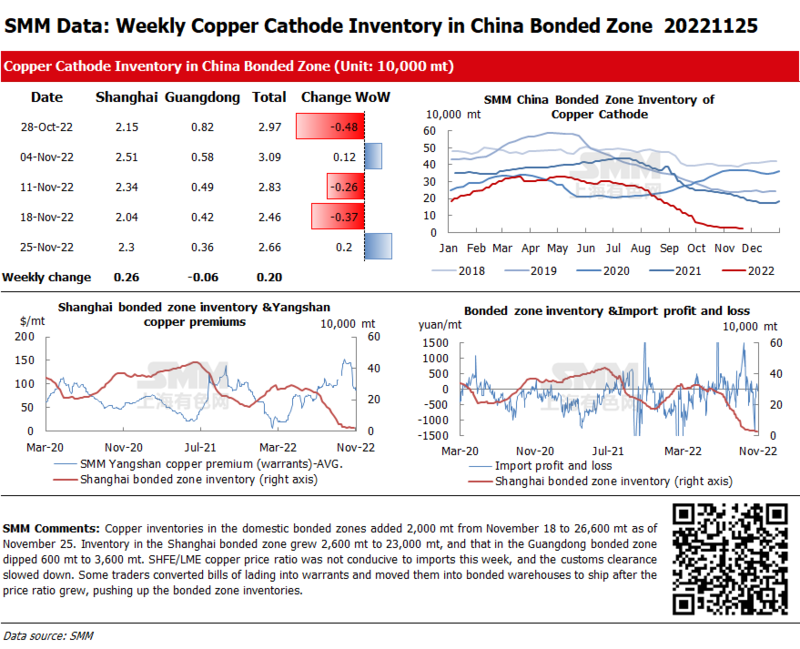 As of November 25, inventory of nickel ore across Chinese ports fell by 98,000 wmt to 8.94 million wmt compared with last Friday. The total Ni content stood at around 70,000 mt. Port inventory of nickel ore across seven major Chinese ports stood at 4.68 million wmt, 108,000 wmt lower than last week. Nickel ore supply remained low, and the shipments flowing out of ports have decreased recently. On the demand side, NPI plants were less willing to purchase high-priced raw materials as the NPI prices dropped, which failed to boost the nickel ore imports. Meanwhile, NPI output grew, resulting in a fall in the in-plant inventories of nickel ore. It is expected that the nickel ore inventory at ports will fall gradually in the near future amid the shrinking supply while stable demand.