CST
Source:SMM
This is a roundup of China's metals weekly inventory as of September 23.

SHANGHAI, Sep 23 (SMM) - This is a roundup of China's metals weekly inventory as of September 23.

SMM aluminium ingot social inventory stood at 666,000 mt as of Thursday September 22, down 9,000 mt from a week ago and 19,000 mt compared with this Monday September 19. The figure was 122,000 mt less than the same period last year and 11,000 lower than the level recorded by end August. In detail, the reductions were mainly found in Wuxi, Nanhai and Hangzhou. The arrivals in Wuxi and Gongyi were affected to varying degrees due to pandemic control measures that restricted rail transportation in Xinjian. In addition, the shipments of aluminium billet from Xinjian were also contained. The inventory in Nanhai fell mainly as a result of the production cuts in Yunnan province. Nonetheless, the open import window will supplement the domestic supply cuts to some extent, but the scale will be limited as the bonded zone inventory is merely 30,000 mt in addition to some direct imports and those in transport. Looking into next week, if the downstream restocking demand is released intensively ahead of the National Day holiday, aluminium ingot social inventory will remain low or fall slightly.

SMM aluminium billet inventory fell 8,800 mt from a week ago to 106,100 mt as of Thursday September 22. Specifically, the inventory in Foshan lost 7,800 mt or 10.64% on a weekly basis due to contracting shipments from places afar like Xinjiang which are with higher freight cost when the local aluminium prices were basically flat from those in east China. In Wuxi and Changzhou, the regional inventory saw a weekly gain of 300 mt and 500 mt respectively, and the buyers still purchased on rigid demand. The inventory in Huzhou fell 2,000 mt amid rising demand before the National Day holiday. The inventory recorded an increase of 200 mt in Nanchang as downstream demand has not yet improved palpably. On the whole, the market sentiment was relatively stable this week as aluminium prices fluctuated narrowly, while pre-holiday restocking pulled down the social inventory to some extent. It is expected that the billet inventory will keep falling slightly in the last trading week ahead of the National Day holiday, when the downstream players are expected to carry on the restocking activates.

According to research, amid the peak season of lead-acid battery and approaching National Day holiday, downstream enterprises purchased as needed for restocking. Secondary lead smelters continued to reduce the production last week, and held the prices firm. The price spread between refined lead and secondary refined lead narrowed to 0. Therefore, downstream enterprises were more willing to purchase primary lead. However, the current in-plant inventory of primary lead was low, hence some downstream purchased nearby. As a result, the social inventory of lead ingots declined. Before the National Day, some downstream enterprises may continue to restock this week. In addition, some smelters have maintenance plans this week. Therefore, the social inventory of lead ingots may further decline in the follow-up period. 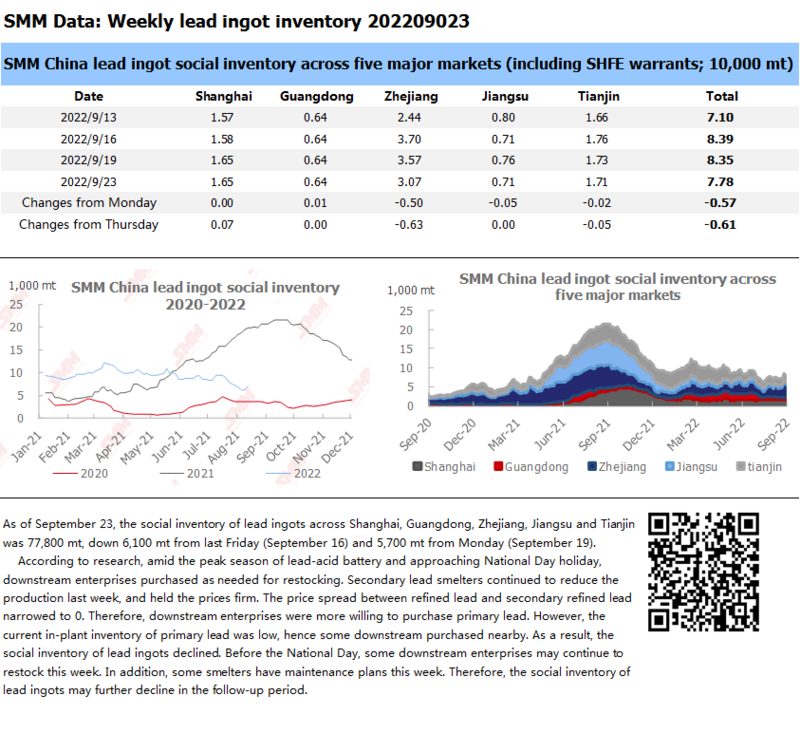 According to SMM statistics, the total zinc ingot inventory across seven major markets in China stood at 92,700 mt as of September 23, down 6,600 mt from a week ago and 3,600 mt from Monday. In the Shanghai market, the Qinlin zinc, which were directly sent by the smelters to the warehouse in Shanghai, have not arrived yet. While the sharply falling premiums still promoted moderate transactions in the market, the inventory in Shanghai fell slightly. It is expected that the inventory in Shanghai will inch higher slightly after Qinlin zinc arrive in the future. In the Guangdong market, the spot supply was relatively abundant with the outflow of warrants. Some traders sold off the zinc ingots on hands, and the downstream buyers purchased on dips out of stocking demand before the National Day holiday. Therefore, the inventory in Guangdong declined slightly. In Tianjin, the arrivals of Hongye zinc increased slightly thanks to the relief of the pandemic, but the overall arrivals were still low. Meanwhile, downstream enterprises received continuous shipments directly from the smelters, which replenished their stocks and led to sluggish transactions in the spot market. As a result, the inventory in Tianjin added slightly. Overall, inventories in Shanghai, Guangdong and Tianjin fell 3,200 mt, and those across seven major markets in China dipped 3,600 mt. 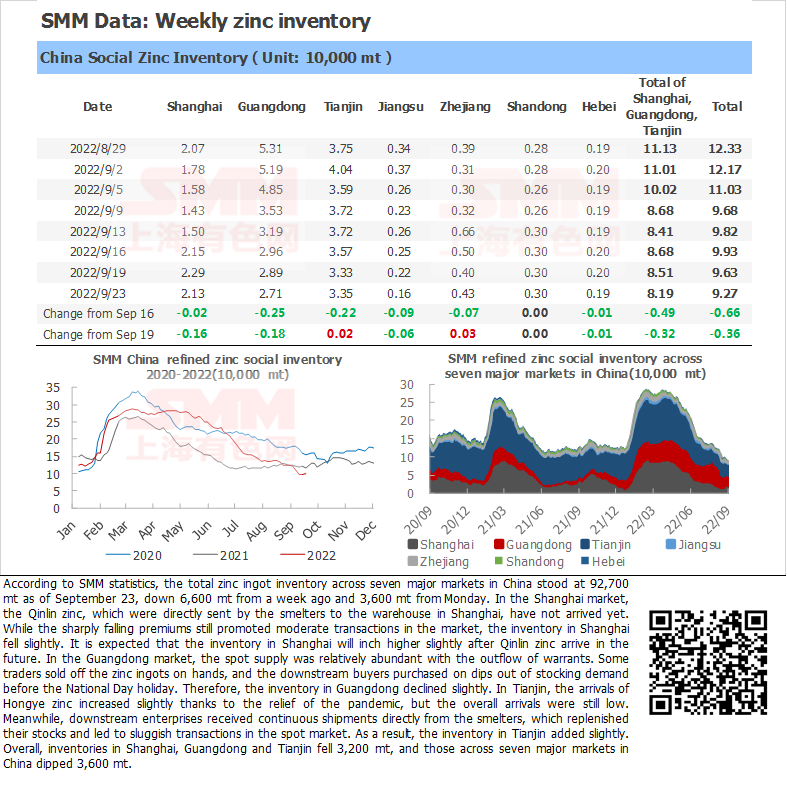 Copper Inventory in Major Chinese Markets down 10,400 mt from Monday

As of Friday September 23, SMM copper inventory across major Chinese markets stood at 74,300 mt, down 10,400 mt from Monday and 10,200 mt from last Friday. Compared with Monday's data, the inventories across various regions fell. The total inventory dipped 29,200 mt compared with the same period last year when the data was 103,500 mt. Among them, the inventory in Shanghai dropped 13,400 mt, that in Jiangsu fell 10,400 mt, and that in Guangdong dipped 6,200 mt. The main reason for the decrease in inventory this week is that downstream consumption has improved after the delivery of the SHFE 2209 contract, and the import clearance volume is not too large.

In detail, the inventory in Shanghai fell 9,100 mt to 59,700 mt compared with Monday. Arrivals of imported copper increased slightly, but those of domestic copper did not rise much. Besides, the downstream restocking demand grew. Inventory in Guangdong decreased slightly by 100 mt to 8,000 mt. On one hand, the arrival of imported copper at the beginning of the week was quickly consumed. On the other hand, the overall downstream consumption was acceptable.

Looking forward, imported copper will arrive at ports continuously before the National Day holiday, but the arrival of domestic copper will stay unchanged. Approaching the National Day holiday (no futures trading during this period), the downstream will restock one after another next week, and the overall consumption is expected to be better than this week, so SMM expects the inventory to decline next week.

Copper inventories in domestic bonded zones fell 16,800 mt from last Friday September 16 to 98,600 mt as of September 23, according to the SMM survey. Inventory fell for the 13th consecutive week, hitting a new low since SMM statistics. Inventory in the Shanghai bonded zone dropped 17,100 mt to 81,800 mt, while that in the Guangdong bonded zone added 300 mt to 16,800 mt. Recently, some banks have begun to shrink or eliminate nonferrous metal businesses, and some warrants in the bonded zone have been disposed of one after another. The SHFE/LME price ratio improved WoW this week, thus the spot import window opened, hence the bonded warehouse warrants were transported to China, resulting in the decline in inventory. 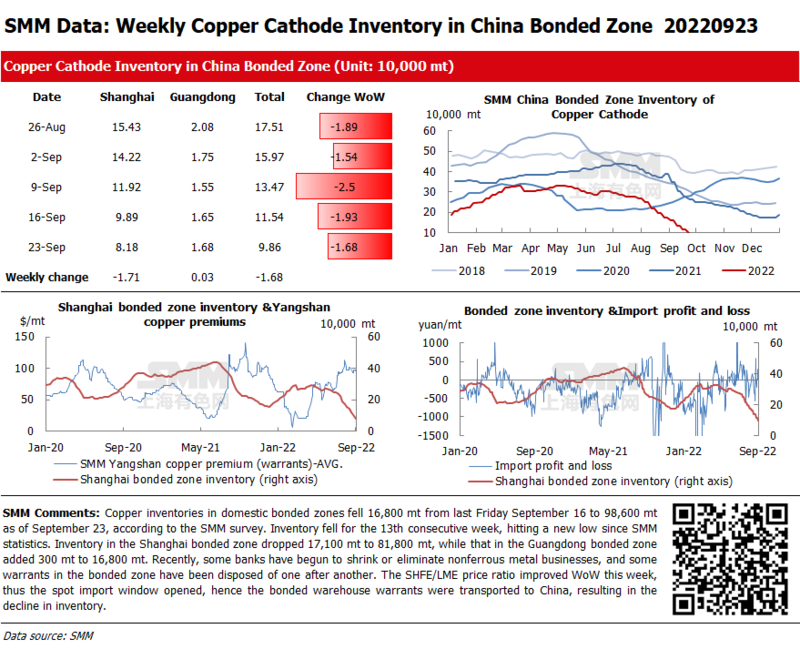 SMM research showed that the bonded zone inventory stood at 5,480 mt this week. The inventory of nickel briquette was 2,250 mt, and that of nickel plate was 3,230 mt. At present, the downstream and terminals markets are recovering. The inventory decreased slightly because the steel mills are expected to resume the production in September, which pushed up the demand for pure nickel despite the small consumption.  In addition, before the National Day holiday, downstream companies were busy in restocking, thus the bonded zone inventory of nickel plates and nickel briquettes changed to varying degrees.

As of September 23, port inventories of nickel ore in China added 322,000 wmt to 7.39 million wmt compared with last week. The total Ni content stood at 58,000 mt. Port inventory of nickel ore across seven major Chinese ports stood at 4.10 million wmt, 272,000 wmt higher than last week. Due to the approaching rainy season and the recovery of downstream markets, the ore trading gradually picked up, and the ore prices rose. On the demand side, the profit recovery of NPI plants and steel mills eased the pressure on nickel ore prices. On the supply side, mines maintained normal shipments amid firm FOB prices. It is expected that due to the demand for raw materials before the rainy season, the import volume of nickel ore will continue to grow, and the port inventory will also rise. During the rainy season, the consumption of raw materials may be slow as the production of NPI may remain low, thus in the long run, the inventory will fall slowly. Social inventories of silicon metal across Huangpu port, Kunming city and Tianjin port increased 5,000 mt from the previous week to 119,000 mt as of September 23.

Last week, the shipment flow of Tianjin port decreased slightly on the week while the inventory of Huangpu port increased. In Yunan, the good in the plant warehouses were shipped to social Inventory due to the the wet season. The social inventory may continue to increase next week. 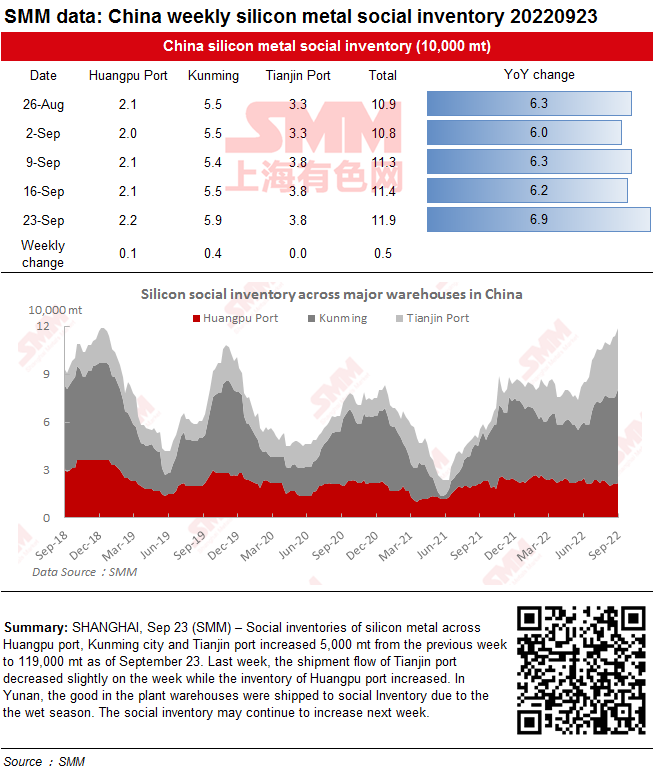