CST
Source:SMM
SHANGHAI, Sep 19 (SMM) - The aluminium ingot social inventories across China’s eight major markets totalled 685,000 mt as of September 19, up 10,000 mt from last Thursday, but down 11,000 mt from the first trading day after the Mid-Autumn Festival.

The inventory has fluctuated greatly in the past two weeks due to the concentrated arrivals during and after the holiday, but the overall inventory has remained at a low level of about 680,000 mt. Inventories in Wuxi, Gongyi, Nanhai and Shanghai all saw small increases when compared with last Thursday as high aluminium prices last week curbed downstream buying willingness. Withdrawals from warehouses in mainstream markets fell sharply to 113,800 mt last week due to disruptions by the Mid-Autumn Festival and squeezed demand for domestic billets following inflows of imported cargoes. Withdrawals from warehouses in Wuxi, Foshan and Gongyi all dropped by more than 10,000 mt. In particular, the daily average withdrawals from warehouses in Gongyi were merely 10,000 mt, with the weekly withdrawals down 15,000 mt as demand was released in advance before the three-day holiday.

With the approaching National Day holiday, downstream buyers will start to stock up this week. The impact of production reduction in Yunnan will begin to be reflected in tighter supply in the spot market. Therefore, the total inventory is unlikely to accumulate in September. If downstream stocking is massive, the inventory may even drop slightly at the end of this month. 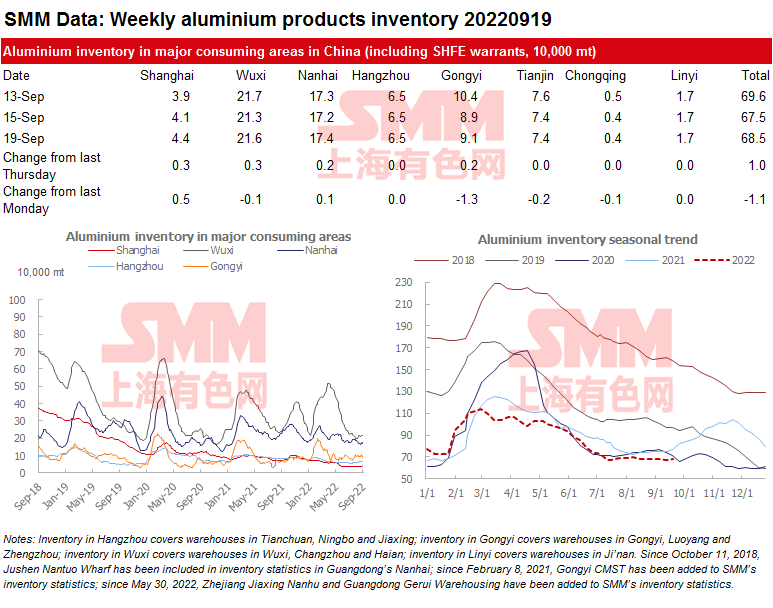