CST
Source:SMM
This is a roundup of China's metals weekly inventory as of September 16.

SHANGHAI, Sep 16 (SMM) - This is a roundup of China's metals weekly inventory as of September 16.

SMM Aluminium Ingot and Billet Social Inventory as of September 15

Aluminium ingot: The aluminium ingot social inventories across China’s eight major markets totalled 675,000 mt as of September 15, up 3,000 mt from last Thursday, but down 21,000 mt from this Tuesday. The figure was also 93,000 mt lower than a year ago and 4,000 mt below that at the end of August. After the Mid-Autumn Festival, trading activities in many regions improved. Wuxi, Foshan and Gongyi maintained the destocking. Some traders in Wuxi were more willing to purchase due to optimism over future spot premiums. While production reductions in Sichuan and Yunnan resulted in fewer arrivals in Foshan, local downstream consumption declined, thus the inventory drop was limited.  Inventory in Gongyi fell thanks to improved downstream purchases. The output cuts by smelters in Yunnan may expand to 20-30%. As such, aluminium inventory is likely to remain at a low level in September.

Aluminium billet: The domestic aluminium billet social inventory dropped 2,700 mt from a week ago to 114,900 mt as of September 15. Inventory in Foshan reversed the previous upward trend and fell 4,900 mt or 6.27%, driven by fewer arrivals from Yunnan and post-holiday downstream restocking. Inventories in Wuxi and Changzhou dropped 600 mt and 400 mt respectively amid rigid demand. In contrast, inventories in Huzhou and Nanchang added 2,000 mt and 1,200 mt respectively due to stable arrivals and poor downstream demand. The orders received by downstream enterprises have barely improved so far this month. Downstream producers will become more willing to stockpile due to fears that the potential output cuts in Yunnan will push up aluminium prices. As such, aluminium billet social inventory may maintain a slight decline in the short term.

According to SMM data, zinc ingot inventories across seven Chinese markets totalled 101,300 mt as of September 16, up 4,500 mt from last Friday (Sep 9) and 3,100 mt from this Tuesday (Sep 13). In the Shanghai market, a large number of Qilin zinc previously shipped from Guangdong arrived in Shanghai this week, and some cargoes under long-term orders headed for Ningbo were also transferred to Shanghai. As a result, the inventory in Shanghai increased significantly during the week. At the same time, trades in Shanghai continued to dip amid high premiums and high zinc prices. Generally, the downstream rigid demand across the country was limited, thus the arrivals of zinc ingots in different markets were stored in the social inventory. Therefore, the inventory in Guangdong fell slightly as fewer local stocks were transferred to other markets. In Tianjin, the pandemic outbreak in Inner Mongolia blocked the transportation of zinc brands such as Bailing and Hongye. Meanwhile, most downstream enterprises restocked on dips after the Mid-Autumn Festival, which led to a decline in the inventory of Tianjin. Overall, Inventories in Shanghai, Guangdong and Tianjin rose 4,700 mt, and inventories across seven Chinese markets increased 3,100 mt. 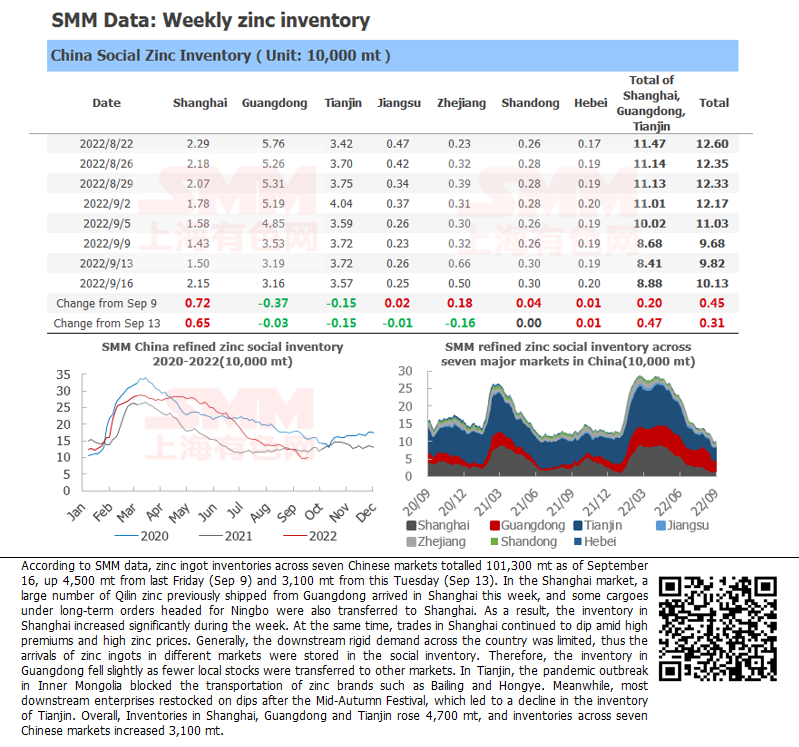 Copper inventories in domestic bonded zones dropped 19,300 mt from September 9 to 115,400 mt as of September 16, according to the SMM survey. Inventories fell for the twelfth consecutive week, hitting a new low since SMM statistics, and the weekly decline narrowed WoW. Inventory in the Shanghai bonded zone dropped 20,300 mt WoW to 98,900 mt, while that in the Guangdong bonded zone added 1,000 mt to 16,500 mt. In Shanghai bonded zone, the inventory declined as goods that were locked in the price ratio previously flowed out of the warehouses continuously. However, the outflow of warrants later was slowed down by the weakening of the SHFE/LME price ratio. The decline in bonded zone inventory may continue to narrow next week. 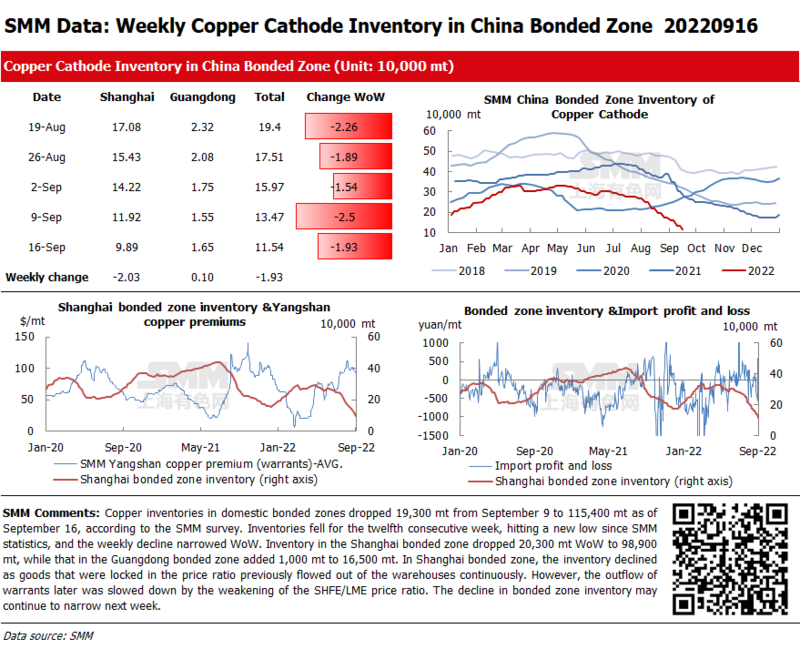 As of Friday September 16, SMM copper inventory across major Chinese markets stood at 84,500 mt, down 5,300 mt from Tuesday but up 13,800 mt from last Friday. Compared with Tuesday’s data, copper inventory in most regions across China decreased except that in Guangdong. The total inventory dipped 27,500 mt compared with the same period last year when the data was 112,000 mt, Among them, the inventory in Jiangsu dropped 13,200 mt, that in Shanghai fell 10,300 mt, and that in Guangdong dipped 5,500 mt. The main reasons for the decrease in inventories this week are the delay in the arrival of imported copper in Shanghai due to the typhoon and the upstream shipped goods directly to the downstream companies amid the high premiums.

In detail, the inventory in Shanghai dipped 4,800 mt to 66,500 mt compared with Tuesday. The inventory increased first and then decreased. At the beginning of this week, the imported copper was cleared in a centralised way, but later, the amount of imported copper was greatly reduced because of the typhoon. In Guangdong, the inventory added 2,000 mt to 10,300 mt. Affected by factors such as the high premiums and the wide spread between the front-month and next-month contracts, the downstream production was not active, and the operating rates of many downstream companies stood at about 50%, which can also be reflected in the continuous decline in the average daily shipment flowing out of the warehouses in Guangdong.

Looking ahead, import volume in Shanghai is expected to increase next week after the typhoon, and domestic copper arrivals may also rise due to growing production. The consumption may bottom out. Therefore, the inventory next week will rise slightly amid the booming supply and demand.

According to the survey, some secondary lead have smelters completed the maintenance this week, hence the supply recovered. At the same time, goods were delivered to the warehouses due to the delivery of the SHFE 2209 lead contract. Most goods were delivered to the warehouses in Zhejiang warehouse, and a small number of goods were delivered to the warehouses in Tianjin and Shanghai. As the lead prices fell below 15,000 yuan/mt, the prices of some warrants were lower than that of secondary refined lead. Therefore, the downstream enterprises were more motivated to purchase on dips. In this scenario, some lead inventories declined. Next week, the delivery of SHFE lead contract will finish, but the additional maintenance may lead to output reduction. In addition, as the current lead consumption is still acceptable, the inventory may decline slightly. 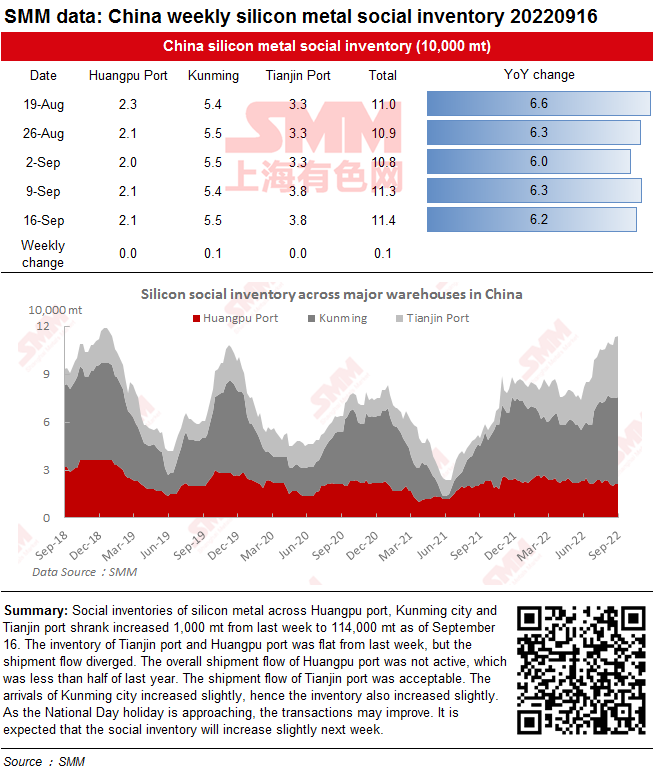 Nickel ore Inventories at Chinese Ports up 426,000 wmt on Week

As of September 16, port inventories of nickel ore in China added 426,000 wmt to 7.06 million wmt compared with last week. The total Ni content stood at 55,500 mt. Port inventory of nickel ore across seven major Chinese ports stood at 3.83 million wmt, 276,000 wmt higher than last week. The rainy season is approaching, thus the restocking demand for nickel ore increased. Besides, the improved market eased the downstream’s costs pressure as the demand for raw materials recovered. On the supply side, shipment volume also rose after demand improved, and port inventories grew. It is expected that in the short term, NPI plants’ demand for nickel ore will increase further, and the port inventory will also rise. 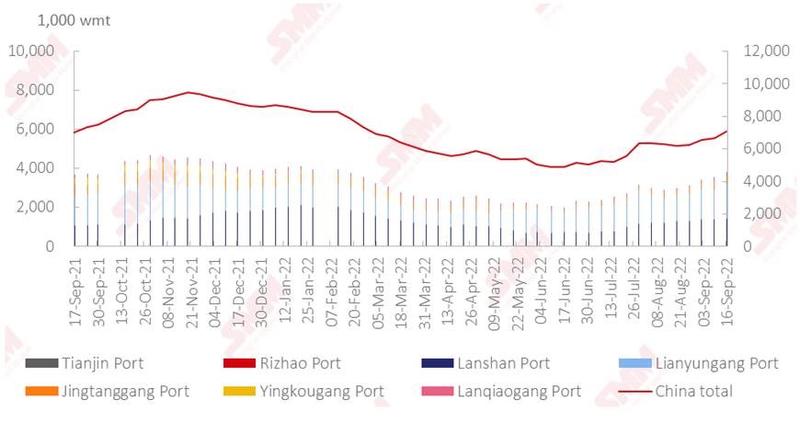