CST
Source:SMM
According to SMM data, the zinc ingot inventories across seven major markets in China totalled 98,200 mt as of 9 September, up 1,400 mt over the weekend and down 12,100 mt from the previous week.

SHANGHAI, Sep 13 (SMM) - According to SMM data, the zinc ingot inventories across seven major markets in China totalled 98,200 mt as of 9 September, up 1,400 mt from last Friday and down 12,100 mt from the previous week. In the Shanghai market, the arrivals of zinc ingots transferred from Guangdong were still low during the Mid-Autumn Festival holiday as most of them were sent to the Ningbo market. In addition, due to the high premiums in Shanghai, the downstream buyers were not active in picking up cargoes. Therefore, the inventory in Shanghai accumulated slightly over the weekend. It is expected that the zinc ingots from Guangdong will arrive in the upcoming two days. The inventory in Guangdong declined further over the weekend as the relatively huge price difference among Shanghai, Tianjin and Guangdong prompted most traders in Guangdong to ship zinc ingots to downstream enterprises across the nation, or directly to Shanghai. In Tianjin, some downstream enterprises restocked ahead of the Mid-Autumn Festival holiday, while there were also arrivals of zinc ingots shipped from other areas to downstream enterprises. As a result, the change in the inventory of Tianjin was small. On the whole, inventories in Shanghai, Guangdong and Tianjin slipped 2,700 mt, and inventories across seven major markets in China gained 1,400 mt. 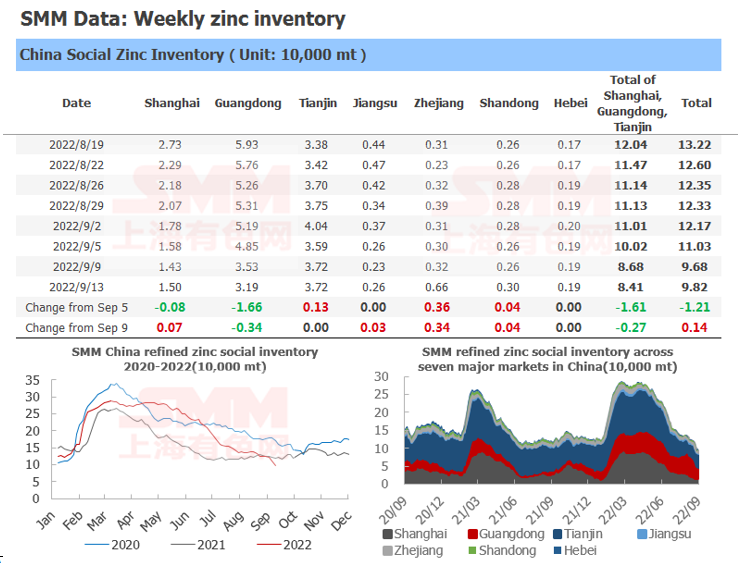