CST
Source:SMM
This is a roundup of China's metals weekly inventory as of September 9.

SHANGHAI, Sep 9 (SMM) - This is a roundup of China's metals weekly inventory as of September 9.

SMM Aluminium Ingot and Billet Social Inventory as of September 8

Aluminium ingot: The aluminium ingot social inventories across China’s eight major markets totalled 672,000 mt as of September 8, down 11,000 mt from a week ago and 73,000 mt from a year ago. Wuxi, Foshan and Gongyi all experienced small-scale destocking. The market transactions in east China and Gongyi weakened this week, but stockpiling by some downstream companies ahead of the Mid-Autumn Festival allowed the local inventory to drop slightly. Inventory in Foshan also declined as the previous output cuts in Sichuan led to fewer arrivals in the region. Considering that it is difficult for Sichuan's output to fully recover in September, the overall inventory will stay at a low level.

Aluminium billet: The domestic aluminium billet social inventories decreased by 2,100 mt on a weekly basis as of September 8. Except for an accumulation in Foshan, all the other regions saw a decline in their inventories. Large arrivals and only a slight improvement of downstream demand pushed up the inventory in Foshan. Inventories in Wuxi and Huzhou declined 2,600 mt and 2,000 mt respectively thanks to pre-holiday stocking. Inventories in Changzhou and Nanchang dropped slightly. Market sentiment has shown signs of improvement, even though downstream order situation has not yet shown significant recovery so far this month, which should have been the start of the peak season. Bullishness towards aluminium prices amid the power shortages in Yunnan and the upcoming holiday drove downstream buyers to stock up at low prices, contributing to the destocking process.

In detail, the inventory in Shanghai added 5,400 mt to 58,300 mt compared with Monday. The inventory declined first and then rose this week. At the beginning of the week, the arrival of imported copper was delayed due to the typhoon, which then arrived at ports on Thursday afternoon and Friday. In Guangdong, the inventory decreased 8,000 mt to 8,200 mt. At the beginning of this week, the imported copper arrived in Guangdong in a centralised way, but after that, the arrivals of both imported and domestic copper were small. Besides, before the Mid-Autumn Festival holiday, enterprises produced actively. In Chengdu and Chongqing, shipment from smelters grew with the lift of power rationing. In Tianjin, the arrival decreased owing to the pandemic outbreak in Chifeng.

Looking forward, during the Mid-Autumn Festival, the arrivals of domestic and imported copper may be centralised. After the holiday, approaching the delivery of the SHFE 2209 contract, the downstream restocking will be poor next week amid the wide spread between the front-month and next-month contracts. SMM believes that the inventory next week will rise.

According to SMM data, the total zinc ingot stocks across seven major markets in China stood at 96,800 mt as of September 9, down 24,900 mt week-on-week and 13,500 mt from Monday. The inventory in Shanghai dropped slightly as most downstream buyers were reluctant to purchase amid high premiums, except that some enterprises restocked on rigid demand before the Mid-Autumn Festival holiday. In Guangdong, the warrants declined significantly, and traders started to sell in the market. However, since the premiums in Guangdong was lower than those in other markets, some good traders shipped a large amount of zinc ingots to Shanghai and a small amount to Ningbo and Tianjin. As a result, the inventory in Guangdong decreased considerably in addition to the increased stockpiling of downstream enterprises ahead of the Mid-Autumn Festival holiday. The inventory in Tianjin rose slightly with more arrivals in the market and sluggish purchasing demand of downstream enterprises. Overall, the total inventory in Shanghai, Guangdong and Tianjin fell 13,400 mt, and that across seven major markets in China sank 13,500 mt from Monday. 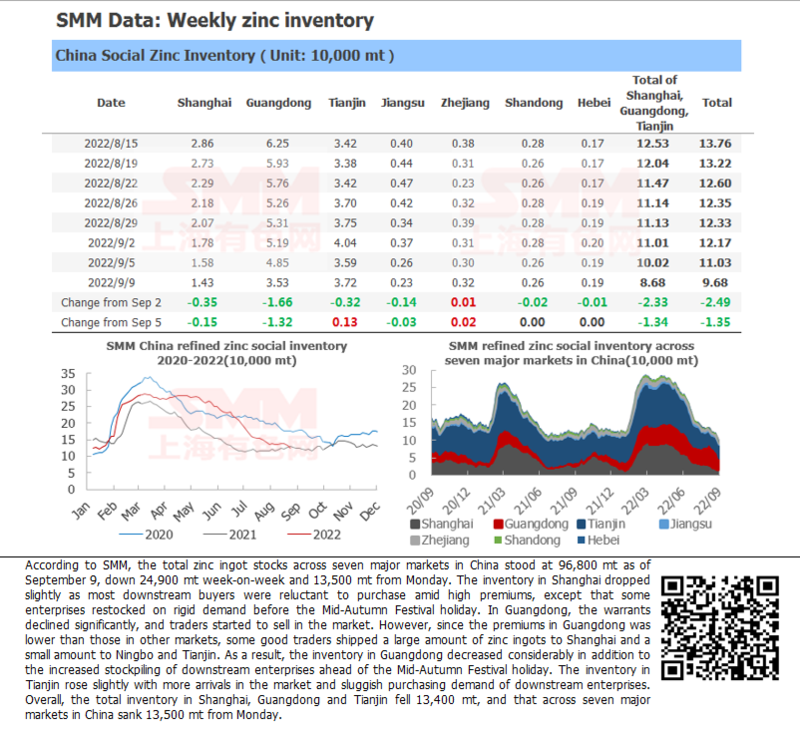 As of September 9, port inventories of nickel ore in China added 108,000 wmt to 6.64 million wmt compared with last week. The total Ni content stood at 52,500 mt. Port inventory of nickel ore across seven major Chinese ports stood at 3.55 million wmt, 138,000 wmt higher than last week. Nickel ore gradually arrived at ports this week, while the NPI plants did not increase their production significantly. The demand picked up somewhat. Prices of stainless steel and NPI rose and their profits were restored, easing the pressure on ore prices. At the same time, the inquiries recovered, thus the import volume of nickel ore may gradually rise in the future. However, the long-term NPI surplus has not changed. Although the stockpiling period before the rainy season has arrived, NPI plants are still cautious about restocking. It is expected that the increase in port inventory of nickel ore will be small, and the inventory will remain at a low level. As of September 9, the social inventory of lead ingots across Shanghai, Guangdong, Zhejiang, Jiangsu and Tianjin was 71,800 mt, down 3,200 mt from last Friday (September 2) and up 1,900 mt from Monday (September 5).

According to the survey, primary lead smelters produced stably and the supply increased stably. However, most large-sized secondary lead smelters reduced the production due to losses, hence the supply of lead ingots tightened regionally. In this scenario, there was almost no price spread between primary lead and secondary refined lead. Therefore, downstream enterprises preferred to purchase primary lead. Meanwhile, lead prices increased last week, and SHFE lead prices exceeded 15,000 yuan/mt. Downstream enterprises were less willing to purchase high-priced lead. Traders quoted in discounts of 200 yuan/mt over the SHFE 2210 lead contract, and the price spread between spots and futures expanded. In addition, amid the approaching delivery of the SHFE 2209 lead contract, some cargo holders planned to deliver, hence the social inventory of lead ingots increased in the second half of the week. After the Mid-Autumn Festival holiday, cargo holders will speed up the delivery 2 days before the delivery date. It is expected that the social inventory of lead ingots will increase. 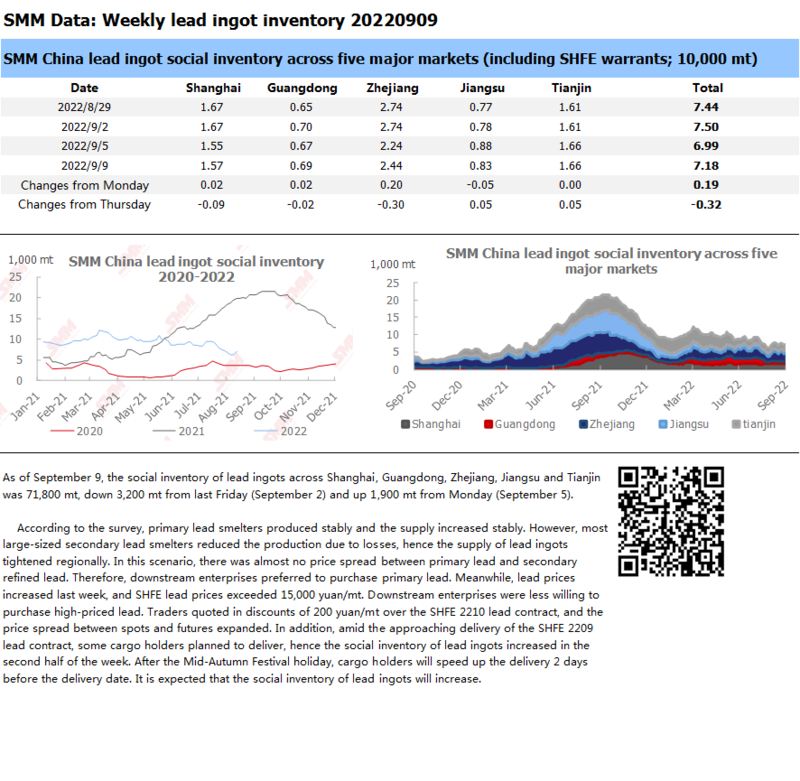 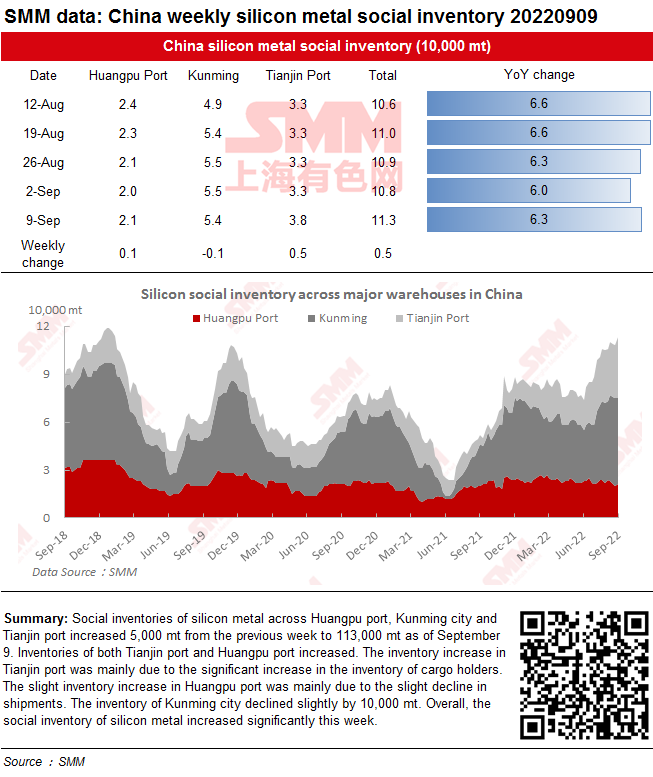 All
MOST POPULAR
1.China Weekly Inventory Summary and Data Wrap (Sep 23)
2.China Weekly Inventory Summary and Data Wrap (Sep 16)
3.Manganese Ore Shipments at Tianjin Port Are Disrupted by Worsening Pandemic Situation
4.Exports of SiMn Alloy Fell Sharply by 71% in August amid Weak Overseas Demand
5.Imports of Chrome Ore Continued to Fall, Can Prices Remain High amid the Expectation of Consumption Improvement?
Shanghai Metals Market
Privacy PolicyCompliance CentreSMM Credit ServiceContact UsAbout UsTerms & ConditionsSitemap
Notice: By accessing this site you agree that you will not copy or reproduce any part of its contents (including, but not limited to, single prices, graphs or news content) in any form or for any purpose whatsoever without the prior written consent of the publisher.