CST
Source:SMM
According to SMM data, the zinc ingot inventories across seven major markets in China totalled 123,300 mt as of August 29, down 2,700 mt on a weekly basis and 200 mt over the weekend.

SHANGHAI, Aug 29 (SMM) - According to SMM data, the zinc ingot inventories across seven major markets in China totalled 123,300 mt as of August 29, down 2,700 mt on a weekly basis and 200 mt over the weekend. As most smelters shipped goods to the Tianjin market, the arrivals in the Shanghai market continued to be low, thus the inventory in Shanghai decreased. In Guangdong, the delivery from local market to Tianjin dropped with narrowed price spread between the two markets. At the same time, the sluggish downstream consumption weakened the rigid demand, thus the inventory in Guangdong fell slightly. In the Tianjin market, thanks to the high premiums, both smelters and traders preferred to transfer goods to here, which led to increasing arrivals. Therefore, the inventory in Tianjin inched higher slightly. Overall, the total inventory in Shanghai, Guangdong and Tianjin fell 100 mt, and that across seven major regions in China declined 200 mt from last Friday. 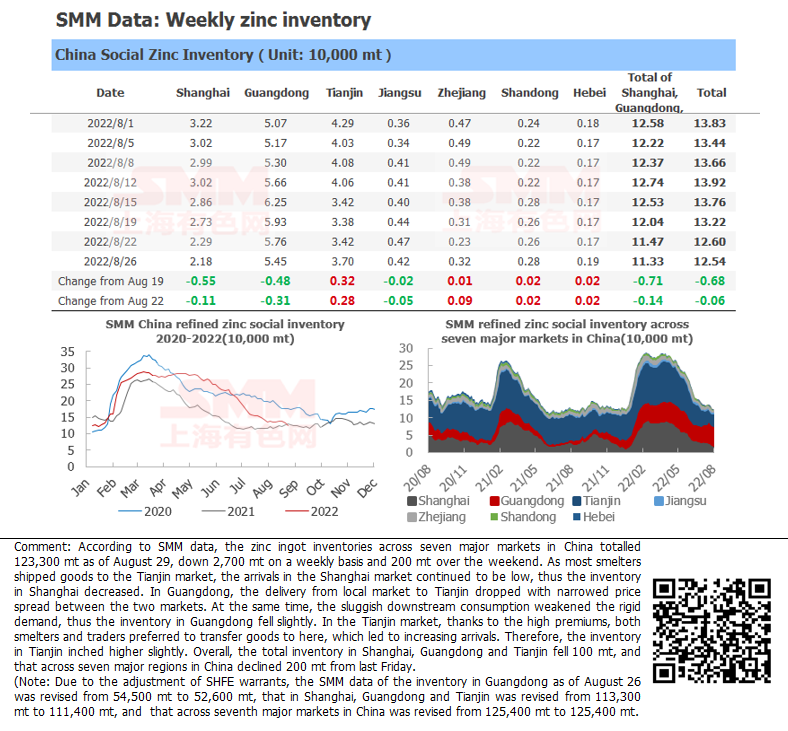