CST
Source:SMM
SMM data shows that the zinc ingot inventories across seven major markets in China totalled 132,200 mt as of August 19, down 5,400 mt from this Monday and 7,000 mt on a weekly basis.

SHANGHAI, Aug 19 (SMM) - SMM data shows that the zinc ingot inventories across seven major markets in China totalled 132,200 mt as of August 19, down 5,400 mt from this Monday and 7,000 mt on a weekly basis. In particular, the arrivals in Shanghai market were low because some smelters had shipped zinc ingot to the downstream enterprises in other regions in advance. Shuangyan zinc could hardly be found in the spot market. The zinc prices remained high under the impact of the production reduction in European smelters, and the inventory in Shanghai continued to drop slightly as traders purchased on rigid demand. The inventory in Guangdong also fell slightly in that enterprises purchased on dips due to low arrivals and weak consumption. As for the Tianjin market, some smelters in Inner Mongolia have not returned to normal production, and shipments from Xinjiang were restricted due to local pandemic outbreak. Therefore, the arrivals at the market continued to stay low, and currently, the 0# zinc ingots were in acute shortage in the Tianjin market. Quotations were rarely heard in the market, and the downstream enterprises only purchased on rigid demand, thus the inventory in Tianjin barely changed. Generally, the total inventories in Shanghai, Guangdong and Tianjin fell 4,900 mt, and the inventories across seven major regions in China declined 5,400 mt from this Monday. (Note: The inventory in Guangdong on Monday has been revised from 132,300 mt to 137,600 mt) 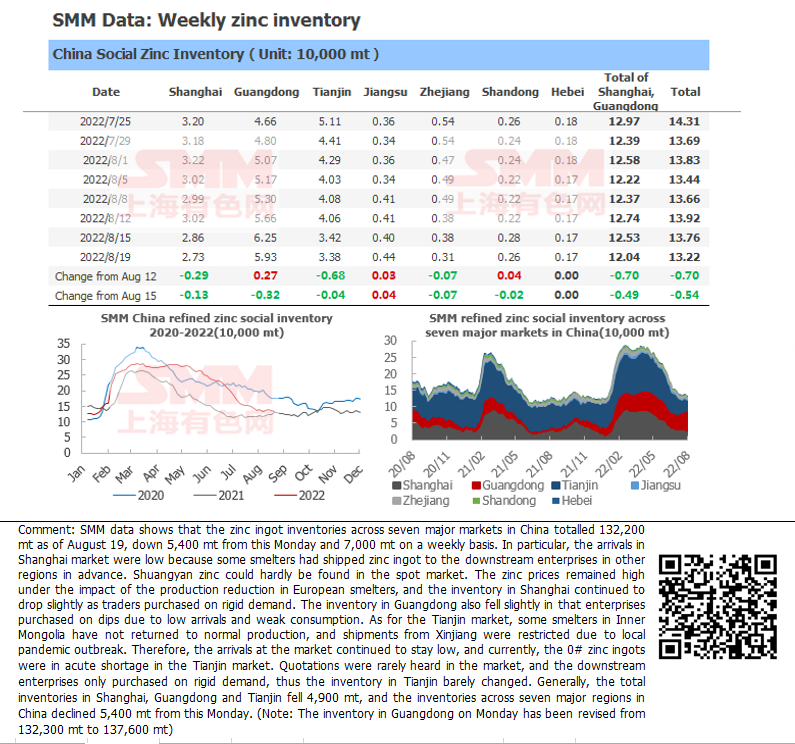