CST
Source:SMM
This is a roundup of China's metals weekly inventory as of August 12.

SHANGHAI, Aug 12 (SMM) - This is a roundup of China's metals weekly inventory as of August 12.

SMM Aluminium Ingot and Billet Social Inventory as of August 11

Aluminium ingot: The aluminium ingot social inventories across China’s eight major markets totalled 693,000 mt as of August 11, up 15,000 mt from last Thursday, but 46,000 mt lower than in the same period last year. The figure was 23,000 mt higher than at the end of July. The inventory of aluminium ingots has been accumulating for three consecutive weeks, with an increase of 23,000 mt so far this month. Except for a slight drop in Wuxi, where the arrivals were limited, inventories rose across all the other regions. Inventories in Foshan and Chongqing added by 3,000 mt and 4,000 mt respectively, and those in Gongyi jumped 16,000 mt due to concentrated arrivals. At present, the downstream demand is weak. The rebound of aluminium prices has further suppressed purchasing sentiment. As such, aluminium ingot inventory may climb further.

Aluminium billet: The domestic aluminium billet social inventory increased by 5,100 mt when compared with last Thursday. This marked five consecutive weeks of growth.  Inventory in Foshan rose from 49,100 mt in mid-July to current 81,600 mt, and increased by 2,200 mt or 2.77% on a weekly basis as of today. Given the poor consumption, inventory in Foshan is unlikely to fall. Except for a drop of 1,000 mt in Huzhou, inventory in other areas showed varying degrees of accumulation. Except for rigid demand, downstream purchases were poor amid high aluminium prices. One aluminium smelter cut output in the wake of an accident, but this had little impact on total output. Aluminium billet inventory will probably continue to grow next week.

SMM data shows that as of August 12, the zinc ingot inventory across the seven major regions in China totalled 139,200 mt, up 2,600 mt from Monday (August 8) and up 4,800 mt week-on-week. The inventory in Shanghai rose slightly despite low arrivals as downstream demand weakened amid high zinc prices. In Guangdong market, the transfer of zinc ingots from Nanchu’s warehouse to Jushen’s warehouse was completed, and the inventory of Jushen was full. In addition, the supply of deliverable brands in the market was tight due to the approaching delivery of SHFE 2208 contract, and the premiums increased. But, supply of other non-deliverable brands was still relatively ample. As a result, the inventory in Guangdong accumulated due to limited downstream purchases. The Tianjin market was quiet during the week amid low arrivals as some goods holders were reluctant to sell. At the same time, downstream enterprises purchased at lows on rigid demand, resulting in a slight decrease in Tianjin inventory. Overall, inventories in Shanghai, Guangdong and Tianjin rose 3,700 mt, and inventories across seven major markets in China added 2,600 mt. 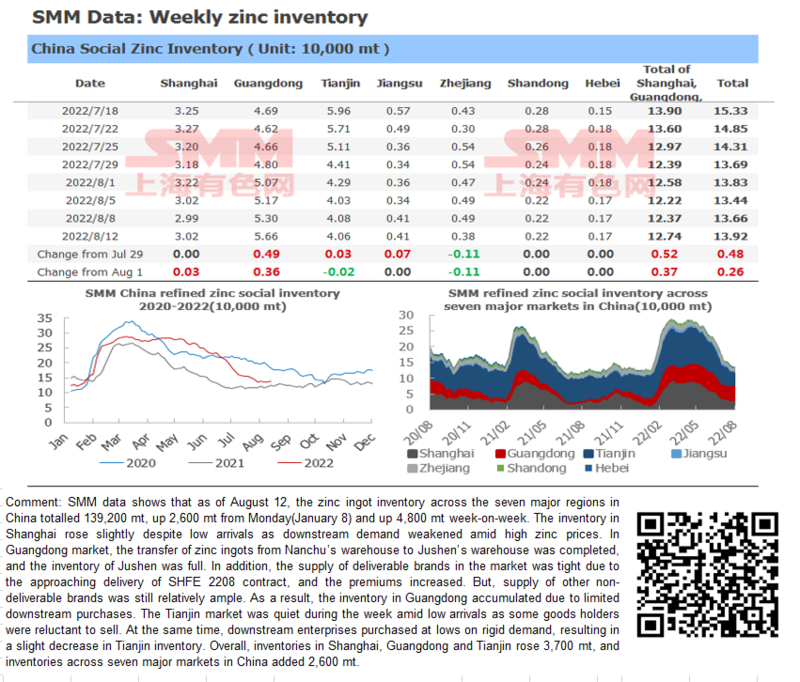 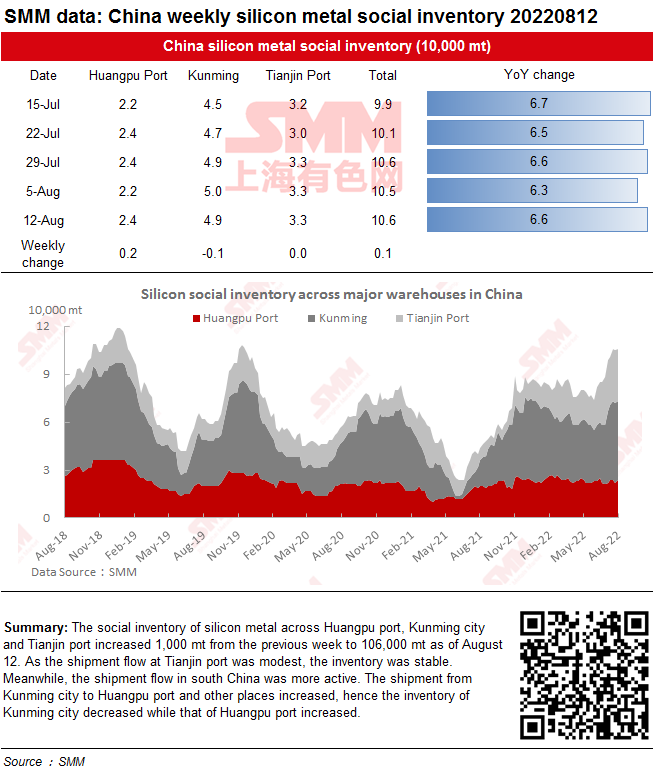 According to research, the deliverable goods gradually arrived at social warehouses one working day before the delivery date of SHFE 2208 lead contract. Therefore, the lead ingot social inventory increased as expected. The inventory of Zhejiang, Shanghai, Tianjin, etc. increased more significantly while the inventory in Guangdong increased slightly due to the impact of the warrants pledge scandal of aluminium in the early stage. It is also worth noting that the LME lead prices rose while the SHFE lead prices fell, hence the SHFE/LME price ratio narrowed rapidly. In this scenario, the export window of lead ingot reopened. SMM will pay attention to the impact of the export on the social inventory after the delivery is over. 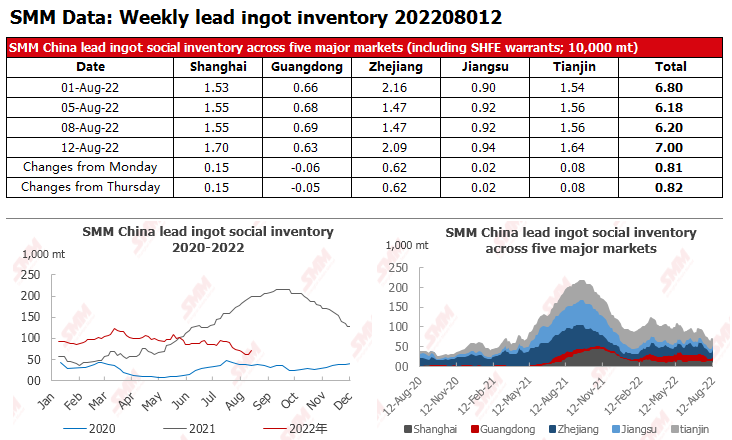 As of August 12, the nickel ore inventory at Chinese ports dipped 40,000 wmt from a week earlier to 6.289 million wmt. The total Ni content stood at 49,000 mt. Port inventory of nickel ore across seven major Chinese ports stood at 2,908,000 wmt, 100,000 wmt lower than last week. The inventory remained rangebound, and the market supply was tight. On the demand side, steel mills and NPI plants still cut their production, and the demand for raw materials was poor, which further affected the import volume and rhythm. On the supply side, mines would not ship amid the low ore prices. The short-term port inventory of nickel ore will hover around the current level. 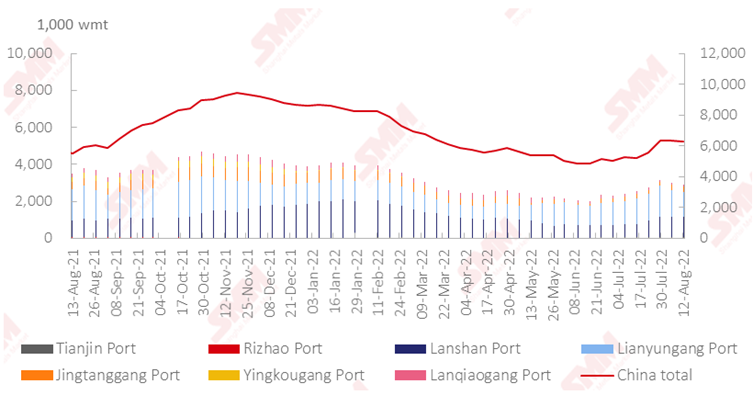 Copper inventories in domestic bonded zones decreased by 32,700 mt from last Friday August 5 to 216,600 mt as of August 12, according to the SMM survey, the biggest drop in a single week in 2022. Inventory in the Shanghai bonded zone dipped 31,100 mt to 191,800 mt, and inventory in the Guangdong bonded zone fell 1,600 mt to 24,800 mt. In China, the supply and demand were relatively tight, and the inventory kept falling, boosting the demand for imported copper. In addition, the demand for customs declaration also rose, and Yangshan copper premiums continued to increase. However, the quantity of goods shipped to the bonded warehouses from the smelters also dropped significantly, resulting in a further decline in the bonded zone inventory. 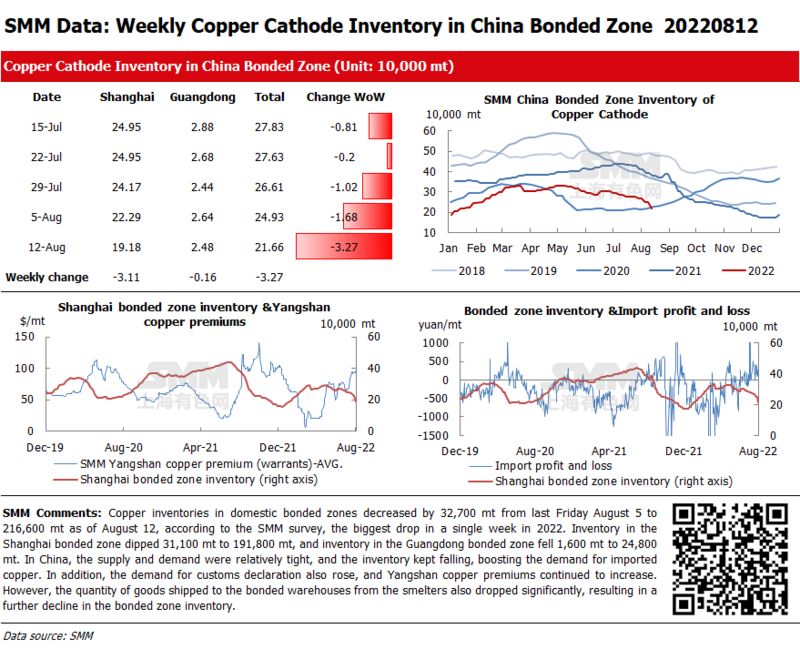 At the beginning of the week, affected by the domestic and overseas nickel futures prices, the imports of overseas pure nickel spots remained profitable though the SHFE/LME nickel price ratio narrowed. According to SMM research, the bonded zone inventory stood at 6,500 mt this week. The inventory of nickel briquette was 3,400 mt, and that of nickel plate was 3,100 mt, a decrease of 500 mt WoW, because the spot transactions improved slightly at the beginning of the week. However, with the rebound of SHFE nickel prices, the demand for pure nickel weakened.

As of Firday August 12, SMM copper inventory across major Chinese markets stood at  70,700 mt, down 2,100 mt from Monday, but up 1,800 mt from last Friday. Compared with Monday's data, inventories in most regions across China increased except that in Shanghai. The total inventory dropped by 88,800 mt compared with the same period last year when the inventory was recorded at 159,500 mt, Among them, the inventory in Guangdong dropped by 41,800 mt, and the inventory in Shanghai dipped by 41,300 mt. The main reasons for the increase in inventory this week are as follows. 1. The arrival of imported copper increased slightly. 2. Smelters that were overhauled earlier resumed the normal production one after another, but the output of some smelters in central China was reduced by the hot weather, so the overall domestic supply increased only slightly.

In detail, the inventory in Shanghai decreased by 3,600 mt to 53,900 mt compared with Monday. The supply and demand in east China declined to a certain extent due to the power rationing. The inventory in Guangdong  rose by 1,400 mt to 7,600 mt as the shipments from smelters and traders rose amid the wide spread between Shanghai and Guangdong.

Looking forward, with the impact of power rationing, the situation of supply and demand in east China becomes uncertain, and it is expected that there will be a decrease in both supply and demand. However, in other areas, the supply will increase, and the demand will also grow due to the falling premiums after the delivery of the SHFE 2208 copper contract. Therefore, it is difficult to forecast the weekly inventory next week.