SHANGHAI, Jul 25 (SMM) - SMM data shows that the total zinc ingot inventories across seven major markets in China totalled 143,100 mt as of July 25, down 5,400 mt from July 22 and 10,200 mt from July 18. The inventory in Shanghai dropped slightly as zinc prices fluctuated at high levels while downstream enterprises mainly purchased at lows on rigid demand. The stocks in Ningbo witnessed dramatic decline as most good holders transferred their cargoes from the Jiulong warehouse, which were not available before, to Quansheng warehouse. The inventory in Guangdong basically remained unchanged with low arrivals and relatively stable rigid demand. Stocks in Tianjin fell as most downstream enterprises, whose operating rates rose slightly, picked up their cargoes at the weekend amid unstable arrivals. Overall, inventories in Shanghai, Guangdong and Tianjin fell 6,300 mt, and inventories across seven major markets in China decreased 5,400 mt over the weekend. 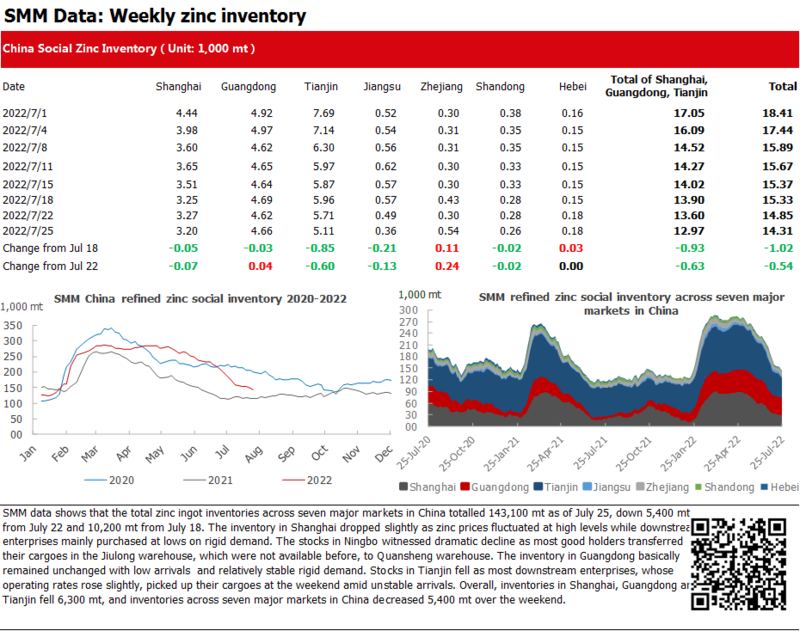