CST
Source:SMM
This is a roundup of China's metals weekly inventory as of July 22.

SHANGHAI, Jul 22 (SMM) - This is a roundup of China's metals weekly inventory as of July 22.

SMM Aluminium Ingot and Billet Inventory both Dropped on Week

SMM China aluminium ingot inventory stood at 668,000 mt as of Thursday July 21, down 29,000 mt from last Thursday and 161,000 mt from a year ago. The ingot social inventory began to fall again in July. Wuxi saw a weekly reduction of 15,000 mt due to delayed arrivals and shipments, and most arrivals are in transportation after the pandemic situation improves. The inventory in Gongyi is being digested with local manufacturers starting to purchase, alleviating local inventory pressure. The aluminium ingot social inventory is likely to remain low based on the current rhythm of arrivals and shipments.

SMM zinc ingot social inventories across seven major markets in China stood at 148,500 mt as of July 22, down 3,000 mt from July 15 and 4,800 mt from July 18. The inventory in Shanghai increased slightly as purchase slowed down amid increasing zinc prices and fewer transactions were made due to high spot premiums. The inventory in Guangdong dropped slightly with reduced arrivals in the market and relatively stable rigid demand. In Tianjin, the arrivals in the market remained low and the zinc backwardation expanded. Therefore, the inventory declined slightly as the spot premiums remained high and the downstream producers restocked on dips. Overall, inventories in Shanghai, Guangdong and Tianjin fell 3,000 mt from July 18, and inventories across seven major markets in China decreased 4,800 mt. 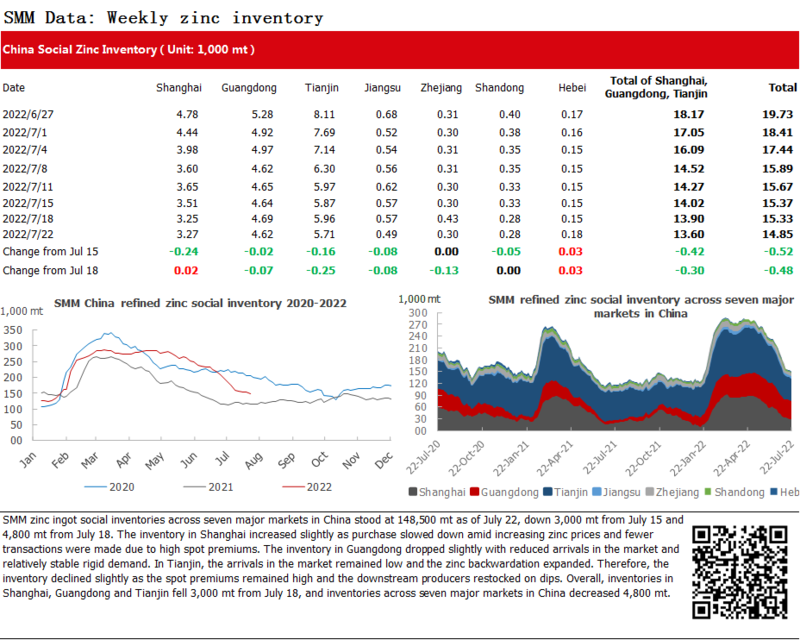 The inventory in Guangdong decreased sharply with a weekly drop of 8,100 mt, mainly due to the decrease in import volume and shipments flowing into the warehouses in Guangdong, while the downstream consumption was fair. The decline in Shanghai inventory was smaller than that in Guangdong inventory. Last week, the inflow of copper remained at low levels, and a large amount of copper that arrived last weekend was consumed, thus the spot premiums maintained firm. The inventory in other regions of China changed little.

Copper inventories in domestic bonded zones decreased by 2,000 mt from last Friday July 15 to 276,300 mt as of Friday July 22, according to the SMM survey. The bonded zone inventory has dropped for four consecutive weeks, but the speed was significantly slowed down. The inventory in Shanghai bonded zone stood unchanged at 249,500 mt WoW, while that in Guangdong dropped by 2,000 mt to 26,800 mt. Recently, the trading in the import market was poor. The import losses fluctuated around 350 yuan/mt over the SHFE 2208 copper contract this week, which could not offer solid support to the exports. Besides, the shipments of warrants out of the warehouses were limited, and the arrival of imported copper was flowing into the bonded warehouses one after another, hence the inventory this week dropped only slightly.

The price ratio gradually recovered this week, and the spot imports gained considerable profits even though the US dollar was high. According to SMM research, the bonded zone inventory stood at 6,500 mt this week. The inventory of nickel briquette was 2,900 mt, and that of nickel plate was 3,600 mt, a decrease of 1,300 mt WoW. The lower nickel inventory was contributed by the falling futures prices, the better demand for overseas pure nickel that was aroused by the improvement of the domestic alloy sector, and the recovered SHFE/LME nickel price ratio.

According to SMM statistics, the social inventory of silicon metal across Huangpu port, Kunming city and Tianjin port totalled 101,000 mt as of July 22, up 2,000mt from the previous week. On the whole, the inventories of silicon metal in north and south China were relatively flat with slow inflow and outbound shipment. Specifically, in north China, the inventory declined slightly with low arrivals at Tianjin port. In south China, the inventories in Huangpu port and Kunming city both increased, with more cargoes to arrive at the Huangpu port. The inventories of most silicon plants increased slightly year-on-year. The total social inventory is expected to remain high next week. 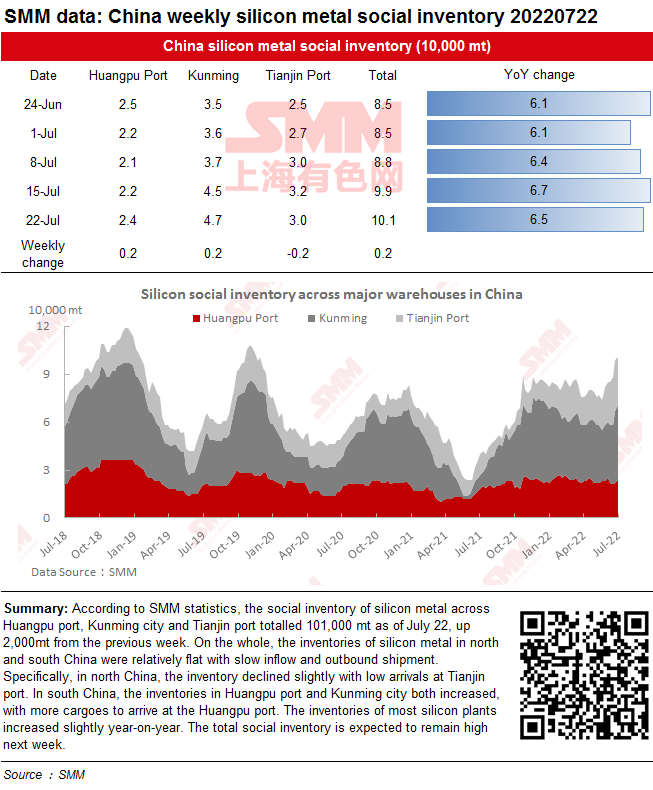 As of July 22, port inventories of nickel ore in China increased by 375,000 wmt to 5.585 million wmt compared with last week. The total Ni content stood at 43,900 wmt. The port inventory of nickel ore across seven major Chinese ports stood at 2.744 million wmt, 197,000 wmt higher than last week. The nickel ore inventory is increasing slowly. On one hand, the import volume was less than that of the same period last year. On the other hand, due to the weather conditions earlier and the recent drop in ore profits squeezed by the falling NPI prices, the shipments of nickel ore were low in the peak season.  Profits of some low-grade ores have reached near the break-even point, dragging down the mines’ shipment enthusiasm. In addition, the domestic NPI plants with thin profits intended to lower the purchase prices. If the current supply and demand are maintained, the import volume during the year will be far less than expected. 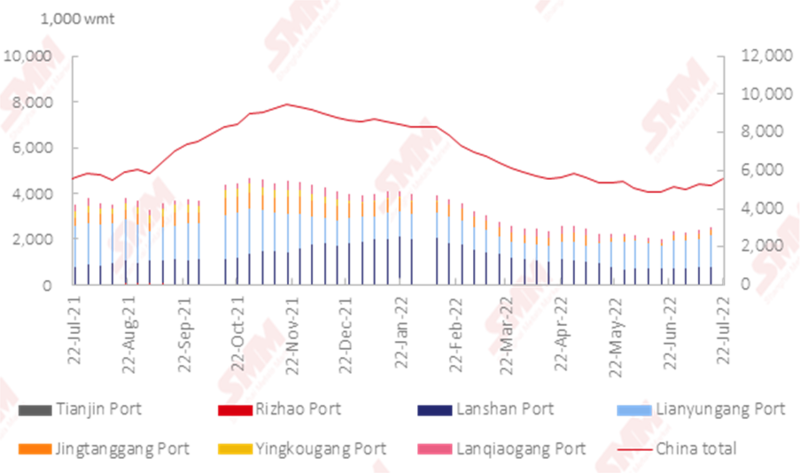