CST
Source:SMM
This is a roundup of China's metals weekly inventory as of June 10.

SHANGHAI, Jun 10 (SMM) - This is a roundup of China's metals weekly inventory as of June 10.

Aluminium ingot: SMM aluminium ingot social inventory stood at 853,000 mt as of June 9, down 29,000 mt from last Thursday June 2 and down 70,000 mt from the end of May, according to SMM statistics. In details, the inventory dropped the most in Wuxi and Shanghai. Wuxi saw a weekly drop of nearly 30,000 mt, down 60,000 mt from end-May to 348,000 mt mainly due to busy shipment from warehouses with worries aroused by the incident of multiple pledges of some aluminium ingot stocks in a warehouse. The inventory in Gongyi rose slightly to 80,000 mt amid rising arrivals and cautious purchases on high prices. On the whole, the incident has led to different dynamics of social inventory in various regions. It is expected that the inventory will slow down its decline with the arrivals of delayed goods after the transportation situation improves.

Aluminium billet: The inventory rose 12,900 mt from last Thursday as of June 9. The arrivals were high amid centralised shipment of upstream manufacturers during the Dragon Boat Festival, while the downstream still purchased on rigid demand, which was less than the pre-holiday level. Some extruders with re-melting furnace purchased aluminium ingot to control the cost in light of falling aluminium prices. The shipment from the warehouses fell 15,100 mt on a weekly basis to 52,300 mt, which is still in a reasonable range. It is expected that the conversion margins will remain low, while the consumption will pick up MoM in June, potentially pulling down billet inventory.

Looking forward, approaching the delivery of the 2206 copper contract, smelters will increase their shipments, but the downstream consumption cannot improve. Therefore, the inventory will still increase next week.

Copper inventories in domestic bonded zones decreased by 7,400 mt from last Thursday June 2 to 287,400 mt as of June 10, according to SMM survey. The inventory in Shanghai bonded zone decreased by 7,500 mt to 257,800 mt, while that in Guangdong added 100 mt to 29,600 mt. The price ratio was favourable for imports this week, and some warrants were declared and imported into China, resulting in a further decline in the bonded zone inventory. In addition, the efficiency of pick-up at bonded warehouses continued to improve. The market should pay attention to the flowing of cancelled warrants of LME Asia warehouses into China, which may end the decline in bonded zone inventory.

Overall, the inventory in the seven markets continued to decrease.

In Shanghai, the market were reluctant to restock cargoes. Traders and downstream companies mostly remained wait-and-see with poor transactions. At the same time, inventories were transferred to other warehouses in Shanghai, and the market inventory increased slightly. In Tianjin, the market arrivals decreased slightly, while the downstream was restrained by high zinc prices. Enterprises mainly consumed raw material inventories and were less active in purchasing. But the purchases on rigid demand still led to a small reduction in the inventory of Tianjin market. In Guangdong area, some stockholders were active in selling off goods affected by the repeated pledge of goods, and the downstream sector restocked on rigid demand occasionally. But the inventory reduced slightly amid sluggish orders.

Inventories in Shanghai, Guangdong and Tianjin fell by 1,400 mt, and inventories across seven markets decreased by 3,100 mt. 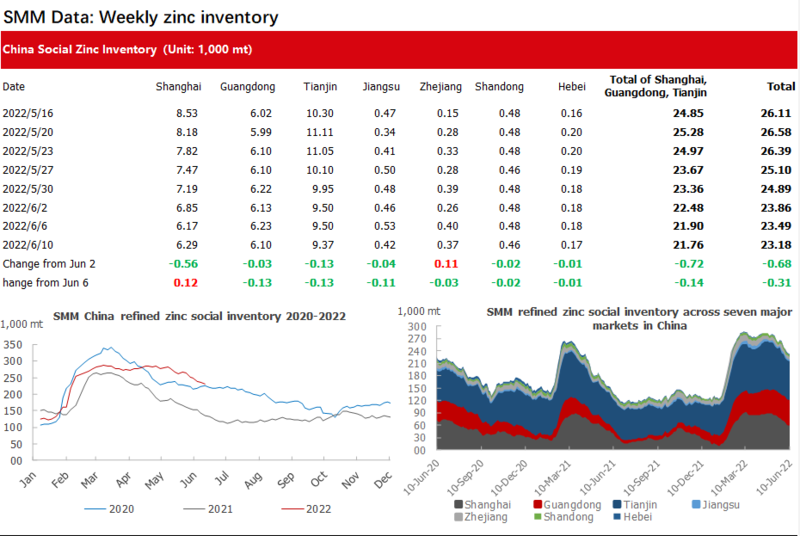 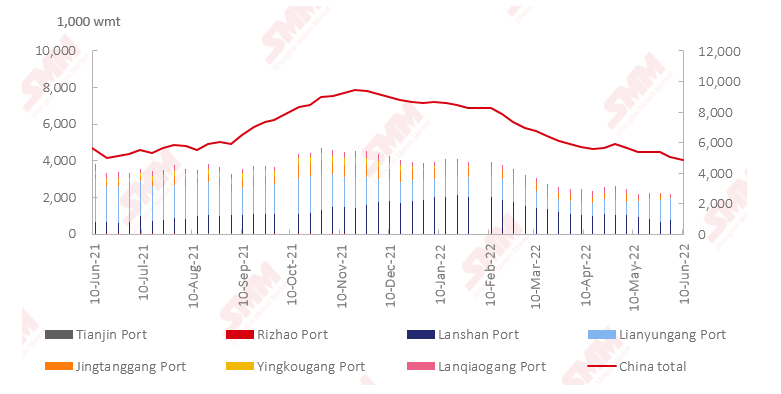 All
MOST POPULAR
1.China Weekly Inventory Summary and Data Wrap (Jun 17)
2.China Weekly Inventory Summary and Data Wrap (Jun 24)
3.SMM Review of Manganese Industry Chain in May
4.Cargo Holders were Unwilling to Sell and Raised the Prices, Silicon Metal Prices Rose Significantly
5.Silicon Market Became Quieter amid Cautious Purchases
Shanghai Metals Market
Privacy PolicyCompliance CentreSMM Credit ServiceContact UsAbout UsTerms & ConditionsSitemap
Notice: By accessing this site you agree that you will not copy or reproduce any part of its contents (including, but not limited to, single prices, graphs or news content) in any form or for any purpose whatsoever without the prior written consent of the publisher.