CST
Source:SMM
This is a roundup of China's metals weekly inventory as of May 27.

SHANGHAI, May 27 (SMM) - This is a roundup of China's metals weekly inventory as of May 27.

Aluminium ingot inventory: The aluminium ingot social inventories across China’s eight major markets totalled 936,000 mt as of May 26, down 29,000 mt from a week ago and 50,000 mt from the end of April. The overall decline was led by Wuxi, where arrivals dropped and will remain limited. The inventories in Gongyi fell at a slower pace amid purchases based on rigid demand, while those in Nanhai rose slightly as more shipments arrived. Given the tight transportation capacity, the total arrivals are unlikely to increase significantly in the future.

Aluminium billet inventory: The inventories of aluminium billets in China’s major markets dropped by 6,300 mt on a weekly basis as of May 26, with Foshan, Nanchang and Changzhou contributing to most of the decline Downstream producers in Changzhou and Nanchang restocked as needed. Arrivals in Foshan remained high, while consumption was relatively poor. SMM will keep a close eye on the recovery of consumption and whether the destocking trend will be extended amid the current high aluminium prices.

Looking forward, it is expected that the arrival of imported copper will increase next week, and the domestic supply will also rise, but the consumption may decrease due to the end of the month. SMM expects that the weekly inventory next week will increase slightly, while it dropped compared with the same period last year. The market shall pay attention to whether the downstream enterprises will restock actively during the Dragon Boat Festival.

Inventories across seven major markets in China decreased 12,900 mt from May 23

Total zinc ingots inventories across seven major markets in China stood at 251,000 mt as of Friday May 27, down 12,900 mt from May 23, down 14,800 mt from May 20. Inventory of zinc continued to decrease sharply this week. In Shanghai, after the pandemic prevention and control measures loosened, pace of downstream delivery-taking remained stable. Market inventory continued to reduce amid tight arrivals. In Tianjin, the pandemic prevention measures loosened in Dongli where delivery-taking was limited before. Therefore, the downstream orders which were made before offered pricing and delivered cargoes this week, leading to reduction in inventory. On the other hand, some of the early arbitrage traders still tended to export. Stocks were shipped for exports this week, driving down the inventory in Tianjin. In Guangdong, the downstream consumption was weak and the shipping cargoes did not increase. With stable arrivals, inventory in Guangdong remained flat this week. Inventories in Shanghai, Guangdong and Tianjin dropped 13,000 mt and inventories across seven major markets decreased 12,900 mt. 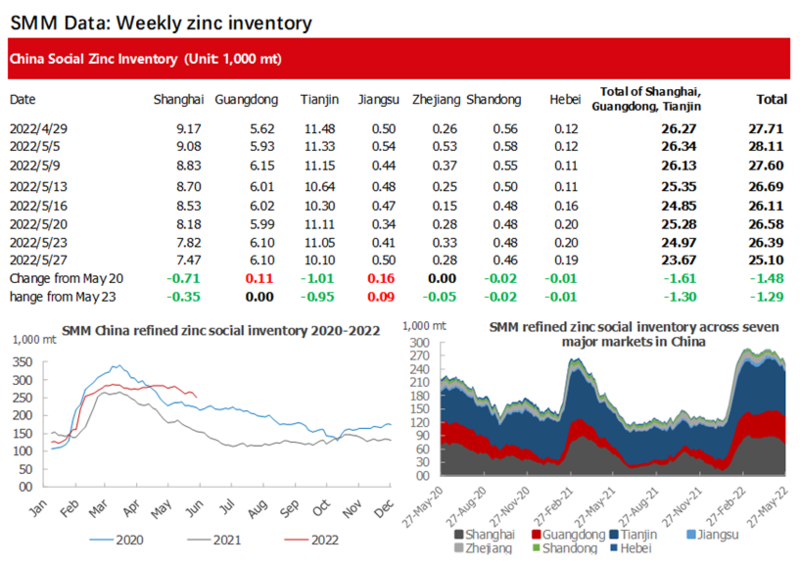 Nickel Ore Inventories at Chinese Ports up 37,000 wmt on Week

On May 27, the inventory of nickel ore across Chinese ports increased by 37,000 wmt to 5.4 million wmt compared with last week. The total Ni content increased by 300 mt to 42,400 mt. The total inventory at seven major ports across China stood at 2.258 million wmt, 27,000 wmt higher than the previous week. The port inventory of nickel ore stopped falling and increased slightly, but it was still at a historically low level. On the supply side, when the poor weather conditions in the Philippines in April and May ended, shipment from mines and goods transportation returned to normal, so the supply of nickel ore increased. On the demand side, due to the dropping NPI prices, NPI plants could get some profits to maintain their normal production and demand for raw materials.Besides, the previous nickel ore supply could not meet the demand due to the prolonged rainy season in the Philippines, hence some goods produced in June will be delivered according to the previous orders. The increase in nickel ore inventory will be limited in the future market.  In the short term, the port inventory of nickel ore will keep increasing slightly, and the market shall pay attention to the shipment from the Philippines and the domestic NPI plants’ demand for raw materials. 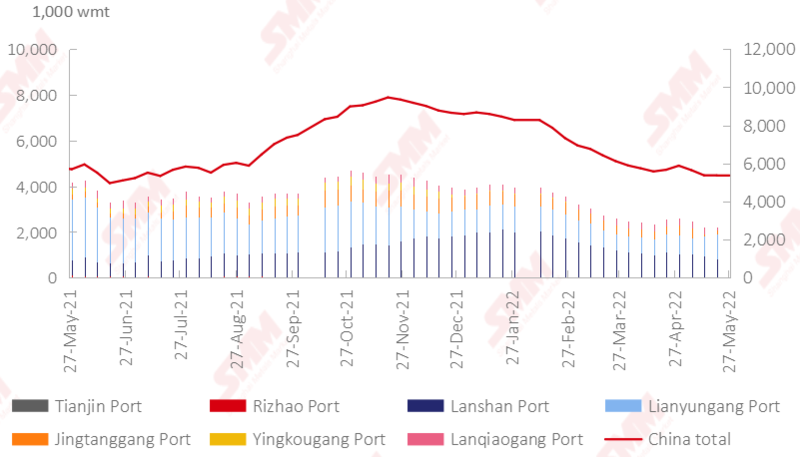 The spot imports of pure nickel remained profitable this week. The dropping of pure nickel premiums significantly increased the customs clearance. At present, traders bear huge pressure from the large spread between the front-month and next-month contracts, so the premiums are expected to be further lowered. Nickel inventory in Shanghai bonded zone totalled 7,900 mt this week, a decrease of 700 mt from last week. The inventory of nickel briquettes and nickel plates was 2,900 mt and 5,000 mt respectively.