On the evening of April 15, Oak shares (300082) released its 2021 results KuaiBao. The company realized operating income of about 6.717 billion yuan in 2021, an increase of 17.67 percent over the same period last year. Net profit belonging to shareholders of listed companies was about 357 million yuan, down 11.3 percent from the same period last year; basic earnings per share was 0.53 yuan, down 10.17 percent year-on-year. 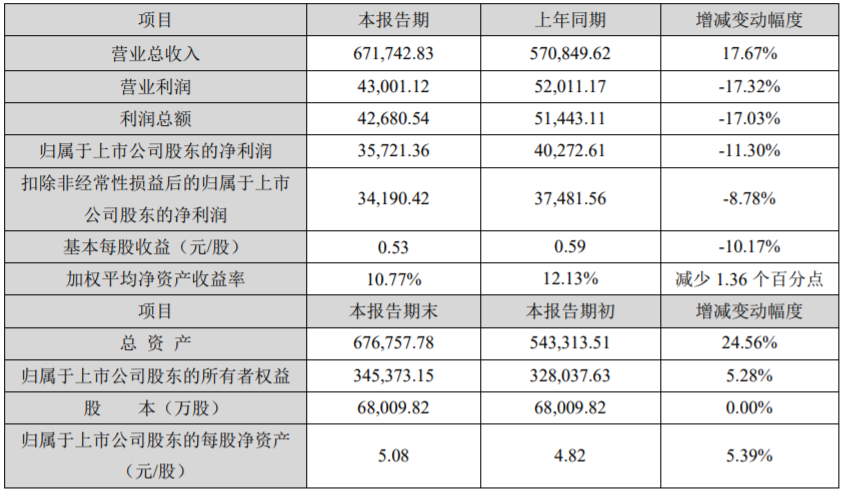 KuaiBao showed that the decline in performance in 2021 was mainly due to a decline in international crude oil inventories and concerns in the market that tight supply contributed to an across-the-board rise in crude oil prices, with the purchase cost of ethylene, the company's main raw material, up about 32 per cent from a year earlier. At the same time, Jiangsu Oke Chemical Co., Ltd., a wholly owned subsidiary of the company, carried out capacity expansion and overhaul of the production plant from March 6 to April 26, 2021, and the production capacity was reduced due to the epidemic situation and energy consumption control, resulting in an increase in corresponding costs.

On the same day, Oak released a forecast of first-quarter results. The company expects a profit of 95 million yuan to 105 million yuan in the first quarter of 2022, an increase of 85.84% Mel 105.40% over the same period last year.

Oak said that the development trend of the new energy vehicle industry continues to improve. In recent years, as the state pays more and more attention to environmental protection to drive the gradual expansion of the market scale of new energy vehicles, the production and sales of new energy vehicles are increasing. Promote the strong market demand for lithium-ion battery electrolyte. In the first quarter, the company's gross margin of electrolyte solvents for lithium batteries was about 65 million yuan, an increase of about 47.5% over the same period last year.

Battery Network noted that in September 2020, Oke shares acquired a 35% stake in Suzhou Huayi in the form of equity transfer and capital increase, so as to create an "ethylene-EO-EC/DMC-CEC-VC/FEC" industrial chain and enhance the competitiveness of the overall industrial chain. In December 2021, Oak announced that Suzhou Huayi completed strategic financing, Sinochem Capital's Sinochem High-tech Industry Fund under Sinochem Capital Venture Capital and Jiangsu Yida Capital as joint leaders in this round. The follow-up parties will integrate resources in the field of new energy lithium battery electrolyte materials, give full play to their respective advantages and carry out in-depth cooperation. At the same time, this financing will help Suzhou Huayi to promote the construction of new projects, increase product capacity, enrich the range of products, and further consolidate the company's position in the electrolyte additive industry.

China’s installed power battery capacity rallied 30% in April
China's installed capacity of batteries to power electric vehicles climbed 29.5% from a month ago to 3.6GWh in April, following a surge of 363.2% in the month of March, showed data from the China Automobile Power Battery Industry Innovation Alliance, suggesting the country’s EV sector continues to recover from the fallout caused by the coronavirus pandemic.

MOST POPULAR
1.Average Price of Spodumene Concentrates Broke Through $5,000/mt, and Battery-grade Lithium Carbonate Prices Gained another 1,500 yuan/mt
2.Sales of NEVs Totalled at 896,000 Units Worldwide in June, and BYD Ranked First in the First Half
3.Lithium Carbonate Prices Jumped by 1,000 yuan/mt in A Single Day, Lithium Hexafluorophosphate Prices Rose for Five Consecutive Days
4.China's Output of Lithium Carbonate and Lithium Hydroxide Both Surged in the First Half of 2022
5.Cobalt Sulphate Prices Plummeted within 4 Months, and Will the Ternary Battery Market Usher in a Turning Point?
Shanghai Metals Market
Privacy PolicyCompliance CentreSMM Credit ServiceContact UsAbout UsTerms & ConditionsSitemap
Notice: By accessing this site you agree that you will not copy or reproduce any part of its contents (including, but not limited to, single prices, graphs or news content) in any form or for any purpose whatsoever without the prior written consent of the publisher.