CST
Source:SMM
This is a roundup of China's metals weekly inventory as of March 11.

SHANGHAI, Mar 11 (SMM) - This is a roundup of China's metals weekly inventory as of March 11.

The domestic aluminium ingot social inventory totalled 1.14 million mt as of March 10, up 22,000 mt from a week ago. Wuxi (+16,000 mt) and Nanhai (+8,000 mt) were the major contributors to the overall increase. The inventory was flat in Hangzhou, Tianjin, and Linyi, but fell slightly in Gongyi and Shanghai. Spot discounts narrowed amid falling SHFE aluminium prices. Smelters and traders were in a rush to sell amid growing bearishness towards aluminium prices. However, downstream buyers stayed out of the market, awaiting even lower prices. SMM expects that the social inventory will begin to decline next week. Some leading aluminium extruders have begun to resume work, which coupled with the corrections in aluminium prices, may accelerate the decline in aluminium billet inventory. 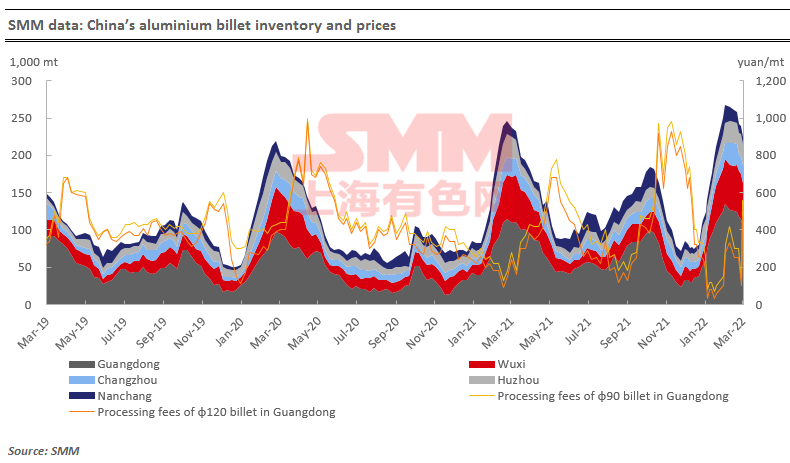 As of Friday March 11, SMM copper inventory across major Chinese markets decreased 11,400 mt from Monday to 216,000 mt, up 117,300 mt from the pre-CNY holiday level of 98,700 mt. From the date of Chinese New Year (CNY) until the 33th calendar day post the CNY holiday, the increment of inventory was 4,400 mt less than the same period in 2021, when the inventory recorded an increase of 121,700 mt. The decline of weekly destocking and reduced increment of inventory was realised. It is highly probable that a turning point in domestic stock has already occurred. Compared with Monday's data, inventories across China increased only in Shanghai and decreased in most other regions.

In detail, the inventories in Shanghai increased 2,100 mt to 137,900 mt, the inventories in Guangdong decreased 11,200 mt to 55,000 mt, the inventory in Jiangsu fell 500 mt to 13,100 mt, the inventory in Chongqing dipped 800 mt to 3,200 mt, and the inventory in Tianjin dropped 700 mt to 1,800 mt. The increase in Shanghai inventories was due to a slight increase in the volume of customs clearance after the temporary opening of the import window. Besides, a sharp rise in copper prices at the beginning of the week increased the wait-and-see sentiment in downstream and slightly suppressed the purchasing. The smelters exported actively due to the opening of the export window, and shipments from some smelters sharply dropped because of the pandemic in Guangxi, resulting in the significant decline of Guangdong inventories. The decrease in inventories in Tianjin was also due to the decrease in shipments affected by the pandemic in northeast China. Besides, although the oil prices soared, the increase in the prices of transportation was limited, thus, the transportation efficiency across the country decreased obviously. The situation that downstream manufacturers are more willing to purchase factory-to-factory supplies will become more obvious after the oil prices rise again next week, which is also one of the reasons for the decrease in inventory.

Looking forward, with the recovery of consumption and the reduction of shipments from smelters, SMM expects the inventory will continue to decline next week, and the turning point of inventory will appear.

The inventory kept rising over the weekend. Among them, the inventory in Shanghai was stable amid arrivals of domestic products, while the inventories still accumulated due to the downstream production resumption had not been improved. The demand in Guangdong gradually increased and destocking slightly, while the downstream work resumption went on smoothly. The arrivals of domestic products in Tianjin were regular while the consumption picked up, hence the local inventory dropped.

As of March 11, the nickel ore inventory at Chinese ports dipped 180,000 wmt from a week earlier to 6.757 million wmt. Total Ni content stood at 53,100 mt. The total inventory at seven major ports stood at 3.06 million wmt, 170,000 wmt lower than last week. The rainy season in the main mining areas in the Philippines has not yet ended, and the import volume of nickel ore will remain low in the short term. Thus, the weekly inventory of nickel ore will maintain a downward trend. On the demand side, the mainstream NPI plants are inactive in restocking as they still have stocks. Small NPI plants have rigid restocking demand, and the traded prices are relatively high. SMM expects that the inventory at ports will decline. There are two reasons, firstly, the increased production in NPI plants urges them to purchase raw materials. Secondly, due to the rainy season, the import volume of nickel ore cannot quickly reach the peak. 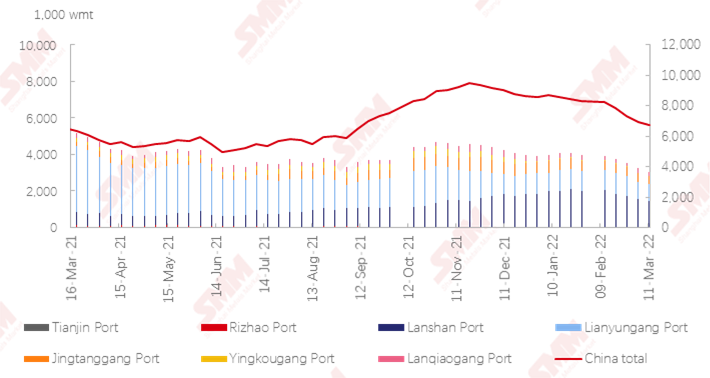 SHANGHAI, Mar 11(SMM)–Social inventories of lead ingots across five Chinese markets stood at 122,100 mt, up 15,400 mt from Mar 4 MoM and 12,900 mt from Mar 7, hitting a historical high within three months.
According to research, under the influence of Russia-Ukraine conflict and capital changes, SHFE lead rose sharply, during which SHFE 2204 lead surged to 16,465 yuan/mt (SHFE 2203 lead was as high as 16,360 yuan/mt), while the downstream enterprises tended to wait and see. Spots were generally shipped at a large discount. The absolute price had been within 15,500 yuan/mt, and the price spread between futures and spots exceeded 300 yuan/mt. Considering the price advantage, the stockholders had accelerated their delivery, and the social inventory of lead ingots increased by more than 10,000 yuan/mt. In addition, SHFE 2203 lead will be delivered next week, and the delivery sources will arrive at the stock one after another. The social inventory of lead ingots still has a rising trend.

According to SMM statistics, social inventories of silicon in three Chinese markets totalled 84,000 mt as of Mar 11, down 3,000 mt from the previous week. The inventory in the south had been shipped out during the week, led to an obvious decline in inventory. The northern Tianjin Port had more arrivals and inventory increased slightly. The overall social inventory showed a trend of destocking.

Copper inventories in the domestic bonded zones increased 3,500 mt from March 4 to 323,600 mt as of Friday March 11, according to the most recent SMM survey. Inventory in the Shanghai bonded zone increased 9,200 mt to 287,700 mt, and inventory in the Guangdong bonded zone fell 5,700 mt to 35,900 mt. The import losses this week were significantly narrower than that in last week. When the import window was opened in the night trading on Wednesday, some traders locked the price ratio and quickly declared the goods in bonded zones for import. Thus, the increase of inventory in Shanghai narrowed, and the inventory in Guangdong declined.

Nickel ore port stocks in decline
Nickel ore inventory at Chinese ports continued to drop this week, to 7.59 million wmt as of Friday February 2, according to SMM data.