The most dramatic acquisition case

Among market participants active deployment in the resources sector, there is nothing more dramatic and reversed than the battle for the acquisition of Millennium Lithium. The battle involved Ganfeng Lithium, one of the lithium giants, and CATL, the power battery giant whose share prices have set new record highs this year. The battle began with CATL’s interception of the deal and temporarily preserved the acquisition rights of Millennium Lithium. But then Millennium Lithium received a "better offer" from Lithium Americas that was higher than CATL' bid, and eventually Lithium Americas acquired all of Millennial's shares for a total consideration of approximately US$400 million. The “turf war” over Millennium Lithium, which lasted for nearly four months, finally came to an end.

According to official media statistics, the capitals involved has exceeded 40 billion yuan as companies scramble for lithium resources such as lithium mines and salt lakes! The chart below may offer a glimpse of the heated competition in the past year. 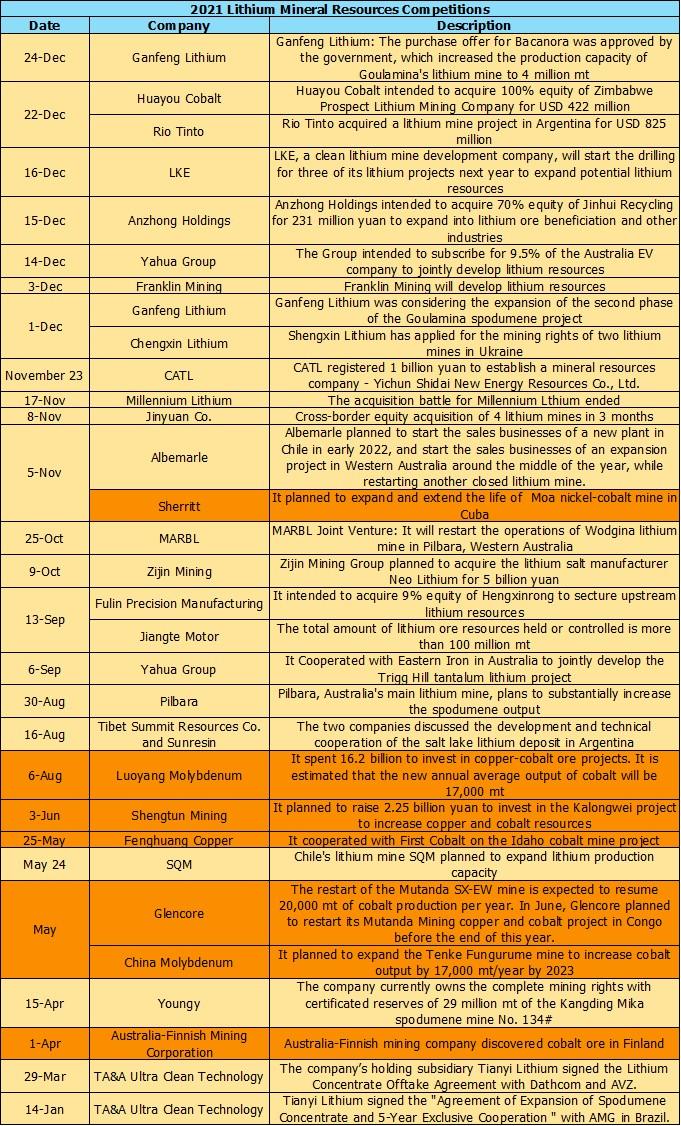 It is that domestic and foreign companies have been actively engaged in the acquiring of cobalt and lithium resources, mostly in the second half of this year. With this in mind, it is important to mention the "big event" that occurred twice in 2021 when Australia's major lithium mine, Pilbara, auctioned spodumene concentrate at an all-time high.

In mid-September, Pilbara opened its second public auction for spodumene concentrate, with the final prices at US$2,240/mt, well above the estimate of US$1,700-2,000/mt (CIF China).

The prices of lithium and cobalt kept hitting new highs

Lithium Carbonate Prices Soared near CNY
The average monthly price of battery-grade lithium carbonate was 236,478 yuan/mt in December 2021, up 20% on the month. The prices are likely to rise further as the downstream restocking extends.

Has the Third Round of Lithium Price Hike Started?
The market sentiment of lithium ore increased further. SQM, the world's second-largest lithium miner, predicted that the average price of lithium will rise by nearly 50% compared to Q3 in Q4.

Rising Lithium Products Prices in South America to Shore Up Global Lithium Prices
Most of the companies that extract lithium from salt lakes in South America sell lithium products mainly through long-term contract. And selling prices were low for orders executed in the first half of 2021, most of which were signed at the end of 2020, according to CITIC Securities.

All
MOST POPULAR
1.CATL Unveils CTP3.0 "Qilin" Battery, Which Holds 13% More Power than 4680 Battery
2.Natrium Energy Signed a Contract of 80,000 mt of Sodium-Ion Battery Cathode Material Project, Further Accelerating the Industrialisation
3.Lithium Carbonate Supply-Demand Balance Expected to Return to Deficit
4.Lithium Carbonate Prices Stabilised at 468,000 yuan/mt, Refined Cobalt Prices Plummeted 7,500 yuan/mt within A Week
5.Chile Planned to Promote Tax Reform by the End of June and Will the Global Copper and Lithium Supply See Significant Change?
Shanghai Metals Market
Privacy PolicyCompliance CentreSMM Credit ServiceContact UsAbout UsTerms & ConditionsSitemap
Notice: By accessing this site you agree that you will not copy or reproduce any part of its contents (including, but not limited to, single prices, graphs or news content) in any form or for any purpose whatsoever without the prior written consent of the publisher.