The inventories of HRC fell more significantly this week, mainly due to the sharp decline in supply. The HRC output dropped across the country. XY Steel in east China and PG rolling line in south-west China started maintenance, and the production in north China was unstable due to environmental protection and heating season in winter. On the demand side, the end users purchased cautiously on demand. The inventory dropped more slowly in Zhangjiagang and Shanghai. The demand was lower than the same period last year. The in-plant stocks stopped increasing and started to fall this week. The inventories increased in south and north China, where a large proportion of HRC products were stocks, but the increase slowed down significantly. The in-plant inventory in east China fell slightly. The HRC output fell sharply in north and south China, and some traders in south China lacked goods after the previous stocks were consumed. Some traders slightly increased purchase, and the in-plant inventory were transferred to the social warehouses more rapidly. 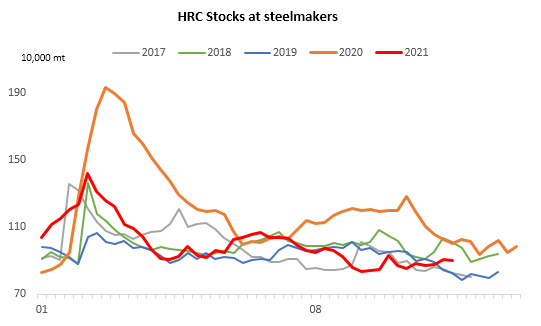 The apparent demand of HRC weakened significantly, and the transactions were muted on the week in many regions. The inventories will drop slowly if the supply does not increase significantly.

However, the output in major steel mills may rebound after the goals of output reduction of crude steel are achieved. If the demand doest not improve, the inventories may not decrease further.

China HRC inventories extended increase by 1.9% on week
SMM data showed that HRC stocks across social warehouses and steelmakers increased 1.87% in the week ended July 9 to 3.63 million mt, after a 1.89% gain in the previous week. The stocks were 8.5% higher than the same period last year.

HRC inventories extend decline as production curbs, maintenance continue
Stocks decreased by 6.9% from a week ago to 3.07 million mt as of Oct 24

MOST POPULAR
1.Stainless Steel Prices Remained Weak despite Narrow Rebound amid Oversupply of Ferrochrome and Indonesia NPI
2.Iron Ore Prices Rose for Seven Consecutive Days amid the Game between Fundamentals and Expectations
3.Baosteel Desheng Will Cancel High-Carbon Ferrochrome Purchases under Long-Term Orders and Spot Purchases in August as It Slashes Output against Bleak Stainless Steel Market
4.China HRC Stocks Down 61,700 mt on Week
5.Iron Ore Prices to Remain Volatile in the Short Term, with Eyes on Demand
Shanghai Metals Market
Privacy PolicyCompliance CentreSMM Credit ServiceContact UsAbout UsTerms & ConditionsSitemap
Notice: By accessing this site you agree that you will not copy or reproduce any part of its contents (including, but not limited to, single prices, graphs or news content) in any form or for any purpose whatsoever without the prior written consent of the publisher.