Magnesium prices rose drastically in September in a short period of time owing to production cuts in major producing areas, creating great difficulties in delivering and taking orders among overseas traders. But the supply soon picked up as the manufacturers resumed production in the following month, hence easing market panics. And the downstream consumers with orders on hand decided to make purchases, which served as the major reason for recovering export in October.

The magnesium ingot exports are expected to maintain rapid growth in November amid correcting magnesium prices and the seasonal high of foreign trade in Q4. 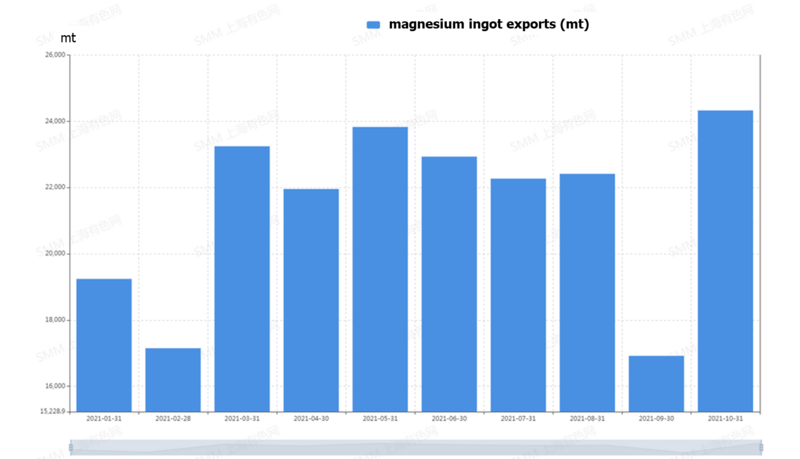 Magnesium Prices Were Weak amid Sluggish Transactions 【SMM post-holiday review】
It is understood from the factories in the main magnesium ingot production area that the majority of the large factories have basically resumed production, except for some factories that have not yet fulfilled the requirement due to their own environmental protection reasons.

Exclusive: China's base metals output in February
An SMM survey showed that China produced 821,800 mt of copper cathode in February, rising 2.89% from January and 20.31% from a year ago, as some copper smelters recovered from maintenance.

Demand recovery, production costs to limit downsides in magnesium ingot prices
Prices of magnesium ingot edged lower last week as more than half of downstream producers remained shut on some existing curbs for operation resumption. But the downside room in prices will be capped

MOST POPULAR
1.Exclusive: China's Metals Output in December
2.China Weekly Inventory Summary and Data Wrap (Jan 7)
3.China Weekly Inventory Summary and Data Wrap (Jan 14)
4.Silicon Metal Prices Dropped amid Weak Supply and Demand
5.Will the Rainstorm in Brazil Shore up Manganese Ore Prices?
Shanghai Metals Market
Privacy PolicyCompliance CentreSMM Credit ServiceContact UsAbout UsTerms & ConditionsSitemap
Notice: By accessing this site you agree that you will not copy or reproduce any part of its contents (including, but not limited to, single prices, graphs or news content) in any form or for any purpose whatsoever without the prior written consent of the publisher.