SHANGHAI, Nov 18 (SMM) – The decline in the total HRC inventory and social inventory narrowed this week, while in-plants inventory continued to accumulate.  On the supply side, the production of HRC in east China has declined this week. However, due to the small increase in production by mainstream steel mills in north-east China and the unstable production plan in north China amid environmental restrictions in autumn and winter, the output in the north has increased slightly. In south China, the production pace of mainstream steel mills has accelerated, and output has continued to increase. The overall output of HRC has increased slightly this week. On the demand side, spot prices fluctuated greatly this week, and there was panic in the market. Some regions rushed to lower prices and sell goods. Trades in east China, especially in Zhangjiagang, were brisk, while those in north and south China were relatively weak.
Inventories across social warehouses decreased 39,900 mt or 1.66% to 2.365 million mt. This was 2.28% lower than the same period last year. This week, the decline in social stocks narrowed slightly. East China saw the largest decline. Among them, Zhangjiagang, Ningbo, Wuxi and other places contributed a lot of inventory decline. South China and central China were affected by weaker demand this week, and the inventory only declined slightly. However, the inventory in the north-west and south-west have accumulated marginally. The decline of social stocks has narrowed.

Stocks at Chinese steel makers came in at 906,100 mt, up 28,800 mt or 3.28% from a week earlier but down 11.86% on the year. This week, the in-plant inventory increased slightly. Except for east China, there was a backlog of inventory in northern and southern regions. Affected by factors such as the recent sharp drop in hot-rolled spot prices, which resulted in losses for traders and the bearish market sentiment, the willingness of traders to restock goods has declined, leading to accumulation of inventory at mills.

The apparent consumption of HRC has declined this week, which is related to the weaker transactions in Shanghai and north China compared with last week. At present, the supply and demand remain weak. Without significant increase in hot-rolling supply in the short term, inventory will continue to decline. However, as the crude steel output reduction targets are successively completed, the output of domestic mainstream HRC steel mills may rebound, which may hamper the inventory decline by then. 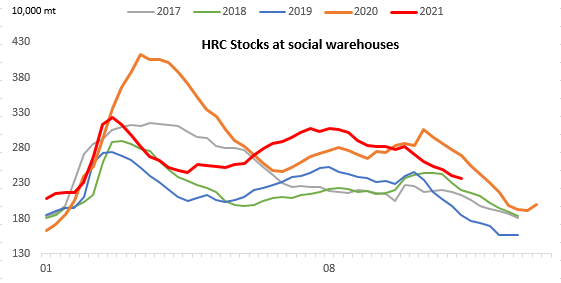 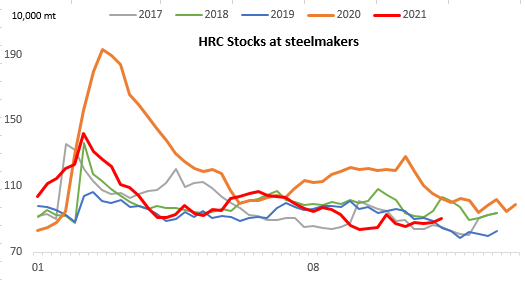 One Steel Mill in Guangxi to Cut Hot-Rolled Coil Output by 30% amid Dual Energy Consumption Control
Affected by the dual control of energy consumption and the power rationing policy, a steel mill in Guangxi will reduce its hot rolled coil output by about 30% in October, and the same proportion of customer orders for the month will be adjusted.

All
MOST POPULAR
1.Iron Ore Prices Will Encounter Pressures from Weakening Demand
2.HRC Prices Will Be Strongly Supported by the Infrastructure Construction
3.Rebar Prices Will Gain Strong Support from the Demand Side Post the CNY
4.Coke Prices Likely to Drop amid Weakening Demand
5.China HRC Inventory Rose 49,000 mt on Week
Shanghai Metals Market
Privacy PolicyCompliance CentreSMM Credit ServiceContact UsAbout UsTerms & ConditionsSitemap
Notice: By accessing this site you agree that you will not copy or reproduce any part of its contents (including, but not limited to, single prices, graphs or news content) in any form or for any purpose whatsoever without the prior written consent of the publisher.