The HRC supply was basically stable this week as it was less affected by the production curtailment. The power rationing also suppressed downstream demand. Hence the overall HRC inventory is hard to drop amid the weakened supply and demand.

The social inventory of HRC increased slightly this week, mainly due to severe power rationing in several important HRC markets in south and east China. The demand of downstream tube mills and processing plants was significantly suppressed, and the market transactions were stagnated. The total HRC output declined slightly this week. The output dropped in east and north China, but increased in south China. The total in-plant inventory of HRC increased slightly, with the increment in south China most significant. The HRC inventory is expected to fluctuate at a lower level. 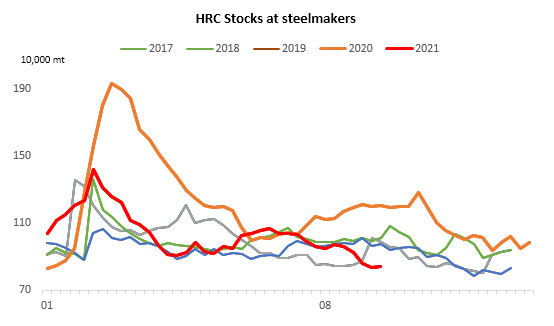 The total HRC inventory rebounded. The overall supply stood stable as the output in south China increased, while the output in east and north China declined. At the sametime, the strengthened power rationing in some regions suppressed the HRC demand, and the decline in the inventory was stagnated. The HRC demand recovery is slower than expected, and the prices lack upward momentum, so the prices fluctuated widely. The price increase is expected to be limited amid the flat demand in the short term.

HRC, plates output to rise 4.75% in December as mills recover from maintenance
Chinese steelmakers plan to produce 9.29 million mt of hot-rolled coils and plates in December

HRC inventories extended decline, but steelmakers recovered from maintenance
Stocks decreased by 2.6% from a week ago to 2.99 million mt as of Oct 31

HRC social inventories decline 2% on week
Social stocks fell 2% from a week earlier to stand at 2.32 million mt as of Sep 12