Trades were subdued initially before improvement last week. Yangshan copper premiums continued its upward trend. The import price ratio weakened in the first half of the week, muting trades. Premiums dipped slightly even as sellers raised their quotes. The SHFE/LME copper price ratio improved in the second half of the week, narrowing import losses over the August contract to less than 300 yuan/mt. This, together with high premiums in the domestic spot market, boosted market demand. Traders continued to raise quotes.

As of the end of the week, quotations for domestic pyro-copper under warrants stood at $55-60/mt at the end of the week, and traded import premiums stood at around $52/mt. Traded import premiums under B/L currently stand at around $45/mt for the two high-quality brands slated to arrive in late August. Import premiums for warrants are currently quoted at $40-58/mt, up $6/mt from a week earlier on average, and quotes for B/L stand at $30-45/mt, a rise of $5.5/mt. Import premiums will have upward room. Low domestic inventory has kept spot quotes firm, and import profits incentivised customs clearances. Trading has been brisk while sellers have held onto their cargoes. 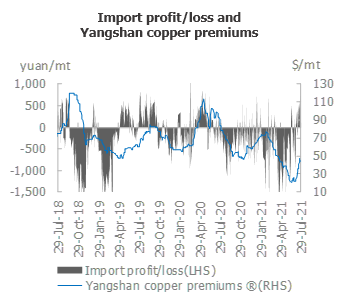 Copper inventories in the Shanghai bonded zone decreased 19,000 mt from July 23 to 409,600 mt as of July 30, the third consecutive week of decline. The inventory decline exceeded the prior week. Domestic consumption was brisk, and social inventories continued to decline. High premiums in the domestic spot market encouraged import. Orders that were signed two weeks ago amid import profits under warrants implemented customs clearance last week, driving further declines in bonded zone inventories. 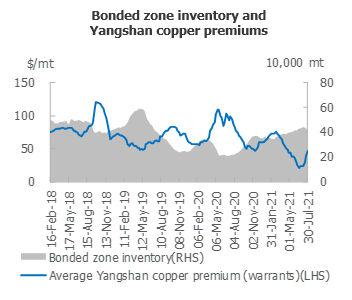 Yangshan Copper Premiums Took a Downturn amid Falling SHFE/LME Copper Price Ratio
The Yangshan copper premiums stood between $110-140/mt under warrants last week, and $90-130/mt under bill of lading (B/L), with the quotation period in November. The SHFE/LME copper price ratio stood at 7.34 as of October 15.

The Profits of Industrial Enterprises in Shenzhen Fell 8% YoY in Jan-Aug amid surging Raw Materials Prices and Ocean Freight
From January to August this year, the cumulative profits of industrial enterprises in Shenzhen accounted for about 26% of Guangdong, down 8.0% compared to the same period last year, which is the only city in the province with negative growth.

NBS: Corporate Costs Rose on High Commodity Prices and Chip Shortages
The profits of industrial enterprises above designated size continued to grow in August, despite the spread of the pandemic and floods, said Zhu Hong, a senior statistician from the Industry Department of the National Bureau of Statistics.

Yangshan Copper Premiums Continued to Rise
Yangshan copper premiums with a quotation period in September stood at $42-67/mt under warrants during August 2-6, and between $35-64/mt under bill of lading (B/L). The SHFE/LME copper price ratio stood at 7.34 as of August 6.