SMM July 22nd: at the online live conference hosted by SMM, Zhu Jian, a new energy analyst and strategic consultant from SMM, delivered a keynote speech on "reclaiming the Blue Sea of Lithium electricity". He believes that under the strong development of new energy vehicles, lithium recycling can be expected in the future, while the current lithium recycling is beset with difficulties, policy guidance and market-oriented improvement is imminent.

First, new energy vehicles are unstoppable, and lithium battery recycling is expected in the future.

The global market for new energy vehicles continues to heat up, and the growth rate of up to 25% will continue in the next decade. 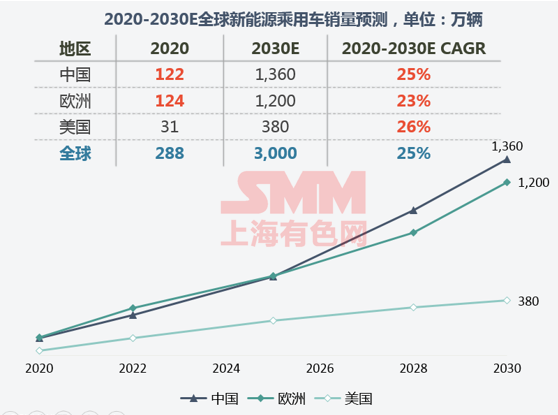 In terms of sub-regional markets, China, Europe and the United States will be the three main driving markets. China, such as the typical policy + market-driven, is shifting from policy-oriented to market-oriented. In Europe, the overall development trend is similar to that of early China, which is a strict carbon emission system with financial subsidies and tax breaks. The United States, on the other hand, is a different trend from China and Europe, and is more scientific and technological innovation led by Tesla to drive consumer preferences and trends.

New energy is about to enter the blue sea of battery recycling, and it will break out in an all-round way after 2025, and the amount of waste batteries will reach 1.2TWh.

From the point of view of the type of battery recycling, it is not difficult to find that in the past five years, lithium cobalt batteries accounted for 24%, which will drop to 3% in the period 2026-2030. At the same time, the proportion of iron lithium and ternary batteries will increase significantly with the development of the power car market, accounting for 97%.

The amount of battery scrapped in 26-30 years will reach 1.2 TWH, and the metal recycling of nickel and lithium will continue to grow by more than 30%.

Enterprises in the upper and lower reaches of the industrial chain are actively seizing the battery recycling market.

Upstream mining companies such as Ganfeng Lithium Industry said that they will vigorously develop recycling economy such as lithium battery recycling, and Ganfeng will strive to achieve 200000 tons of lithium salt recovery capacity by 2030. Honeycomb Energy and Huayou Cobalt Industry will make use of their respective advantages to cooperate in lithium power new energy battery recycling and reducing carbon emissions.

Grimmy and BAIC will cooperate in the fields of recycling system, echelon utilization of decommissioned batteries, recycling of waste batteries and so on. In addition, SAIC, Bang Pu and Ningde era, as well as Tesla, are also laying out the battery recycling market one after another, with a view to binding ahead of time.

According to statistics, the number of enterprises related to lithium battery recycling has increased rapidly from 2015 to 2020. at present, there are 15000 enterprises related to "power battery recycling" in China. 2020 is the peak of registration, with 2579 new registrations for the whole year, an increase of 253.3% over the same period last year. 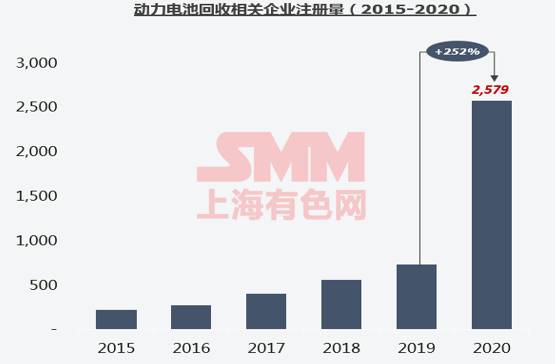 Second, the whitelist leads to the standardization of the industry, and the scattered market is in urgent need of regulation.

In order to strengthen the utilization of waste batteries of new energy vehicles, the Ministry of Industry and Information Technology issued a whitelist policy.

By 2020, 27 companies had been whitelisted. Whitelist policy is currently through the formulation and recommendation of industry standards, with a view to compliance with battery recycling enterprises to promote the development of market standardization. 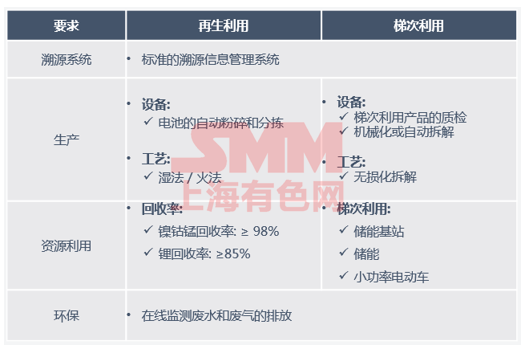 Although Guangdong and Henan are concentrated areas of waste, social recycling will spread all over the country in the future.

According to SMM research, Guangdong is currently the concentration of digital battery enterprises in China, with more than 50 large-scale power and digital battery enterprises, while Henan is a gathering place of waste battery traders, with more than 1000 traders and waste dismantling enterprises. East and South China, as major consumers of new energy vehicles, will also be the main producers of scrapped batteries in the future. So on the whole, social recycling will spread all over the country in the future.

Most of the scrapped batteries are waste between production, and the market flow is complex, so it is urgent to regulate the battery.

In terms of proportion, new waste between production still accounts for a large proportion, reaching about 60%, while social recovery accounts for only 40%, mainly because the current recovery system is still imperfect, recovery is difficult, and there are too many intermediate links.

From the point of view of the flow direction, new energy car owners mainly sell scrapped cars to post-sale outlets, while recycling companies, such as Grimme, have signed long-term cooperation agreements with car companies to recycle scrapped batteries from 4S stores.

On the whole, BtoB car companies and mainframe factories (the new waste of the test line) for recycling enterprises, power batteries have not reached the explosive period, recycling is difficult: car companies' responsibility system is not perfect, promotion is less, and consumers' awareness of environmental protection is insufficient. In addition, many irregular traders recover from high prices, disturbing the market. Therefore, effective regulation absolutely Brooks no delay.

There are a large number of unqualified recycling enterprises, and it is urgent for the state and whitelist enterprises to lead the standardized development of the industry.

At present, there are more than 1000 unqualified non-whitelist recycling enterprises on the market, most of which are "family workshops". Unqualified enterprises dispose of waste batteries by recycling at high prices and violently dismantling them, disrupting the market and polluting the environment. Therefore, there is an urgent need for the state and whitelist enterprises to lead the development of the industry.

Third, break through the bottleneck of recycling marketization and seize the dividend of lithium battery recovery.

The recovery of lithium batteries is beset with difficulties, and it is urgent to improve policy guidance and marketization.

Generally speaking, SMM believes that the recycling market is mainly faced with four major problems: first, macro policy supervision needs to be strengthened, but the "main body of responsibility" is not the "main body of contribution"; third, standardized valuation is beset with difficulties, and fourth, whitelist enterprises make very little profit.

The whitelist is a "recommended" cooperative enterprise for power battery recycling, which is not a compulsory threshold for market entry. A large number of "family workshops" with "no battery recycling qualification" or even "no business license" recycle waste batteries at high prices and violently dismantle them, disrupting the healthy development of the market and causing serious environmental pollution.

2. "the subject of responsibility" is not the "subject of contribution".

The main body of responsibility for power battery recycling is the automobile enterprise. at present, the number of battery recycling outlets announced by car enterprise officials is nearly 10,000, but most of them are a mere formality and the utilization rate of the network is very low, relying only on automobile enterprises to recover batteries from retail investors in the market, which is uncontrollable and uneconomical in a short period of time, while the actual participants in the recycling market are traders, but there is no mature system.

3. Standardized pricing is beset with difficulties.

Due to the differences in battery models, specifications, brands and residual power, it is difficult for recycling enterprises to unify the pricing standards of waste batteries, and most of the whitelist enterprises use the valuable metal content in batteries (such as nickel, cobalt and manganese) as the pricing basis of waste batteries. however, it often encounters the dilemma of inaccurate metal content detection and uneven sampling.

In addition, the transparency of battery pricing requires recycling companies to clarify the "communication protocols and data" of batteries, but these core information is only in the hands of car companies and will not be easily released to the public, which brings greater obstacles to the standardization of waste battery pricing.

In addition, in terms of the current amount of battery recycling, it is difficult for whitelist enterprises to achieve large-scale economic benefits, and the battery recycling business can only be used as the support and supplement of the company's overall business in the short term.

In the short and medium term, recyclers will work with car companies and battery companies to build recycling channels to recover raw materials for self-use and export; in the long run, third-party service providers will build a C2B2B system

SMM and Li Huitong will provide more practical quotation services for users in the industry based on real-time transaction data.

Yunnan's production capacity released slowly in June, increment in industrial silicon output lower than expectation
SMM data showed that China's silicon metal output stood at 230,000 mt in June, up 41,000 mt or 21.7% from the previous month. The output generally increased across all regions except for Xinjiang. The output totalled 1.25 million mt from January to June 2021, an increase of 38.1% on the year.

CST
Special Issues
Rebar in-plant inventory sees smaller decline from a week ago
Overall rebar inventories in China dropped 6.1% from a week ago as of Thursday May 10, marking the eight consecutive weeks of decline, SMM data showed.