CST
Source:SMM
Recently, Tesla has officially released Standard Range Model Y, whose price has fallen to 276,000 yuan. The latest Model Y is different from the previous two Model Y models mainly in motive power and battery system as it has cancelled the front induction asynchronous motor and is driven only by the rear wheels.

SHANGHAI, Jul 20 (SMM) — Recently, Tesla has officially released Standard Range Model Y, whose price has fallen to 276,000 yuan. The latest Model Y is different from the previous two Model Y models mainly in motive power and battery system as it has cancelled the front induction asynchronous motor and is driven only by the rear wheels. Its battery pack has switched from the 76.8Kwh ternary battery pack to 60Kwh LFP battery pack provided by CATL. Its driving range is 525 kilometres, which is higher than the High Performance version (480 kilometres) and is only 69 kilometres less than the Long Range version.

In the entire Tesla product matrix, its driving range is second only to the Model Y Long Range version (594 kilometres) and the Model 3 Performance version (605 kilometres), placing it in the middle level. 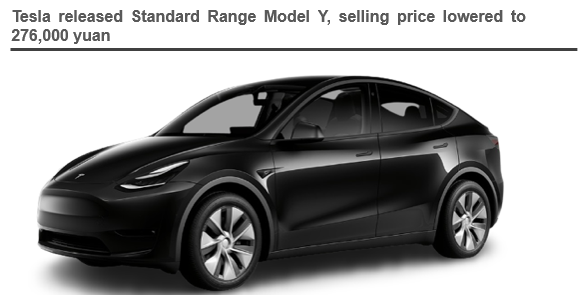 The Standard Range Model 3 experienced two substantial price cuts last year. The first price cut occurred in May 2020 when prices fell to less than 300,000 yuan for the first time, with the selling price at 271,500 yuan after subsidy. This allowed the sales of Model 3 to skyrocket 173% MoM that month and 32% in the following month. 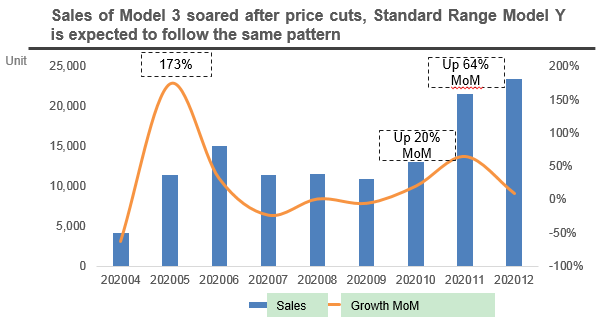 China's NEV market stopped falling and rebounded in March, with sales of model A00 occupying half of the market share
Sales of new energy passenger vehicles with Compulsory Traffic Insurance were 188,000 units in March, up 99.1% month-on-month and 288.4% year-on-year.

SMM Webinar Series - Impact on China’s NEV sector and upstream raw material prices after the NPC meetings
China's new energy vehicle (NEV)  industry  is currently facing tough challenges as it enters a “painful period” after being affected by the decline of the NEV subsidy policy in 2019 and COVID-19. The development of the NEV industry remains as a focus of the Chinese government after the "two sessions” annual meetings chaired by the National People’s Congress (NPC). Various regions in China have introduced stimulus policies on the NEV market.

MOST POPULAR
1.Average Price of Spodumene Concentrates Broke Through $5,000/mt, and Battery-grade Lithium Carbonate Prices Gained another 1,500 yuan/mt
2.Lithium Carbonate Prices Jumped by 1,000 yuan/mt in A Single Day, Lithium Hexafluorophosphate Prices Rose for Five Consecutive Days
3.Cobalt Sulphate Prices Plummeted within 4 Months, and Will the Ternary Battery Market Usher in a Turning Point?
4.LFP Production in H1 2022 Rose 122% YoY, Is Supply Surplus An Established Fact in H2?
5.Refined Cobalt Prices Soared Following Rumours on Government Stockpiling
Shanghai Metals Market
Privacy PolicyCompliance CentreSMM Credit ServiceContact UsAbout UsTerms & ConditionsSitemap
Notice: By accessing this site you agree that you will not copy or reproduce any part of its contents (including, but not limited to, single prices, graphs or news content) in any form or for any purpose whatsoever without the prior written consent of the publisher.