CST
Source:SMM
China imported 1.83 million mt of copper ore and concentrate (hereinafter referred to as copper concentrate) in November 2020, a month-on-month increase of 8.3% and a year-on-year decrease of 15%, according to China Customs. 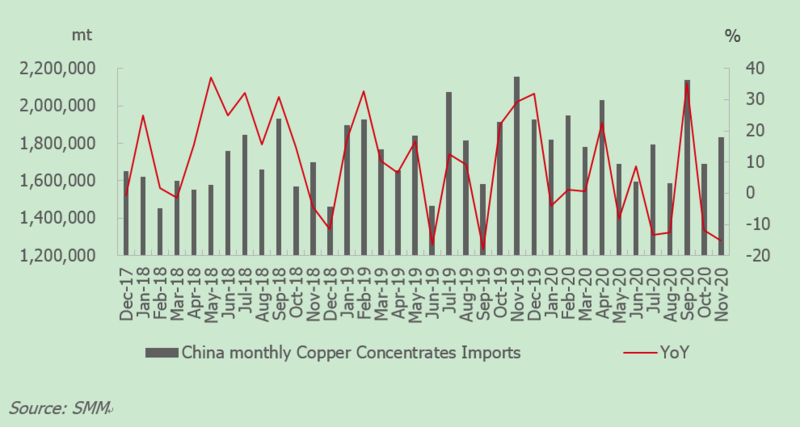 According to customs data, 88,900 mt of copper concentrate was imported from the US in September 2020, and imports in October stood at 20,100 mt. Imports in November dropped further to 10,300 mt. Imports from the US are not compared on a year-on-year basis due to a 25% tariff in the same period of 2019. However, copper concentrate imports from the US fell to low levels after rising to a high level in September despite the tax exemption by China Customs. US copper concentrate inventory at traders has declined after being destocked in September, reducing supply. Meanwhile, importers will need to apply for Customs approvals for each batch of imports under bill of lading, which has increased operational risks.

Refined nickel imports fell to 6 months low in October, nickel briquettes and electroplate nickel imports to increase in proportion by end 2020
China's refined nickel imports totalled 8,414 mt in October, down 37.65% on the month and 29.09% on the year. The import of unwrought unalloyed nickel with the Ni and Co total content over 99.99% and Co content less than 0.005% dropped 93 mt from September to 762 mt. The imports of other unwrought unalloyed nickel dropped 4,157 mt to 7,652 mt on the month, accounting for 90.94% of the total import. China's import of refined nickel from January to October cumulated 106,000 mt, down 37.98% on the year.