SHANGHAI, Nov 13 (SMM) — Silicon prices rose sharply after the National Day holidays, the metallurgical grade low-grade specifications rose about 1,000 yuan in less than one month, and the metallurgical grade high-grade silicon and chemical grade silicon also increased about 400-600 yuan/mt. The rapid increase in prices is due to the same expectations between buyers and sellers for the reduction of supply and the increase of production costs during the dry season, leading to the stockpiling before entering the dry season. In addition, the domestic downstream demand increased obviously in the fourth quarter, especially the silicone monomer and polysilicon sectors have entered the peak season of consumption, and operating rates of aluminium alloy stood high. Combined with the increase of export orders due to the recovery of overseas demand, silicon prices increased in October.

The silicon plants in Sichuan, Yunnan began to reduce production at the end of October. Under the condition of abundant power supply and acceptable furnace condition, it is estimated that the large-scale shutdown time in Southwest China will be after the full arrival of the dry season at the end of November as the silicon plants will definitely prolong the start-up time to the greatest extent for the high profit. The supply increment of other producing areas including Xinjiang will be very limited during the whole dry season due to the shortage of ore supply in Xinjiang, another main producing area, having not been fundamentally solved.

On the demand side, all domestic monocrystalline silicon plants started production normally except for stopping in Zhongtian, and DMC prices rose strongly driven by end-user demand. The transaction prices reached 23,500 yuan/mt as of November 10, and manufacturers are reluctant to sell due to low inventories. It is expected that this wave of demand will continue until January next year. Polysilicon is in the peak season of seasonal consumption, and the demand growth brought by centralized photovoltaic installation will continue. Prices of polysilicon have declined month on month, but the profit of polysilicon is still high. Metallurgical-grade downstream aluminium alloy is booming in production and sales driven by the demand of terminal automobiles. According to the orders received by the aluminium alloy factory, operating rates are expected to remain high until the end of this year.

The increase in silicon prices has slowed down in November after some good news in the dry season. It is expected that traders will be willing to purchase at high prices while there will be no goods in the market at the end of the year due to high downstream inventories and the increasing pressure on the carrier to withdraw funds. 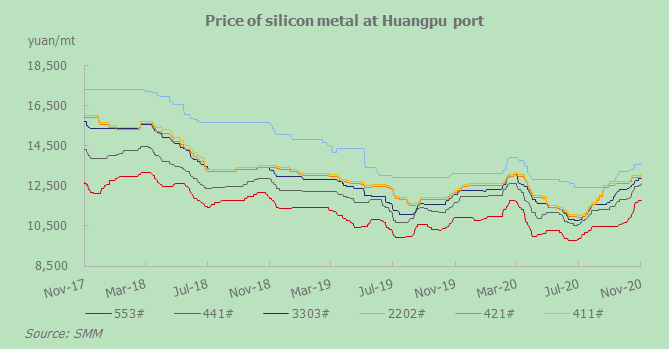 Exclusive: China's base metals output in February
An SMM survey showed that China produced 821,800 mt of copper cathode in February, rising 2.89% from January and 20.31% from a year ago, as some copper smelters recovered from maintenance.

SMM Morning Comments (Nov 16): Shanghai base metals were mostly higher as a giant trade deal were signed
Nonferrous metals on the SHFE were mostly higher on Monday morning, and their counterparts on the LME rose across the board, as as 15 economies in Asia signed a deal that formed the world’s largest trade alliance.

All
MOST POPULAR
1.SMM Review of Pre-Holiday Base Metals Market and Prospect
2.Silver Prices Kept Falling amid the Hawkish Remarks in the Market
3.Macro Roundup (Sep 29)
4.Macro Roundup (Sep 22)
5.Macro Roundup (Sep 26)
Shanghai Metals Market
Privacy PolicyCompliance CentreSMM Credit ServiceContact UsAbout UsTerms & ConditionsSitemap
Notice: By accessing this site you agree that you will not copy or reproduce any part of its contents (including, but not limited to, single prices, graphs or news content) in any form or for any purpose whatsoever without the prior written consent of the publisher.