SHANGHAI, Nov 3 (SMM)—The general office of the State Council issued the Development Plan for the New Energy Vehicle Industry (2021-2035) on November 2. It suggests that the average power consumption of new pure electric passenger vehicles should be reduced to 12 kwh/100 km, sales of new NEVs should reach 20% of total new vehicle sales, and highly automatic driving vehicles should be used for commercial purposes in designated regions, with convenience of charging services improved significantly. The plan mentions the current NEV development trend in China and its future vision, and puts forward the need to continue to improve technological innovation, build a new industrial ecology, promote industrial integration and development, improve the infrastructure system, deepen opening up, exchange and cooperation, and establish safeguard measures in the future. 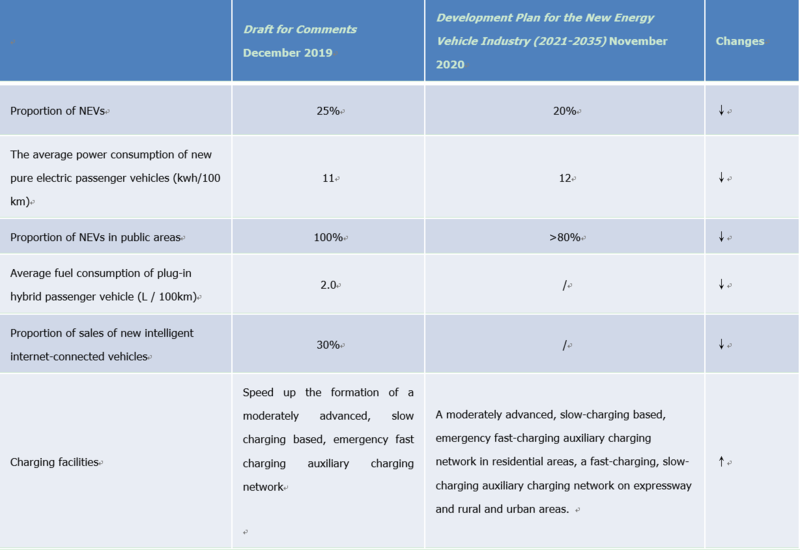 Some of the contents in the plan have been changed compared with the draft for comments issued by the Ministry of Industry and Information Technology (MIIT) in December last year. For example, the proportion of sales of new NEVs was cut from 25% to 20%, the provision that "the average fuel consumption of new plug-in hybrid (including extended range) passenger cars will be reduced to 2.0 L/100 km" is deducted, and from 2021, the proportion of NEVs in national ecological civilization experimental areas and key areas of air pollution prevention and control should not be less than 80%.

The followings are SMM’s interpretation of the new development plan for the NEV sector.

1.   The proportion of sales of new NEVs was cut from 25% to about 20% of total new vehicle sales

The proportion of NEVs stood at about 5% in 2019. Its output and sales fell significantly since July 2019 after subsidies were cut. This year, affected by the global COVID-19 pandemic, consumption recovered at a slow pace. As of September, proportion of NEVs stood at only 4.56%. However, the market has begun to recover since September. This, combined with stepped-up production at NEV makers which intend to fulfill their annual production targets and supportive government policies, are likely to increase the proportion to the level of last year. It is reasonable to reduce the target proportion from 25% to 20% given the coronavirus outbreak.

2.   The average power consumption of new pure electric passenger vehicles should be reduced to 12 kwh/100 km

3. Since 2021, the proportion of NEVs in the public areas of national ecological civilization experimental areas and key areas of air pollution prevention and control shall not be less than 80% of the total new buses, taxis and logistics vehicles

The new policy has kept the provision stated in the "Three Year Plan of Action for Winning the War to Protect Blue Sky" issued in 2018 to accelerate the progress of electrification of buses, taxi hailing vehicles, logistics vehicles and sanitation vehicles. Currently, the taxi rental market accounts for only 20% of the passenger car market, while buses and logistics vehicles account for the largest proportion in new energy buses and special purpose vehicles. The driving range of electric vehicles could fall sharply in extreme weather, and charging facilities are still not complete in most areas, which has made it impossible for them to fully replace fuel vehicles.

The policy emphasizes the promotion of intelligent and orderly slow charging service mode in residential areas supplemented by emergency fast charging, speeding up highways and urban and rural public slow charging networks supplemented by fast charging, and encouraging the application of electricity exchange mode. It strengthens the convenience of charging piles and better promotes the electrification process in the public domain. As of September 2020, there are 1.42 million charging infrastructures in China, up 27.2% year on year, but they are still far from enough for the new energy market. Charging service is an essential and crucial link in the field of new energy vehicles. Giving financial subsidies to charging piles will better stimulate the construction of charging piles in the future, and will increase consumers' convenience and willingness to purchase new energy vehicles.

This "Plan" makes an all-round plan for China's new energy vehicle market. The regulations on the penetration rate and power consumption requirements of new energy vehicles in the future will be more reasonable. In addition, the construction of charging and replacing services, the power battery recycling system and the national supervision are strengthened. The plan also has a positive impact on the demand for cobalt and lithium. More reasonable plan of new energy market sales in 2025 and beyond can also drive the future demand of power lithium batteries, in which cobalt and lithium raw materials account for a relatively high proportion, so the demand for cobalt and lithium raw materials will still maintain a high growth rate in the next five years and in the long run, and the balance between supply and demand will tend to be reasonable.

Lithium Carbonate Prices Soared near CNY
The average monthly price of battery-grade lithium carbonate was 236,478 yuan/mt in December 2021, up 20% on the month. The prices are likely to rise further as the downstream restocking extends.

Prices of Refined Cobalt Climbed 14% MoM in December
The monthly average price of refined cobalt stood at 473,000 yuan/mt in December, an increase of 14% MoM and 78% YoY. The prices are expected to climb further in January.

Has the Third Round of Lithium Price Hike Started?
The market sentiment of lithium ore increased further. SQM, the world's second-largest lithium miner, predicted that the average price of lithium will rise by nearly 50% compared to Q3 in Q4.

Exclusive: China's Metals Output in October
China’s copper cathode output stood at 789,400 mt in October, down 1.7% month on month and 3.9% year on year.

Rising Lithium Products Prices in South America to Shore Up Global Lithium Prices
Most of the companies that extract lithium from salt lakes in South America sell lithium products mainly through long-term contract. And selling prices were low for orders executed in the first half of 2021, most of which were signed at the end of 2020, according to CITIC Securities.