After entering the third quarter, domestic copper consumption weakened, while domestic refinery supply increased month-on-month, and copper supply was no longer tight in the second quarter. During the same period, overseas demand recovered, overseas explicit inventory decreased significantly and the proportion of warehouse receipts cancelled remained high., LME back structure strengthened. Copper prices are strong outside and weak inside so that the import window has been closed, import copper demand has declined significantly, Yangshan copper premium has fallen in light trading. Traders reduced zero order transactions one after another, and the liquidity of the entire foreign trade market fell to a low point, so the import volume of electrolytic copper declined month-on-month in August. 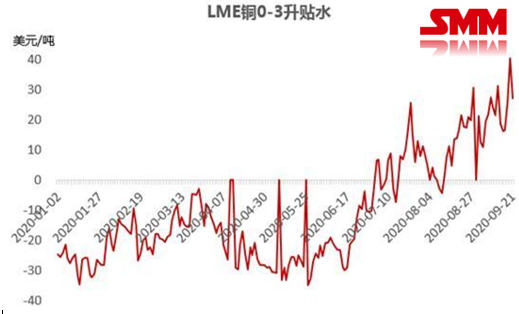 [SMM Analysis] LME continues to maintain the Back structure and the copper premium is falling all the way down.

In August 2020, China exported a total of 11300 tons of refined copper, an increase of 8.07 percent over the previous month, and a decrease of 42.95 percent over the same period last year. From January to August, China's exports totaled 145100 tons, down 37.78 percent from the same period last year. The month-on-month increase in exports was mainly due to weaker domestic copper consumption and most of the smelters were exported to bonded areas, but there was only a slight increase due to the limited number of offshore goods.

According to SMM research, copper inventories in the Shanghai Free Trade Zone increased by 5700 tons to 282200 tons on Friday, the eighth consecutive week of growth. The amount of copper exported by domestic smelters to the bonded area is relatively stable, and the increment of copper inventory in the bonded area this week is still mainly from overseas sources of goods arriving in Hong Kong. Import prices are still at a substantial loss, pre-holiday demand for incoming goods is very weak, Yangshan copper premium accelerated decline to a new low for the year, and incoming goods continued to flow into the bonded warehouse.

Codelco keeps 2020 China copper premium unchanged at $88/mt
This is the same level as for 2019, but much higher than the average for spot trades so far this year