SMM9, March 25: since the beginning of this year, due to the continued spread of the overseas epidemic, the output of some foreign tin smelters has declined due to the temporary shutdown. For example, the total tin output of Peruvian tin miner Minsur in the second quarter was 4021 tons, compared with 6283 tons in the same period last year, down 36%. In the first half of the year, 9543 tons of tin was produced, down 17% from the same period last year. Indonesia's Timah produced 27833 tons of refined tin in the first half of this year, with sales of 31508 tons, compared with 37700 tons and sales of 31600 tons in the same period last year.

On the supply side in Myanmar, due to the impact of the rainy season, the Manxiang mining area in the WA region of Myanmar collapsed on August 20, seriously affecting mine production, and the rainy season is not over yet, making it difficult to repair the mine. Production in the mine is not expected to resume until at least the end of October. According to SMM analysis, Myanmar tin mine production reduction is expected to last until October, a monthly reduction of about 1000 metal tons. In addition, about 2700 tons of tin were imported in July, which was almost consumed in July and August. The domestic silver mine starts construction, and the tin supply is expected to return to about 600 tons in the normal plant in September. Taken together, it is expected that the tin supply will be reduced by about 2000 tons in September compared with August.

The tightening of the supply side is a support for tin prices and keeps them high. On the demand side, preliminary research shows that the output of the solder industry increased slightly in August compared with July, which is related to the traditional peak season of the industry. The chemical industry is affected by foreign trade, and some enterprises have reduced their production. As solder accounts for a large proportion of downstream tin demand, overall, downstream demand is expected to increase slightly in September and October.

However, with the continuous repetition of overseas epidemics and the more changeable international situation, the entire non-ferrous metals market has fallen into an unpredictable situation. The continuous rise of the US dollar in late September has put collective pressure on the commodity market. Shanghai and tin also fell close to the 140000 mark in a row.

How will the economic situation at home and abroad affect the tin market in the future? How does the demand of tin market evolve? Can the fundamental pattern of weak supply and demand in Xi City be improved? How to choose the future direction of the tin price on the edge of the cliff?

The 2020 (10th) Tin Industry chain Trading Summit, sponsored by (SMM) of Shanghai Nonferrous Network Information Technology Co., Ltd., will be held in Shanwei, Guangdong, China from October 29th to 30th. At the meeting, there will be macro, industry experts and corporate bigwigs and senior analysts to interpret the current topics of concern in Xi City.

2020 is a special year, and the epidemic has a great impact on various industries. I hope that under the cooperation of everyone, we can break the predicament and create good results again.

October 29th waiting for your arrival ~! 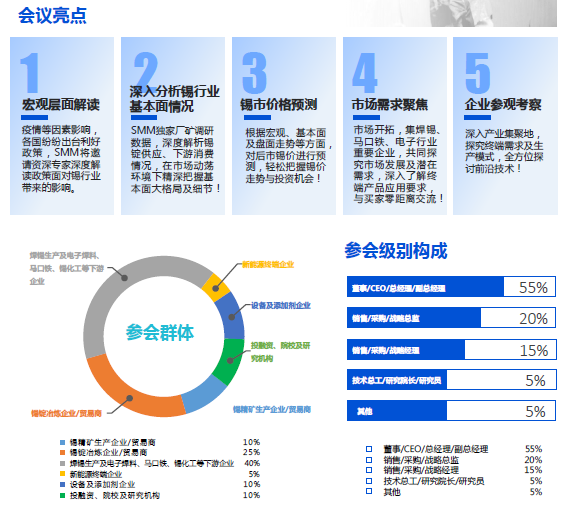 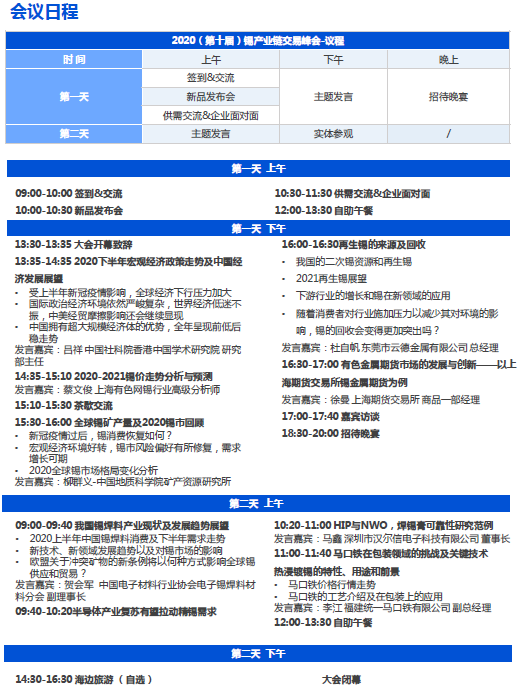