Tesla's share price plummeted because: on the one hand, the battery technology results released by Tesla's "Battery Day" on Tuesday fell short of market expectations, and the 100% nickel battery Musk mentioned did not specify when it would break through the technical difficulties to achieve mass production. In addition, the instability caused by cobalt-free batteries, and the lithium nickel manganate materials that may be made by 2gamma 3Ni and 1max 3mn did not mention how to solve the related safety problems. With regard to the large battery, the battery day did not mention the specific materials used in the battery, or it is still mainly ternary, mainly through the electrodeless ear technology to increase the cell diameter, the actual energy density of the single cell has not changed much.

On the other hand, Tesla's network appeared to be malfunctioning on Wednesday morning, making it impossible for many car owners to connect to their cars with the company's mobile app.

In addition, it is reported that Tesla filed a lawsuit against the Trump administration and the US trade representative Robert Lighthizer at the International Trade Court in New York to prevent the US government from imposing tariffs on Tesla's imports from China. Tesla hopes the court will invalidate the two batches of tariffs imposed by the Trump administration and ask the government to refund the duties and interest paid by Tesla.

Musk said at Tesla Battery Day that Tesla will cut battery costs in half through technological and process innovation in the next few years, and will launch electric cars priced at $25000. Mr Musk's cost-cutting efforts also weighed on Tesla's suppliers, with the share price falling, with Ningde down more than 2 per cent, Ganfeng lithium down nearly 5 per cent and Panasonic down more than 1 per cent. At one point, Panasonic fell more than 5 per cent in LG chemical trading. 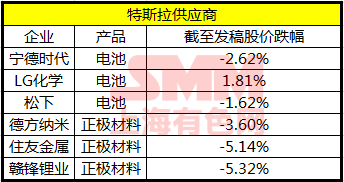 Mr Musk said Tesla planned to continue purchasing batteries from existing suppliers and even other possible suppliers: "We intend to increase rather than reduce the number of batteries purchased from Panasonic, LG and Ningde era (and possibly other partners). But even if battery suppliers move forward as fast as they can, we still expect severe shortages by 2022 and beyond, unless we act on our own. "