CC process has the advantages of short process, low energy consumption, low production cost and high production efficiency, so it is widely used in the production of battery shell.

Disadvantages: non-uniform structure, coarse grains in the surface layer and small equiaxed grains in the core layer, how to obtain uniform grains is very important. 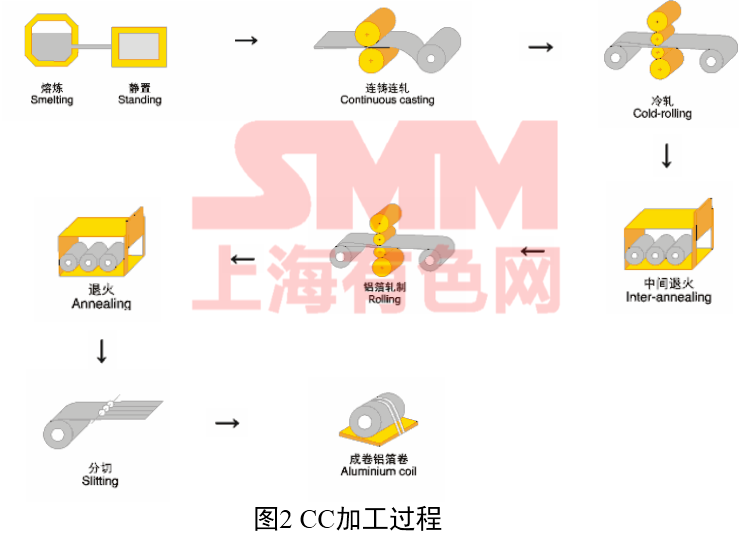 Two-stage annealing process: Paton et al obtained a large number of precipitates in 7075 and 7475 aluminum alloys by overaging, which effectively prevented the grain growth process during subsequent annealing and refined the grains. There should be a high-density precipitated phase before recrystallization, and the dispersed phase firmly binds the grain boundary during annealing, which makes the grain grow very slowly. It can be inferred that the grain structure of Al-Mn alloy can be controlled in a similar way.

When annealed at 450 ℃, the total content of precipitation reached the maximum, and a large number of fine and dense granular dispersed phases were obtained. In addition, only the recovery process occurs at this temperature. The dispersion phase hinders the grain boundary migration so as to restrain the process of grain growth and refine the grains. 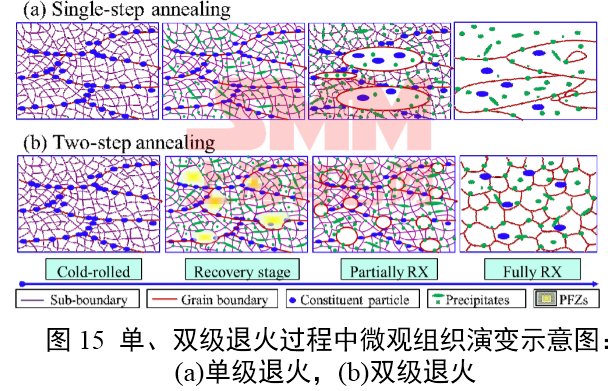 Single-stage annealing: a large number of Mn-containing dispersed phases precipitate at the grain boundary / subgrain boundary, which hinders the growth of subgrains into recrystallization core, and the nucleation rate is low.

Effect of annealing on Microstructure and Properties of CC3003 Aluminum foil

After 98.6% cold rolling deformation, the strength of the two kinds of foil is very high, and the tensile strength is as high as 294MPa, but their plasticity is very poor, only 2.5% to 3%. After annealing, the strength of single-stage and double-grade foil decreased and the toughness increased.

There is a platform in the yield strength curve of two-stage foil in the temperature range of 250-310 ℃.

A new type of casting-rolling 3003 battery shell production process was developed, that is, cast-rolling plate + cold rolling + two-stage intermediate annealing system + foil rolling + low temperature finished product annealing, and the cast-rolling 3003 battery shell products with high strength and toughness were obtained. The key technology is to control the grain size after intermediate annealing and to ensure the total processing rate of foil.

Chenyu-Fuji's phase 1 lithium battery anode materials project commissioned in Hunan
The project is designed with a total capacity of 20,000 mt/year

Dynavolt Tech to build 5GWh lithium battery lines in Henan
The first stage of the project, designed with a capacity of 1GWh, will commence construction before Dec 31

BMW ordered €10 billion worth of battery cells from CATL, Samsung SDI
Order volume from CATL will increase from €4 billion to €7.3 billion

Most Read
feature
1.IMPACT ON 2020-21 WINTER PRODUCTION CUTS
feature
2.SMM Webinar Series: China Policies Update
data analysis
3.The new standard of imported scrap aluminum to be launched in November
price review forecast
4.SMM Morning Comments (Oct 19): Shanghai base metals traded mixed after the release of Chinese economic data
price review forecast
5.SMM Morning Comments (Oct 28): Shanghai base metals rose for the most part as investors eye China’s 14th five-year plan
China Metals Market
Privacy policyCompliance CentreSMM Credit ServiceContact UsAbout UsTerms & ConditionsSitemap
Notice: By accessing this site you agree that you will not copy or reproduce any part of its contents (including, but not limited to, single prices, graphs or news content) in any form or for any purpose whatsoever without the prior written consent of the publisher.