SMM9 March 16: the recent poor performance of the thread market is far from expected. Spot market, the price of the national snail market fell continuously last week, falling by about 30 yuan / ton as a whole. The futures market also fluctuated and fell all the way, coupled with high social inventories and continuous negative falls in prices. 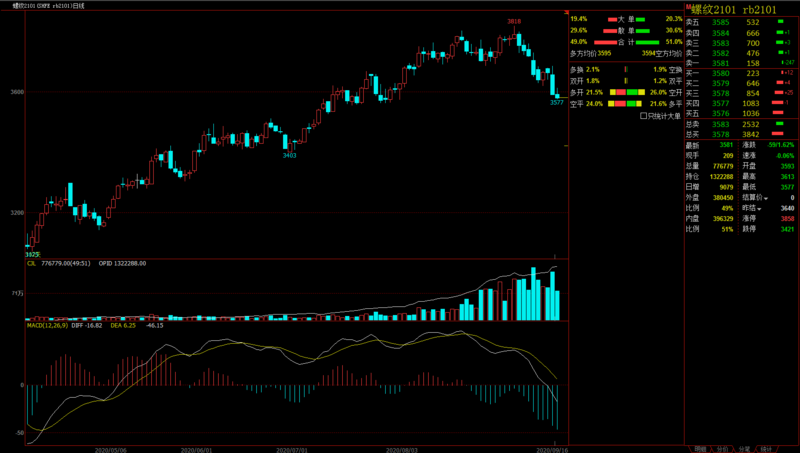 Steel inventory deceleration is slow, high supply and high inventory cause concern. According to SMM data, as of September 10, the country's total inventory of building materials was 11.4883 million tons, with a month-on-month ratio of-0.7% and + 49.4% from the same period last year. The market has been looking forward to the peak season for a long time, the explosive power of this year seems to be unsatisfactory, and the speed of reducing the stock is far less than the market expected. Among them, the social inventory was 8.1178 million tons, an increase of 29900 tons, + 47.8% compared with the same period last year, and + 0.4% compared with the previous year. Recently, the situation of stock reduction is relatively general, the contradiction between supply and demand continues to ferment, and the pressure of price pullback is greater.

The spot transaction of thread is deserted. According to SMM, yesterday, as the data of the Bureau of Statistics failed to meet the market's "peak season" expectations-crude steel and steel production continued to grow, the year-on-year growth rate of real estate and fixed investment was still negative. The expected "Bubble" was punctured, and the period screw immediately dived "demonstration". The spot market then fell, the mainstream market fell 10-30 yuan / ton, and the trading atmosphere was deserted. The panic suppressed a few days ago has begun to spread again, and the performance of the spot market is still relatively lacklustre today.

Overall, the "Golden Nine Silver Ten" peak season is relatively high risk, if the follow-up demand can not break out, the follow-up prices may be mainly a pullback. At present, it is expected that there will be some falsification of demand, coupled with the tightening of urban real estate, and compared with the first half of the year, the north will enter the heating season in mid-late November, the suppression of terminal demand will appear again, and it will be more difficult to go to the warehouse. However, in the short term, steel prices may be dominated by weak shocks. After all, cost support is still in place, cement shipments are rising, digging machine sales hit a new high in the same period, and fundamentals still have support. In the future, we will focus on the change of production and whether the inventory can decline effectively.

Tangshan to Clamp Down All Gasoline and Diesel Trucks at Ports by September for Environmental Protection
Tangshan’s Mayor scheduled works for the second half of year on air pollution prevention and control on August 2, 2017, with five main plans.

Global zinc market in surplus during Q1 2015: ILZSG
The latest statistics by the International Lead and Zinc Study Group (ILZSG) indicates that global refined zinc market was in surplus of 140,000 tons during the initial quarter of the current year.

CST
industry news
Iron miners suffer from a hike in export
BHP Billiton as well as the Fortescue Metal Group had expanded their operations, and as a result, about 219 million tonnes of iron ore were shipped through Port Hedland.

Most Read
feature
1.IMPACT ON 2020-21 WINTER PRODUCTION CUTS
industry news
2.Analysis: Impact of coke and steel prices on rumoured ban on Australian coal imports
data analysis
3.Macro Roundup (Oct 16)
industry news
4.China’s iron ore supply to remain ample as an Australian miner signed a supply agreement with a domestic steel company
data analysis
5.Macro Roundup (Oct 15)
China Metals Market
Privacy policyCompliance CentreSMM Credit ServiceContact UsAbout UsTerms & ConditionsSitemap
Notice: By accessing this site you agree that you will not copy or reproduce any part of its contents (including, but not limited to, single prices, graphs or news content) in any form or for any purpose whatsoever without the prior written consent of the publisher.