SMM9 March 14: with the release of better production and sales data of new energy vehicles in August, the A-share sector of new energy vehicles rebounded again after last week's adjustment. Today, it continued its rally last Friday. By midday, it was up 2.32%. Gaomeng Xinliao and Dongfang Electric Heat were up nearly 20%. Dewei Xinliao, Yi'an Technology, Sen Yuan shares, Zhenghai Magnetic Materials, easy things and other stocks rose more than 10%. 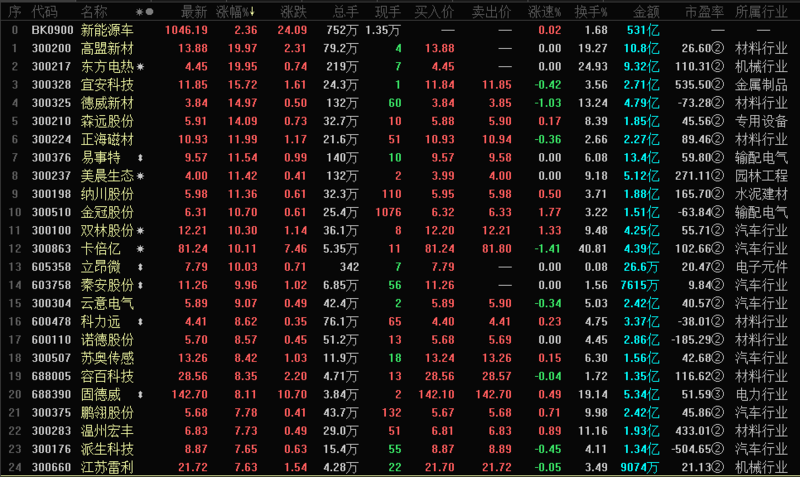 Chen Shihua, deputy secretary general of the China Association of Automobile Manufacturers, analyzed that car sales continued to maintain double-digit growth in August, and the cumulative decline in car production and sales has narrowed to less than 10%. The increase in sales volume mainly benefited from the stable recovery of the national economy, the consumption promotion month and other activities carried out by government departments, as well as the policies issued by various localities to promote consumption, which boosted people's consumer confidence.

Cui Dongshu, secretary general of the Joint bus Association, pointed out that the overall growth of the national passenger car market in August was mainly due to the better-than-expected recovery of the macroeconomic and export markets, which stabilized consumer confidence. In addition, the low production and sales base of the auto market and the obvious pick-up in retail sales of new energy vehicles caused by the implementation of the "sixth National" in some areas last year are also the reasons for the strengthening of the auto market.

According to SMM research, the demand for ternary batteries also continued to increase in Synchronize in August, among which high nickel ternary and 5-series ternary increased significantly, mainly due to overseas demand for high nickel plus 5-series ternary + CTP technology to improve energy density and safety to meet the needs of the domestic new energy vehicle market.

Cobalt: the implementation of cobalt collection and storage news has a direct impact on the spot quotation of electrolytic cobalt, but the transaction is sporadic, mainly due to the current high domestic inventory of electrolytic cobalt, low demand, and limited room for price increases. News stimulation indirectly promotes the transaction of battery raw materials, and cobalt sulfate, cobalt chloride and cobalt tetroxide are talking about an increase in the probability of order transactions, mainly because the purchase and storage news supports the cobalt price, and some enterprises are worried that the price will rise slightly.

Cathode materials and precursors: in terms of ternary precursors, the prices of cobalt and nickel salts were still fluctuating last week, downstream did not reach the procurement peak, procurement is more cautious, many enterprises are still waiting for raw material prices to be stable. Affected by the previous rise in nickel salt prices, the price of ternary materials began to increase slowly, but the downstream battery enterprises suppressed, the price increase was low. The price of lithium salt has an upward trend, but the increase is not high, which has little impact on the cost of lithium iron and lithium manganate, so it is more difficult to increase the price of lithium iron and lithium manganate.

"Click to see more data and information on the raw material side of new energy.

Looking forward to September, overseas travel during the National Day and Mid-Autumn Festival under the epidemic will be blocked, and domestic self-driving travel may increase significantly, which is expected to have an obvious effect on the high-end car market. In addition, the Beijing auto show is about to launch, the launch of new products is coming early, and the full development of offline marketing activities in various auto shows will also drive the sales of the "Golden Nine Silver Ten" car market.

The China Automobile Association expects sales of new energy vehicles to maintain a relatively stable positive growth in the second half of this year, with annual sales expected to be about 1 million vehicles (excluding Tesla).

Cobalt to Get Back to Fundamentals after Speculative Surges, SMM Reports
MB low-grade cobalt prices advanced all the way since last November, and as of Mar. 20, prices nearly doubled.

Lithium Could Be The New Gasoline As Tesla Stokes Demand
Battery grade lithium prices have spiked in the country since 2015, with the domestic rate of electric vehicle production reaching 37,000 units through May.