SMM9: Indonesia exported 6158.67 tons of refined tin in August, an increase of 11.6% over the same period last year and 27.1% over the previous month, according to data released by Indonesia's Ministry of Trade on Tuesday. 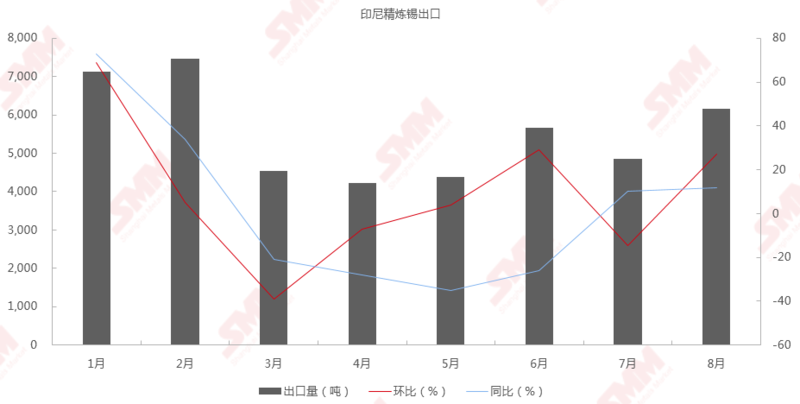 In August, the dollar fell, the dollar index as low as 91.737, the metal market generally improved, LME tin electronic disk first fell and then rose, the center of gravity moved up, the average closing price was 17663 US dollars / ton, up 6.71 percent from the same period last year, 1.4 percent higher than the previous month, reaching as high as 18510 US dollars per ton, the highest since mid-July last year. Macroscopically, the number of new people in Europe and the United States and other countries has slowed down. Under the stimulation of various policies, the economy has gradually recovered, the macro mood has improved, and demand has increased. August is the peak season of the industry, many kinds of electronic products are put on sale, and the demand for tin downstream increases.

In this environment, Indonesia, as the largest exporter of refined tin, has increased its export volume month-on-month compared with the same period last year. In addition, Tianma, Indonesia's largest tin ingot producer, put forward a plan to increase production at the beginning of this year, and Indonesia's overall export volume is expected to increase in the following months of this year compared with the same period last year. The number of new cases in various countries rebounded in September, and we need to continue to pay attention to the control of the epidemic and the steady growth of macro demand.