CST
data analysis
Source:SMM
SMM data showed that inventories of hot-rolled coils (HRC) and plates across social warehouses and steelmakers, which are used in automobiles and home appliances, stood at 3.95 million mt in the week ended September 4, after a 2.06% increase in the previous week.

SHANGHAI, Sep 4 (SMM) - SMM data showed that inventories of hot-rolled coils (HRC) and plates across social warehouses and steelmakers, which are used in automobiles and home appliances, stood at 3.95 million mt in the week ended September 4, after a 2.06% increase in the previous week. The stocks were 16.7% higher than the same period last year.

Operating rates of blast furnaces (BFs) at Chinese steelmakers this week came in at 89.6%, which remained unchanged from last week, according to SMM survey. In addition, the hot rolling output maintained stable at a high level this week as operating rates and production of hot rolling lines at various steelmakers basically remained stable. The actual end-users consumption less than expectations at high prices led to a rise of inventories.

SMM data showed that HRC stocks across social warehouses stood at 2.75 million mt this week, with a rise of 3.48% from the prior week, and up 15.9% from a year ago.

The impact of typhoon weather on shipments gradually weakened and steelmakers in north China significantly increased HRC shipments to the south. Steelmakers correspondingly accelerated the shipments to social warehouses, improving the market supply from the previous period. However, affected by the news environmental protection which limited production, hot-rolled coils spot resources rose again at a high level this week, leading to concerns about high prices and cautious purchasing. The actual consumption was less than expectations. That also accounted for the sharp rise of HRC stocks across social warehouses this week. 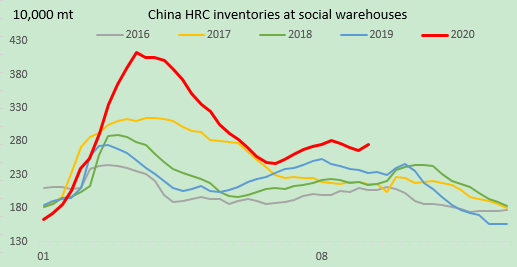 Steelmakers in north China accelerated the shipment recently, and the in-plant inventories gradually shifted to the social warehouse. In-plant HRC inventories halted its buildup and started to fall due to the enlarged prices difference between cold-rolled coils and hot-rolled coils and large shipment of the cold-based resources of steelmakers. 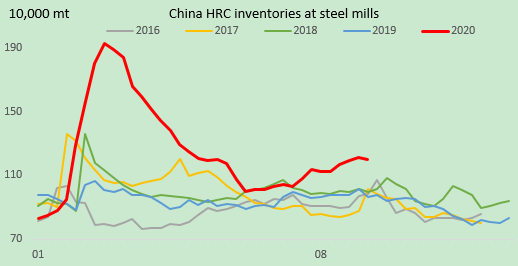 Although the output of hot-rolled coil was relatively stable, high prices suppressed the end-user demand obviously, leading to the accumulation of hot-rolled coil inventories and increasing the market supply pressure, especially in east China.

Demand is likely to improve in the following weeks, while the overall release will be delayed due to the suppression of high prices. Meanwhile, traders are pressurised by increasing inventories. Spot prices are expected to trend lower in the next few weeks without the support of positive news.

China hot-rolled coil, plate output to grow in May as mills recover from maintenance
An SMM survey showed that 35 steelmakers in China plan to produce a total of 9.34 million mt of hot-rolled coils and plates in May, up 3.1% from the realised output of 9.06 million mt in April.

Most Read
feature
1.IMPACT ON 2020-21 WINTER PRODUCTION CUTS
data analysis
2.Macro Roundup (Oct 16)
industry news
3.China’s iron ore supply to remain ample as an Australian miner signed a supply agreement with a domestic steel company
data analysis
4.Macro Roundup (Oct 15)
data analysis
5.Macro Roundup (Oct 23)
China Metals Market
Privacy policyCompliance CentreSMM Credit ServiceContact UsAbout UsTerms & ConditionsSitemap
Notice: By accessing this site you agree that you will not copy or reproduce any part of its contents (including, but not limited to, single prices, graphs or news content) in any form or for any purpose whatsoever without the prior written consent of the publisher.