Today, the Shanghai Copper 10 contract opened at 52060 yuan / ton, with the lowest point of 51700 yuan / ton in the shock downside, giving up all the gains in the previous two days. At this time, the bears left the market, and the copper price returned above the 52000 yuan / ton mark, closing at 52010 yuan / ton at noon. In the afternoon, the center of gravity of copper prices rose slightly to 52100 yuan / ton, and adjusted horizontally around that position, and finally closed at 52070 yuan / ton, down 380 yuan / ton, down 0.72%. On the spot side, due to poor downstream procurement domestic refinery inventory pressure gradually appeared, the outflow of goods increased, domestic inventory still showed a slow growth trend. At the beginning of the month, traders have plenty of money, and their performance is still relatively positive. It is expected that the center of gravity of the rising water in the market is still expected to move slightly upward.

Today, copper in Shanghai is overcast, but there are still many moving average lines underneath, and the technical point of view is that there is limited room for copper prices to fall. The market focused on the US ADP payrolls in August announced in the evening, waiting to see its impact on the dollar index, supporting Shanghai copper to rise again.

SMM North China Copper spot Market KuaiBao: the holder wants to raise the price for shipment, but the downstream does not accept it. 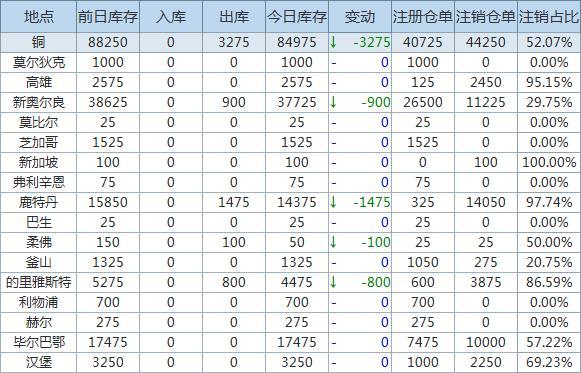 [tight supply and demand does not change consumption in peak season is expected to increase copper price in September] SMM combined with the latest market in the upper and lower reaches of the industrial chain, at present, downstream consumption has not yet come out of the off-season market, the domestic and foreign trade markets are both weak, domestic social inventory is still rising, and there is no significant disturbance information on the supply side, but the optimistic tone of continuous recovery in overseas markets remains unchanged, and LME continues to go to the warehouse, bringing strong support. The copper price fluctuates strongly in September. "View details

Copper production in the world's second-largest copper producer fell 2.2 per cent in July from a year earlier. Copper mining in Peru, the world's second-largest producer, has almost fully recovered from the impact of the epidemic, a government official said on Tuesday. Peru's copper production in July fell 2.2% from a year earlier to 198796 tons, Deputy Minister of Energy and Mines Jaime Galvez said in a report. "View details

Nickel prices likely to move higher in 2015
The rapid change in fundamentals led to high volatility in Nickel prices in 2014. The volatility is expected to continue in 2015, according to analyst reports.