SMM7, June 6: on Friday, after nearly four months of consolidation, the Shanghai Composite Index finally broke through the important mark of 3000 points, closing at 3152.81 points, a new high for this year and the biggest weekly increase of 5.81% this year. However, after breaking through 3100 points, the stock market continued to soar today, closing at 3332.88, and the Prev successfully stood above 3300 points.

After entering July, the non-ferrous metal plate broke away from the original shock trend and continued to strengthen, recovering all the lost ground since the middle of January after four consecutive gains. Since the beginning of this year, in order to resist the risk of recession caused by the epidemic, central banks around the world have released water and maintained a loose pattern, and the domestic and foreign economies have continued to recover with sufficient liquidity. At the same time, the development of the new crown vaccine has also boosted market confidence, and the global economy is expected to return to growth under national stimulus policies, which has also boosted demand for non-ferrous metals.

Zhongtai Securities pointed out that domestic and global economic data continue to improve, and enterprise order data can also reflect that the economic recovery is sustainable to a certain extent. at the same time, the impact of the epidemic on the industrial chain has shifted to the supply side, and the number of new crown pneumonia cases in Latin America, Africa and other resource countries continues to rise. After the resumption of work in major economies, the economy has recovered more than expected, while the impact of the epidemic on resource countries continues to appear, the prices of basic metals are likely to rise higher than expected, and pay attention to the pace of subsequent changes in supply and demand. Especially in the case that the economy is expected to repair further, the base metal sector will transmit from further commodity prices to stock prices, and there is a cyclical opportunity to catch up.

With the collective rise of A shares, the non-ferrous metals sector has also performed excellently recently. as of the day close on July 6, the non-ferrous metals sector index reached 8360.87, up 6.44% of the 79 stocks, 13 of which rose by the daily limit today. at the same time, all stocks are floating red. Tin shares, as the first share of the tin industry, have also performed well in recent days. Today, they stood at 10 yuan with a one-day increase of 9.09%, and quoted a price of 10.08 yuan, recovering the nearly five-month decline since February 24 this year.

Since the beginning of this year, tin prices as a whole have shown a trend of first suppressing and then rising. In mid-March, worries about the negative impact of the epidemic on the economy suddenly expanded, financial markets around the world plummeted, and peripheral stock markets were indiscriminately bombarded by worries about the epidemic. Shanghai tin is also in decline. From March 12 to 24, according to the main company of Shanghai and tin, the closing price was 133990 yuan / ton on March 12 to 107360 yuan / ton on the 24th. It fell by nearly 20%. 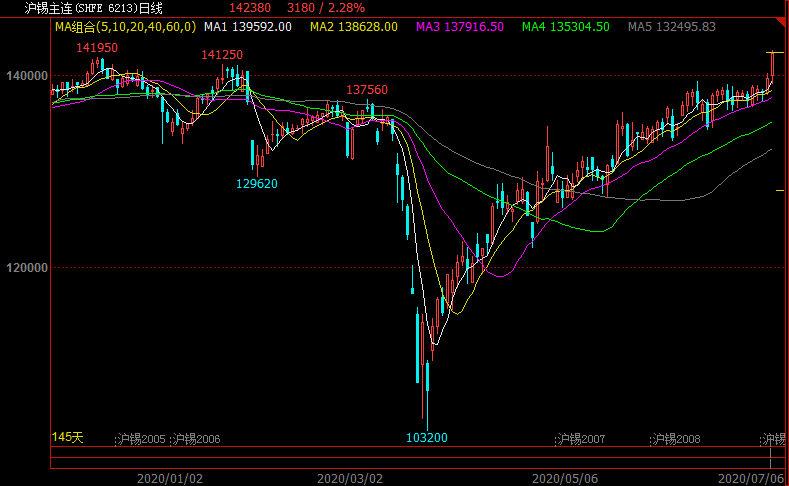 According to the first-quarter results released by Tin shares, the company achieved a total operating income of 9.31 billion in the first quarter of 2020, an increase of 4% over the same period last year, and a net profit of 47.837 million, down 75.4% from the same period last year, and earnings per share were 0.03 yuan. The company said that in the first quarter of 2020, due to the impact of the sudden new crown epidemic, global commodity prices continued to fall, non-ferrous metals prices plunged sharply in a short period of time, and due to the contraction in downstream demand, the net profit attributed to shareholders of listed companies is expected to decline compared with the same period last year.

However, since the end of March, Shanghai tin has gradually begun to recover its lost land. from a fundamental point of view, apart from the macro aspect, the United States has opened the model of unlimited quantitative easing and the domestic side has accelerated the construction of new infrastructure such as 5G, the tightening of the supply side is also an important reason. The raw materials at the tin ore end are quoted and shipped less, the raw material supply of smelters is facing a tight situation, and there are supply restrictions on the import of tin ore. The raw material supply of the smelter is facing a tight situation, and some refineries are considering reducing or suspending production to deal with the situation. The refining tin supply side may remain tight, and the short-term benefits of the refined tin supply side and macro side provide a certain support to the tin price trend.

However, while the supply side continues to be tight, the demand side is also in decline. According to the World Trade Organization's annual (WTO) Global Trade data and Outlook report, given the uncertain impact of the epidemic on the economy, basically all regions of the world will see a double-digit decline in trade volume, and global trade may shrink by 13% to 32% this year, with exports from North America and Asia the hardest hit. From an industry point of view, the decline in trade in the electronics and automobile manufacturing industries will be even more serious. Due to the impact of the global spread of the epidemic on the electronic industry chain, making it in a semi-stagnant state, thus reducing the demand for tin ingots, the weak pattern of demand-side and supply-side impact of the epidemic is still the current main theme.

Today, under the influence of the continuous entry of bulls, Shanghai tin sang all the way. By the end of the day, the main contract between Shanghai and tin was 2009 yuan / ton, an increase of 2.3% a day. In the short term, the supply of the upper and middle reaches of the tin market will remain tight. On June 27th, the Myanmar Central Committee for Prevention and Control of the New Crown virus announced that the control of the epidemic in Myanmar would be extended to July 15, and the tension in the domestic tin mine is expected to continue. The amount of imported tin ore will remain at about 60% of the normal level in the short term. The tightening of production caused by tight mine supply is expected to support tin prices to some extent. Today, the tin above Shanghai Stock Exchange has broken through all the platforms of the year, approaching the high point of September last year, and has broken through the Bollinger belt on the track. Since early April, Shanghai tin has been steadily moving upward near the 5-day moving average, the rising trend has not declined, we need to continue to observe the follow-up situation, weak below the effective stabilization, is expected to hit a high of 143600 yuan / ton in September last year. 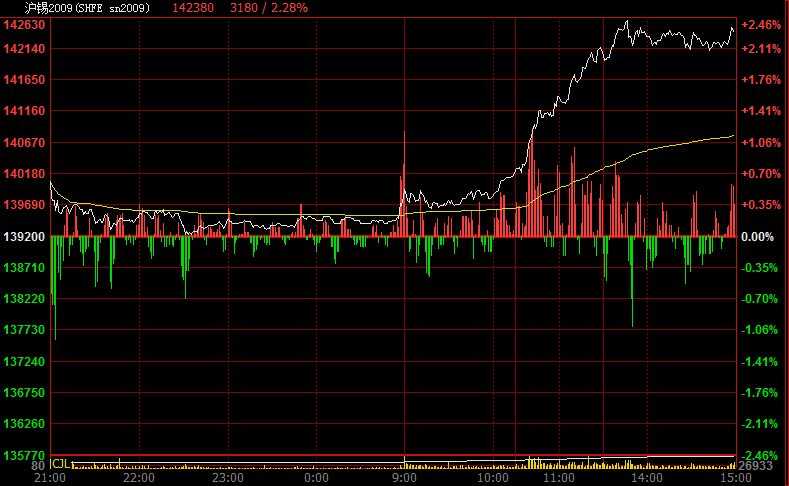 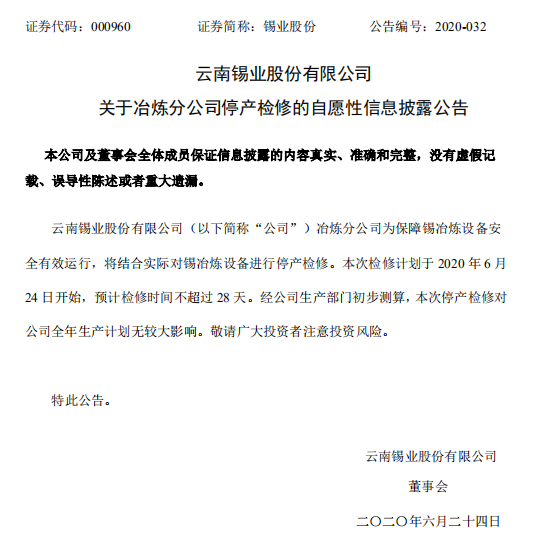 SMM Evening Comments (May 14): Shanghai base metals mostly fell on concerns about coronavirus crisis
SHFE nonferrous metals, except for aluminium and nickel, closed lower on Thursday, following after they opened mostly lower Wednesday, as concerns of the economic fallout from the coronavirus pandemic continued to grip investors.