SMM7 March 3: Shanghai tin main 2009 contract last night under the influence of the bulls, all the way up concussion, the end of the day rose sharply. After the opening, the bulls continued the trend of entering the night market. After about an hour of trading, the bulls rose to the highest point of the day of 140240 yuan / ton, briefly breaking the pressure level of 140000 yuan / ton, and then the bulls took profits and left the market, and the price dropped to around the opening level. Bulls entered the market a small amount, and the price went up. By the end of the day, 2009 of the main contract between Shanghai and tin closed at 139790 yuan / ton, an increase of 1.1%. 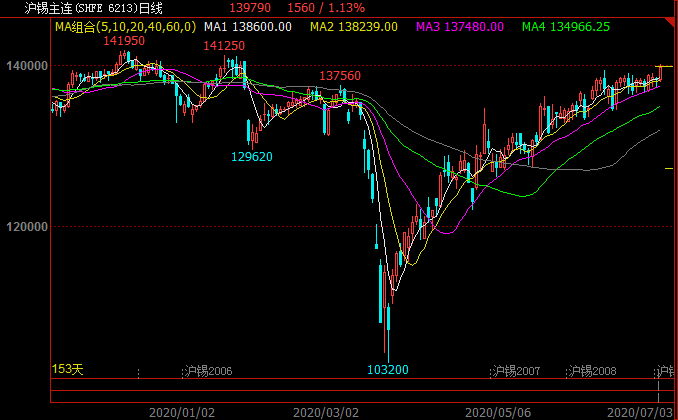 After the sharp drop in tin in Shanghai due to the impact of the epidemic, due to the country's effective control of the epidemic and good expectations, tin in Shanghai has risen steadily since the end of March. Recently, the macro environment continues to improve, and the Shanghai tin five-day moving average has risen steadily. By the close of trading today, Shanghai tin returned to the high level of the platform before the return of the year. The gap due to the decline in the epidemic has been basically made up, and the downside space is limited in the short term.

From a fundamental point of view, on June 27, the Myanmar Central Committee for the Prevention and Control of the New Crown virus announced that the control of the epidemic in Myanmar had been extended to July 15, and the tension in the domestic tin mine is expected to continue, and the imported tin ore volume will remain at about 60% of the normal level in the short term. The tightening of production caused by tight mine supply is expected to support tin prices to some extent.

From the market point of view, long forces continue to enter the market, today's Shanghai tin 2009 contract increased the position by 4234 hands. After briefly breaking 140000 yuan / ton in intraday trading, there is a pullback, considering its position cost and the high price platform before the year, it is expected that the upper pressure level may be 140500 yuan / ton.