SMM News: "your execution is amazing, especially in such a difficult time." I am very proud and proud to work with you! " Before announcing second-quarter sales, Musk wrote in an internal employee letter that the excitement was overwhelming. 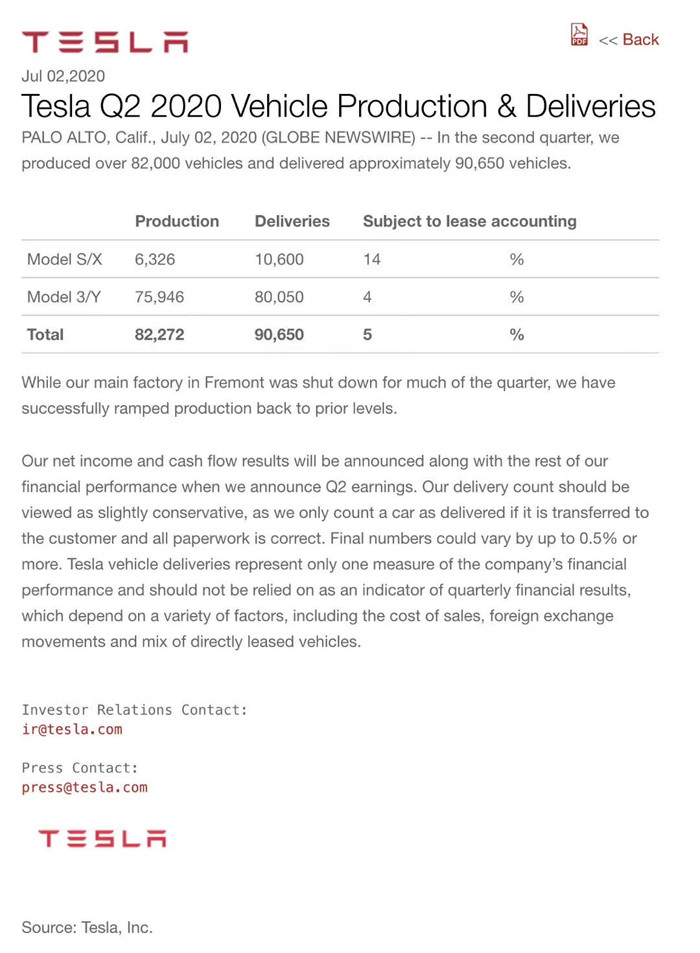 On the evening of July 2, Tesla released its second-quarter sales figures. Data show that Tesla delivered 90650 vehicles in the second quarter, including 10600 for Model X and Model S and 80050 for Model 3 and Model Y.

According to officials, the figure was significantly higher than analysts had predicted that Wall Street had predicted that Tesla would sell 83071 vehicles in the second quarter. However, this figure is almost no different from the forecast of Dan Levy, an analyst at Credit Suisse. "according to the latest reported data, Tesla's sales were very strong in June and delivery is likely to reach 9-100000 vehicles in the second quarter,", Dan Levy said before the official figures were released. Dan Levy also estimates that of the 9-100000 deliveries, about 31000 will come from China.

Dan Levy's forecast is absolutely correct, especially its forecast for sales in the Chinese market. The first electric network learned from people familiar with the matter that Tesla delivered a total of 31000 vehicles in China in the second quarter, accounting for 34.2% of its total, of which delivery reached 15000 in June, a record high.

Looking back at Tesla's delivery in China in the second quarter, from 3635 in April to 11095 in May and 15000 in June, Tesla began to make headway after a brief setback.

As for the alternative performance in April, Cui Dongshu, secretary-general of the Federation of passengers, analyzed that it was an abnormal situation. He believes that according to Tesla's usual practice, sales in the first month of each quarter are relatively low, in fact, deliberately depressed, in order to achieve better results at the end of the quarter. The sales level in May is a relatively stable state for Tesla, and its strong product power has been recognized by consumers in the Chinese market. June sales figures also better confirm Cui Dongshu's analysis.

On this basis, Tesla sells an average of 10,000 vehicles a month in the Chinese market. However, with the emergence of the lithium iron phosphate battery version of Model 3, the pattern of Tesla in the Chinese market may be changed, and sales will usher in a new breakthrough.

In mid-May, the Model 3 with lithium iron phosphate battery version appeared in the announcement of the 333rd batch of new cars of the Ministry of Industry and Information Technology. The appearance and size of the vehicle are consistent with the current standard upgrade version and long-lasting version of the rear drive. After the listing of the lithium iron phosphate version, a new round of price war is about to begin.

The battery for the lithium iron phosphate version of Model 3 will be supplied by Ningde Times, the person familiar with the matter told the first Electric Network. On May 12, at the performance presentation, Zeng Yuqun, chairman of Ningde Times, said that the supply time for Tesla is about the second half of this year. This means that the lithium iron phosphate version of Model 3 may be officially delivered in the second half of the year. At that time, Tesla may use the price advantage to make sales soar again.

With a market capitalization of more than $200 billion, it has become the most valuable car company in the world.

So far this year, Tesla's performance has been so eye-catching that it does not seem to have been affected by the new crown epidemic at all. On the one hand, Tesla's sales continue to grow; on the other hand, Tesla's market capitalization has leapt ahead of Toyota to become the most valuable car company in the world.

Data show that Tesla delivered 88496 vehicles in the first quarter. At that time, during the worst period of the new crown epidemic in china, sales of almost all car companies were falling sharply, while Tesla was up 40% from a year earlier. In the second quarter, the United States became the epicenter of the new crown epidemic. However, in terms of sales, Tesla still does not seem to have been greatly affected, and its market capitalization continues to counterattack, becoming the world's largest car company by market capitalization.

By contrast, sales of general motors, Toyota and Fiat Chrysler all plunged more than 30% in the second quarter, and Ford will report its second-quarter sales later, a move that seems to suggest that Ford's second-quarter figures are not good-looking.

On the other hand, China's new car-building forces are polarized and still have no competitors to compete with Tesla. However, on the whole, the performance of the head power headed by Weilai, ideal and Xiaopeng is commendable. Just yesterday (July 2) afternoon, Weilai also announced the sales of the second quarter, achieving a new record of delivery of more than 10,000 in the first quarter. However, compared with Tesla's more than 90,000 vehicles, Wei Lai's 10,000 vehicles are not impressive, and they still do not have enough strength to compete with them. There are many new forces that have fallen behind, making it harder to compare with Tesla. For example, Sailin Motors, which recently made a fuss over suspected fraud of its chairman, Baiteng Motors, which was suspended from production on July 1, and Boxun Motor, which is on the verge of collapse.

However, this is not over. For them, the more brutal blow may be after the launch of the lithium iron phosphate version of Model 3.

Panasonic to Expand Lithium-ion Battery Capacity for Vehicle Market
Japan-based Panasonic will expand its lithium-ion battery capacity at one plant in Himeji, Japan.