SMM5 March 29: at the end of May and the beginning of June, the weather in Guangdong changed, sometimes sunny and sometimes torrential rain, which is puzzling. The inventory of electrolytic copper in Guangdong so far this year is as difficult to understand as the recent weather. According to the latest statistics of our SMM, as of May 29th, the inventory of electrolytic copper in Guangdong was only 22362 tons, a new low for the year, a sharp drop of 96990 tons, or 81.26%, compared with the high of 119300 tons on March 4th. Detailed data is shown in the following figure:

Why does the inventory of electrolytic copper in Guangdong appear this roller coaster trend? we analyze the main reasons as follows:

The reasons for the heavy accumulation at the beginning of the year are as follows:

Supply: due to the gradual production of the new smelter, the volume of smelter shipments to Guangdong has increased significantly at the beginning of the year, and we estimate that it will increase by nearly 15000 tons per month.

Demand: 20 years of Spring Festival time is early, the downstream generally began to have a holiday in mid-January, and was affected by the epidemic after the festival, the downstream start time is generally relatively late, and most enterprises resume production one after another after February 13, but the operating rate will not return to the normal level until mid-March.

Therefore, the inflection point only appeared at the beginning of March when Guangdong electrolytic copper storehouse existed.

Reasons for continued destocking after March:

1. After the epidemic, the state has increased investment in new infrastructure to ensure growth and employment, and the operating rate of most copper downstream enterprises has been maintained at a high level, including the four copper rod plants newly put into production from the end of last year to the beginning of this year (with a total annual production capacity of 670000 tons. Monthly copper consumption of 55800 tons) also benefited from this being able to maintain a relatively high operating rate. As a result, the monthly output of Guangdong warehouse reached a record high of 113200 tons in April.

2. Due to the global spread of the epidemic, Southeast Asia, Europe and the United States, as the main suppliers of copper scrap, have to extend the time for resumption of work and production again and again. For a time, the supply of imported scrap copper has dropped sharply, and scrap copper rod enterprises can only maintain a low operating rate or even no production. This is also an important reason for electrolytic copper rod enterprises to maintain a high operating rate.

Therefore, since mid-March, Guangdong inventories have continued to decline under the dual effects of reduced supply and a marked increase in demand.

Detailed inbound and outbound data and operating rate changes are shown in the following figure: 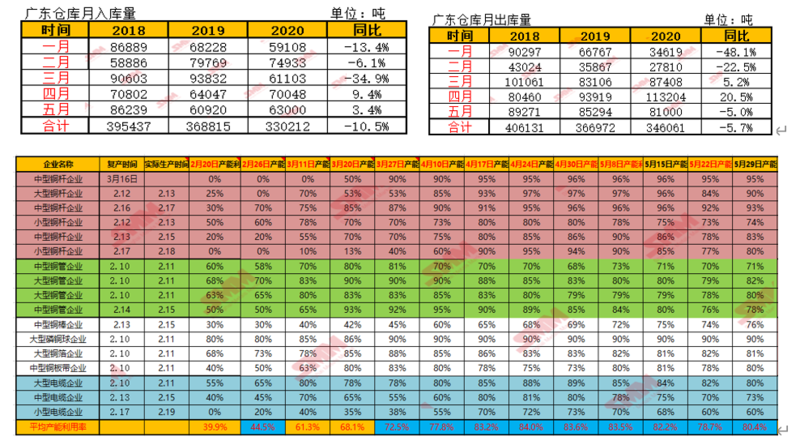 As we enter June, we think that the consumption of copper rods has decreased compared with before, but the orders of copper tube enterprises have increased again in June; overall, the total consumption of electrolytic copper in Guangdong in June is only slightly lower than that in May, but the decline is not obvious. The key to the trend of Shengshui is to see the situation of the goods. According to what we have learned for the time being, there will be too many goods arriving in the first ten days of mid-June. Therefore, it is expected that Guangdong Shengshui will remain at a high level in the short term, and it will be difficult for it to fall sharply.