The national inventory data of building materials performed poorly in this period, but SMM believes that this week's inventory performance is difficult to prove the weakening of total terminal demand. The deceleration slowed significantly, mainly due to the continued weakness of futures and rainy weather in some areas leading to a slowdown in the pace of terminal delivery, as well as the increase to the peak of thread production.

The storage volume of building materials factories across the country is very small this week, while the storage volume of some steel mills has increased. On the one hand, the output has increased to a high level, and the planned output of the steel mills in May, which hit a record high, has basically reached production in the near future, the air quality is better during the two sessions, and environmental protection production restrictions have not been obviously implemented. On the other hand, the output of steel mills has been suppressed: first, some areas such as East China, South China and parts of southwest China began to enter the rainy season, and the orders of direct supply terminals of steel mills have been slightly affected; second, at the beginning of last week, traders concentrated on the bottom demand and released more goods, and the shipments of steel mills have been overdrawn ahead of schedule; third, the prices of some steel mills have been raised this week, and traders are more cautious about the rising cost of taking goods, and their willingness to pick up goods is not high. 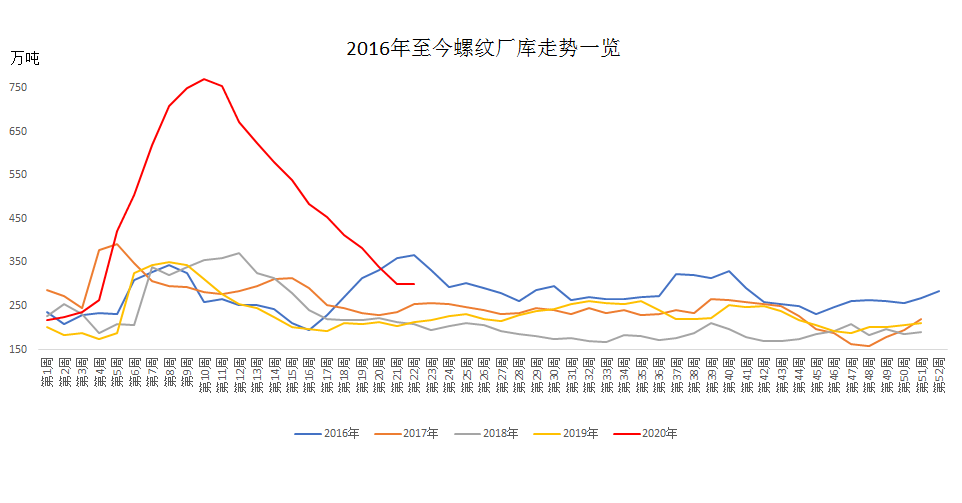 The reduction of social inventory in this period is more than that of last week, which is slightly better than that of steel mills. On the one hand, the amount of goods picked up by traders this week is less than that of last week, more in the stage of digesting existing inventory. On the other hand, futures continued to weaken this week, leaving the warehouse mostly for continuous terminal rigid demand, while terminals with inventory took a wait-and-see attitude, and the rainy weather in some areas this week also further slowed the pace of steel market shipments. as a result, the inventory reduction shrank more this week.

Figure 2: an overview of the trend of Thread Community Library since 2016 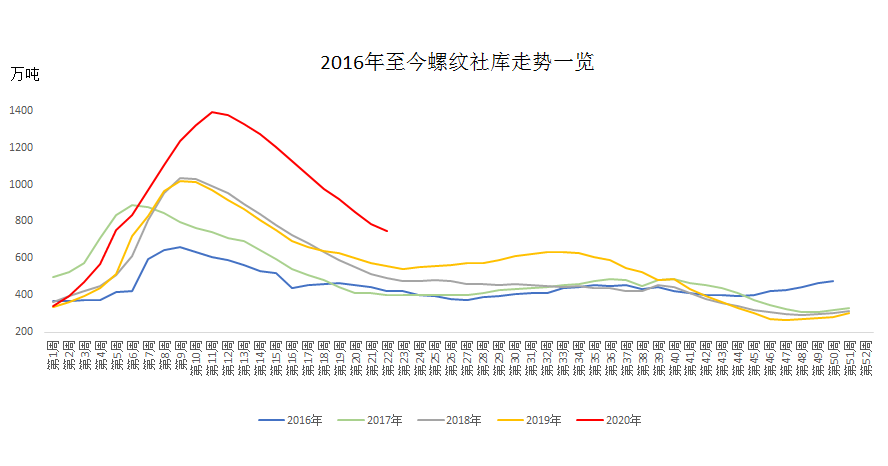 This week, the weakness of the rainy season and futures in some areas temporarily suppressed some terminal demand, and the procurement pace of the construction site slowed down periodically, but it is difficult to prove the weakening of the total terminal demand. According to the results of the SMM terminal survey, the actual demand is resilient. By the end of May, 66% of the sample enterprises indicated that there were new projects to start in the future, and 42% said that the projects under construction were under construction. (for details, please see this month's terminal research report "June terminal steel demand-terminal demand from SMM").

Next week, it is expected that the terminal rigid procurement demand will continue, while the output of steel mills has peaked, and if futures can return to a strong position, the amount of inventory reduction may be able to recover.