CST
translation
Source:SMM
In the afternoon, the index was still weak, and the three major indexes rebounded slightly and then weakened again. Hainan, automobile plate rise in the afternoon, hotel catering, audio-visual equipment plate is also stronger. Rare earth plate changes again, in addition to Hainan, home decoration plate stocks are more active, the performance of other plates is not satisfactory. As of the close, the Prev closed at 2836.80 points, down 0.34%; the Shenzhen Composite Index closed at 10682.70 points, down 1.23%; and the Chuangxin Index closed at 2071.47 points, down 1.96%.

SMM5 March 27: the morning index opened slightly higher, followed by a weak consolidation of the three major indexes. On the market, home appliances, home decoration, aviation, food processing concept stocks slightly stronger, semiconductor sector significantly weaker, bank stocks slightly pull up but the driving effect on the index is limited. On the whole, the market pullback in early trading, the money-making effect is better, the capital flows quickly, and the rotation of the plate is accelerated. Near midday, the morning index opened slightly higher after a weak consolidation, and then recovered after a rapid decline. On the disk, the dairy plate is gradually active, and yesterday's relatively strong biosafety began to differentiate. in addition, the semiconductor plate also continued to weaken, with no absolute hot spots in the market except the furniture home decoration plate. In the afternoon, the index was still weak, and the three major indexes rebounded slightly and then weakened again. The gains of sectors such as the dairy industry, which strengthened in the morning, narrowed, Hainan and automobile plates rose in the afternoon, and the hotel catering and audio-visual equipment plates also strengthened. On the whole, the afternoon market sentiment is still low, the rate of exploding board has gone up. At the end of the day, the index weakened again, and the decline of the Shenzhen Composite Index and the Chuang Seng Index continued to expand. Rare earth plate changes again, in addition to Hainan, home decoration plate stocks are more active, the performance of other plates is not satisfactory. On the whole, the market turnover is relatively low, and the plate differentiation is more obvious.

Some institutions said that under the trend of hardcover housing, the binding between real estate developers and high-quality engineering household companies is an inevitable trend, and the follow-up is expected to form an industrial chain effect; improvement in completion and delivery will boost short-term demand, and the actual conversion rate of orders is expected to increase significantly. Leading customized companies directly benefit. Daya Holy Elephant, Zhibang Home, Fenglin Group, Huida Sanitary Ware, Henglin shares, Gold Kitchen cabinets, Xi Linmen and other collective strength.

Today, the net inflow of main capital into the top ten 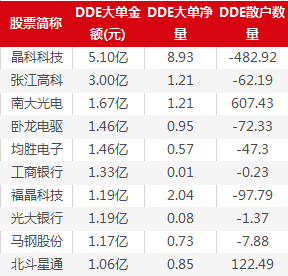 The whole vehicle plate was pulled up, Jianghuai Automobile was stimulated by the news, Zhongtai Automobile, Yaxing bus, Sinotruk and so on rose.

[national Bureau of Statistics: profits of large-scale industrial enterprises across the country fell by 27.4% from January to April]

The National Bureau of Statistics announced that from January to April, the total profits of industrial enterprises above the national scale reached 1.25979 trillion yuan, down 27.4 percent from the same period last year, or 9.3 percentage points lower than in January-March.

[Tesla: the price of all models for sale in North America will be reduced at the same time as imported models in the mainland market]

Tesla announced on the 27th that it will reduce the prices of all models on sale in North America, while in the mainland Chinese market, Model S and Model X, as imported models, will also cut their base prices at the same time. The adjusted amount will be reduced by 29000 yuan, and the principle of charging according to use shall be implemented at the same time.

[bancassurance Regulatory Commission: projects with state-oriented risk investment will give policy support in terms of scope and proportion]

The person in charge of the relevant departments of the Bancassurance Regulatory Commission said that in the next step, the Bancassurance Regulatory Commission will strengthen policy guidance, support the advantages of long term and stable sources of insurance funds, and serve the high-quality development of the economy. The first is to strengthen long-term financing support for enterprises to resume work and production. The second is to promote the market-oriented reform in the use of insurance funds. Strengthen policy guidance and give policy support to state-oriented investment projects in terms of investment scope and investment proportion. The third is to increase services to private and small and micro enterprises. Fourth, support insurance funds to invest in health, pension and other social services.

[person familiar with the matter: Volkswagen plans to acquire a 50% stake in Anhui Jianghuai Automobile Group and become the largest shareholder of Guoxuan Hi-Tech]

Heavy weight is good! Semiconductor materials have made great breakthroughs in the chip field. Concept stocks are fully combed.]

Yesterday, Beijing Yuanxin carbon-based Integrated Circuit Research Institute held a media conference. After years of research and practice, a team led by Peng Lianmao and Professor Zhang Zhiyong, academician of the Chinese Academy of Sciences and professors of Peking University, have solved the bottlenecks that have long plagued the preparation of carbon-based semiconductor materials, such as the purity, density and area of materials.

Looking to the future, Galaxy Securities said that the short-term A-share market will show a volatile upward trend. Some industries and indices will be highly resilient.

Northeast Securities pointed out that A shares are still dominated by concussion pattern, structural market and repeated rotation. In operation, they are not sad or happy, and tend to cover some positions when they fall sharply, and sell some moderately if the short-term index rebounds above the 20-day moving average.

Citic Construction Investment said that the market is characterized by a weak market, and there is still a high probability of repeated shocks in the future. Under the background that macroeconomic uncertainties affect market risk preference, defensive sectors that just need to be supported are generally favored by market funds, and investors can focus on sectors with high performance certainty, such as agriculture, forestry, animal husbandry and fishing, food and beverages, and so on.