CST
Source:SMM
China has held the most important political event of the year on Friday May 22- The National People's Congress (NPC) meetings, also known as “Two Sessions” in Chinese. The annual gatherings will also reveal Beijing's plans for how to revive an economy battered by COVID-19 pandemic, which has led to the country's first economic contraction after decades of continuous growth.

China has held the most important political event of the year on Friday May 22- The National People's Congress (NPC) meetings, also known as “Two Sessions” in Chinese.

The annual gatherings will also reveal Beijing's plans for how to revive an economy battered by COVID-19 pandemic, which has led to the country's first economic contraction after decades of continuous growth.

Please find in our special report our in-house views and the industry expert’s takeaways on the stimulus and the policies announced at the conferences.

We will keep you posted on the latest happenings via our website www.metal.com and our social media channels on Linkedin and Twitter.

Please register for our webinars as we continue to connect you with the latest happening in the China ferrous and nonferrous metals market.

The next session is happening on Thursday May 28, 4pm CST, where we present to you a deep-dive on the China domestic metals market following the National People’s Congress (NPC) annual meetings. 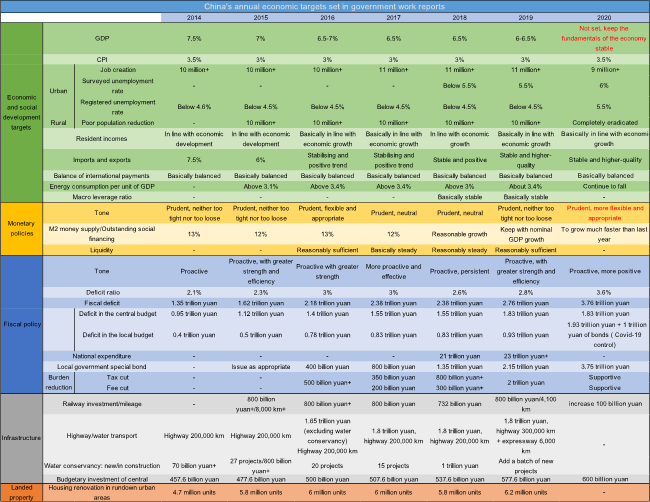 China has decided not to set a target for its economic growth for 2020 due to great uncertainties about the impact from COVID-19, and aims to keep the fundamentals of the economy stable, according to the government work report delivered on May 22.

Monetary and fiscal policies came largely in line with market expectations. Notably, the budget deficit target for this year was raised to "at least" 3.6% of gross domestic product (GDP).

As for infrastructure and real estate―major consumers of nonferrous metals, new infrastructure took centrestage as expected, while the principle of "housing is for living in, not for speculation" will remain in place and no target was set for shanty town redevelopment.

Expectations into the NPC meetings were high among metal industry participants, particularly in regards to more expectations around stimulus. However so far there is little in the way of major new announcements, just more of a reconfirmation of existing supporting policies.

China will also intensify its efforts to develop major transportation and water conservancy projects and national railway development capital will be increased by 100 billion yuan. With Beijing shifting to new infrastructure to spur its economy, the support to traditional infrastructure seems limited.

New urbanisation is another point of focus at the sessions. China will begin the renovation of 39,000 old urban residential communities this year, supporting the installation of elevators in residential buildings and the development of community services.

Without positive surprises from Beijing’s economic policies, nonferrous metals weakened across the board on Friday. SMM expects limited further boost from new infrastructure to consumption of nonferrous metals given the strength of the recovery already seen in 2Q.

Faced with a global recession and widespread of the pandemic outside China, "we must focus on maintaining security in the six areas in order to ensure stability on the six fronts,” Chinese Premier Li Keqiang said in the work report. The “six fronts” refer to employment, the financial sector, foreign trade, foreign investment, domestic investment, and expectations. The “six areas” refer to job security, basic living needs, operations of market entities, food and energy security, stable industrial and supply chains, and the normal functioning of primary-level governments.

While Beijing has abandoned its GDP target for the year, it laid out targets for other metrics such as employment and inflation.

The Chinese government abandoned its decades-long practice of setting an annual target for economic growth, and shifted stimulus focus to jobs. That, combined with more than $500 billion in infrastructure bonds to be issued this year and more monetary easing on the horizon, suggests that China is trying to cement a fragile domestic recovery without indulging in the kind of debt blowouts seen in the US and Europe, said Bloomberg.

Tang Jianwei, chief researcher at the Financial Research Centre, Bank of Communications, said that not setting a GDP growth target this year is an important decision made from comprehensive consideration of changes in the internal and external environments, and that the decision reflects a pragmatic attitude and a spirit of being practical and realistic. “Not setting an economic growth target does not mean inaction in macroeconomic policies. Counter-cyclical adjustments, especially more proactive fiscal policies and more flexible and appropriate monetary policies are needed to support employment and expand internal demand.

China's deficit-to-GDP ratio is projected at more than 3.6% this year, according to the government work report submitted to the national legislature for deliberation on Friday. The fiscal deficit will rise 1 trillion yuan from a year ago and China will also issue 1 trillion yuan in special treasury bonds for the fight against the coronavirus. The quota on local-government special bond issuance is set at 3.75 trillion yuan, up 1.6 trillion yuan from last year.

The year-on-year increase of 1 trillion yuan in the government deficit points to greater fiscal expenditures this year. A higher deficit ratio means that the government will have more money to spend, for cutting taxes fees, rents and interest rates, as well as supporting consumption and investment. This will help to safeguard employment, people's livelihoods and the development of market entities after the crippling impact of the COVID-19 pandemic pushed some companies close to bankruptcy and led to a cash crunch for local governments.

China will pursue a prudent monetary policy in a more flexible and appropriate way, according to the government report. The country will use a variety of tools such as required reserve ratio reductions, interest rate cuts, and re-lending to enable the M2 money supply and aggregate financing to grow at notably higher rates than last year.

1. The tone of monetary policy remains prudent but more flexibility is emphasised

The highlight this year’s meetings is that measures will be taken to enable the M2 money supply and aggregate financing to grow at notably higher rates than last year. M2 money refers to the sum of the deposits and cash of enterprises and residents, equivalent to the total amount of money available in an economy. The growth rate of China’s broad M2 money supply had stayed below 10% since May 2017 amid a deleveraging campaign. The M2 money supply returned to double-digit growth in March and April this year, indicating that the supply of money is also accelerating. China’s central bank recently also said that we should allow the macro leverage ratio to rise in stages. These send out a message that the growth of money in the market will be significantly increased, with a rate expected above 10% this year

2. To push for further reduction of interest rates

The interest rates will continue to fall in the long run, which is the need for economic development. There is room for a further 100bp cut in the required reserve ratio in the future (or long-term liquidity measures of the equal strength), said Zhu Jianfang, chief economist at CITIC Securities. The measures may be implanted at twice, with the timing related to the rollout of fiscal policy such as the large-scale issuance of local special bonds and the issuance of special treasury bonds.

Sticking to the principle of “housing is for living, not for speculation”

China will implement city-specific policies to promote the steady and healthy development of the real estate market, said the report.

Some cities have adjusted their respective housing policies since the second half of 2018. While some third- and fourth- tier cities tentatively relaxed regulations on the housing market amid the impact of the pandemic, rules concerning easing control on housing purchases and loans have been revoked. This reinforces China’s basic principles of real estate regulation and control.

Metals prices in China have seen a strong recovery over April and May, and sentiment ahead of the NPC meetings was very positive, with many market players expecting further signals of support to metals demand from higher spending.  While the general message of stronger credit growth and easier financial conditions was welcome by many traders, overall the lack of a commitment to a high growth target or further detailed infrastructure spending was seen as a dent to market confidence, and was the reason most metal prices closed lower on the day.

We will have a more detailed analysis of the impact of the NPC outcome to the metals industry next week.

1. SMM Webinar Ferrous Update: After the NPC meetings, will the stimulus continue to support prices or will trade issues overwhelm? (May 22, 2020)

3. China steel rebar inventories to sustain decline as supply may retreat (May 22, 2020)

Macro Roundup (Aug 23)
The US dollar hit a new 9-1/2-month high against major peers on Friday, buoyed by fears that the Delta coronavirus variant could delay the global economic recovery just as central banks begin to reverse pandemic-era stimulus.

Macro Roundup (Aug 5)
The dollar held gains on Wednesday after a quick recovery from an earlier fall as markets chose to focus on a suggestion from a top US Federal Reserve official that the central bank may reduce support for the improving economy more quickly than widely thought.

SMM Morning Comments (May 12): Shanghai base metals performance mixed as investors remained cautious over inflation worries
Shanghai base metals traded mixed on on Wednesday morning as investors remained cautious over growing inflation worries. Meanwhile, their counterparts on the LME rose for the most part.