This week, the country's total inventory of building materials was 11.897 million tons, a month-on-month rate of-8.7 percent, an acceleration of 2.4 percent, + 46.4 percent from the same period of the Gregorian calendar last year.

In this phase, the factory warehouse is still being removed at a faster rate than the social library. While the output continues to rise, the inventory in the plant is still rapidly eliminated. In addition to benefiting from the replenishment demand of the post-holiday terminal, while the output of the steel plant is increasing, but the mentality is still cautious, accelerating the transfer of the plant warehouse to the social warehouse is also an important reason. According to SMM research and statistics, as of May 11, the national blast furnace operating rate rose 2% compared with the previous month. At the same time, the planned output of sample blast furnace steel mills in May also rose sharply by 15.2%. Long process steel mills have a strong willingness to put on the market.

Figure 1: trend of Thread Factory Library from 2016 to present

This issue of the social library accelerated to the library. Last Friday, the terminal has the demand for centralized replenishment, the trend of superimposed snails is gratifying, and transactions are hot all over the country, so even if the volume of shipments this week is general and the pressure on the supply end is large, the social base is still stable at the same time. 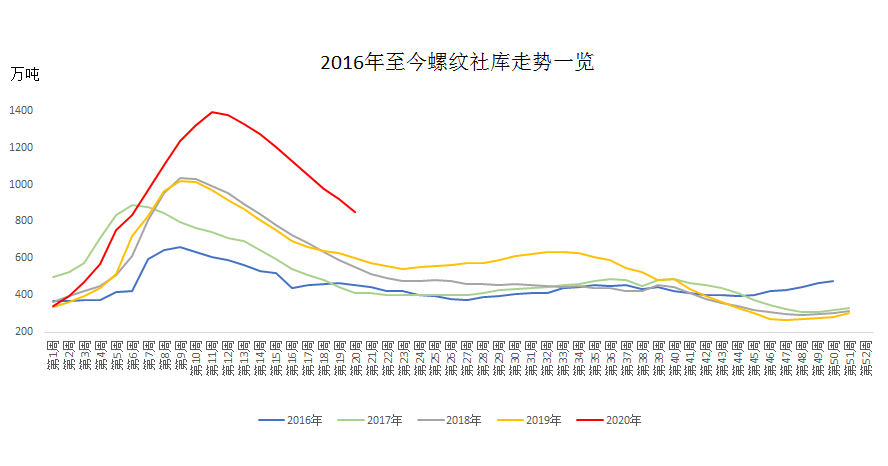 Next week, production is expected to have room to explore, although the space is already limited, but steel mills continue to increase the pressure on their own factory warehouse, is expected to continue to be as strong as this week to put into the market, the rapid removal of social libraries is more difficult.