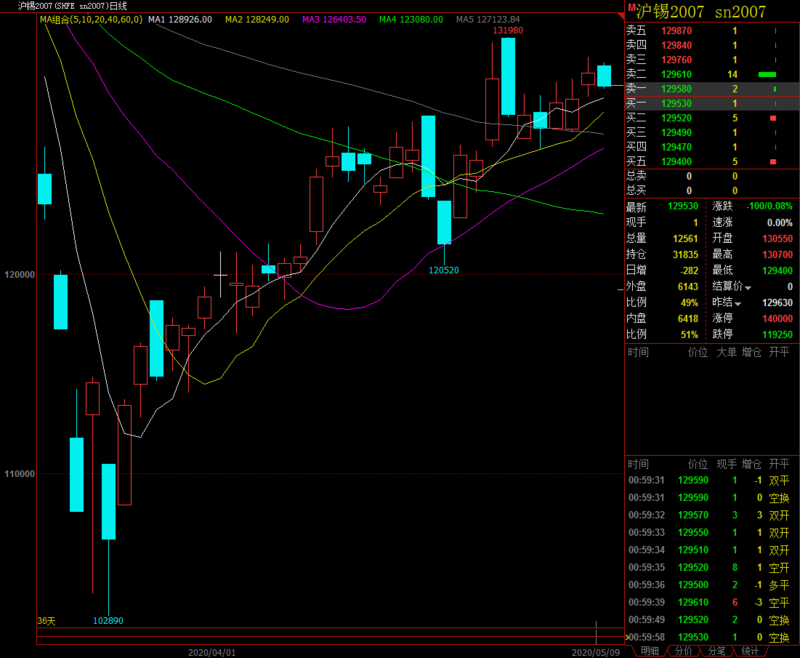 In terms of inventories, tin inventories on both exchanges fell. According to data released by the London Metal Exchange (LME), Lunxi inventories fell sharply during the May Day holiday, falling 10.37% to 5100 tons, setting a new low since August 15, 2019. Data released last year showed that Shanghai tin inventories had continued to decline since February, falling to 3572 tonnes in the week to April 30, also refreshing more than a five-month low. After the festival, LME is still in a slow downward trend.

On the data side, Indonesia exported 4220.59 tons of refined tin in April, down 28 per cent from 5868.32 tons a year earlier and 7 per cent from 4539.19 tons in March, according to figures released by Indonesia's trade ministry on Friday. Affected by the epidemic, the early Tianma Company, Alpha Ming, Malaysia smelting Group, Peru Minsu, Namibia AfriTin Mining, Minsur subsidiary in Brazil Minera ã o Taboca and Indonesian tin miner PT Timah announced temporary production cuts or shutdowns. On the inventory side, Lunxi inventories have been falling since April. This week Shanghai tin main force 2007 contract overall maintains the high concussion collation situation, the center of gravity has risen. At the beginning of the May Day holiday, bulls increased positions as the main companion with some short positions and a small number of bulls leaving the market, and the one-day trend for two consecutive trading days showed the relative stability of the center of gravity. On Friday, the bulls increased their positions again, the center of gravity of Shanghai tin moved up obviously, and the Shanghai tin 2007 contract closed at 130180 yuan / ton on Friday. During the week, it rose 2790 yuan / ton, or 2.19%, with a trading volume of 115000 hands and a position of 32117 hands, an increase of 3704 hands. This week Shanghai tin shows a positive line, the top pressure on the 20-day moving average, the bottom by the 60-day moving average support. In terms of indicators, although the daily line level MACD index showed a top deviation situation, but its fast and slow line above the zero axis showed a good situation, and the KDJ support high position into a golden fork; K line from the Brin belt on the track there is a small amount of space. Weekly level, indicators are still good, K line has not yet been from the lower track to the Brin belt in the middle of the track.

Lunxi electronic disk overall showed a small upward trend this week, early in the week affected by the rise in crude oil prices and LME tin inventory continued to decline, good Lunxi electronic disk trend of its center of gravity slowly moved up. Subsequently, affected by the domestic Shanghai tin disk high shock, Lunxi also maintained the consolidation trend, the center of gravity high position to maintain stability. Lunxi closed Thursday at $15190 a tonne. Nelon tin rose $160, or 1.06%, to 717 hands and 17313 positions, down 14 hands. The circumferential level is a small positive line, the lower part of the entity is supported by the 5-10 EMA, and the recent Lunxi electronic disk is generally in a triangular concussion finishing situation. In terms of indicators, the histogram above the zero axis of the daily line level MACD index is in a reduced state. The weekly level index is mainly good.