SHANGHAI, Apr 30 (SMM) – China imported about 130,000 mt in physical content of spodumene concentrate in March, with the average import price down 15.8% on the month and down 31% on the year to $456/mt, showed SMM calculations based on the latest customs data.

A greater proportion of spodumene concentrate imports with a lower grade of 4% by major importer Ganfeng Lithium accounted for the reduced average import price.

Last month, Chinese lithium compounds producer Jiangxi Yabao Lithium was the top importer of spodumene concentrate, as it took about 6,800 mt of lithium carbonate equivalent (LCE) from overseas, which was used to produce lithium salts. The average import price stood at $521/mt on a cif basis.

Fuzhou Superchain ranked the second-largest Chinese importer of spodumene concentrate last month, who took 3,800 mt of LCE in March. Import prices for the company averaged $440/mt on a cif basis.

Excluding the import prices from Tianqi, Ganfeng and Yabao, which were agreed in long-term contracts, the prices of spodumene concentrate imports used to produce lithium salts averaged $439.8/mt in March. 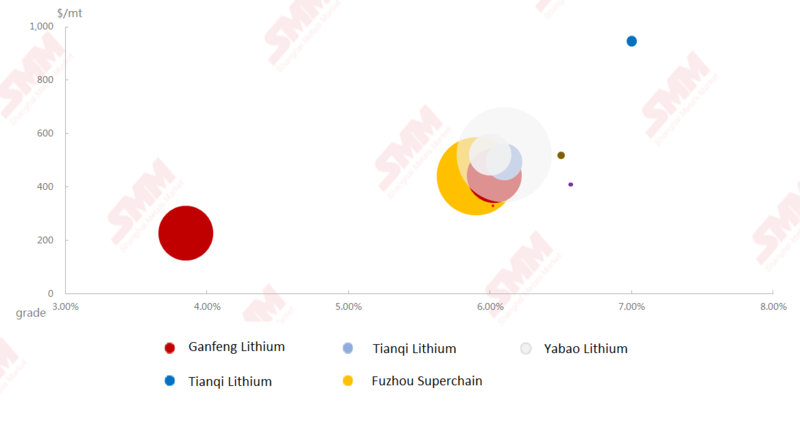 SMM expects the import prices of spodumene concentrate to fall further and approach $420/mt cif in the months ahead as domestic demand may decline with smelters shifting ore stockpiles into lithium salt finished products inventory.

On the backdrop of weak power battery demand at home and abroad, end-users focused on destocking battery raw materials. This dented orders for battery-grade lithium carbonate and sustained the decline in its prices.

Mining companies in Australia may further slow down operations in the second quarter. This, together with the cost pressure on the mining and smelting front, will cap the downsides of prices in the industry.

Demand May Drive Upward Movement of Spodumene Prices in the Future
According to SMM research, Mt Cattlin has announced its prices of long-term orders of 2022Q2 lithium concentrate at $5,000/mt.

SMM survey of China’s Lithium Industry—Jiangxi
SMM lithium team visited lithium salts plants in Jiangxi from March 2 to investigate their new projects and projects under construction. As an important area for lithium smelting, Jiangxi currently has 7 smelters with a capacity of more than 10,000 mt, 4 of which use lepidolite concentrate as a main raw material.

China spodumene concentrate imports in January declined in volume with lower prices
Production, sales and pricing of lithium ore may continue to face headwinds in 2020, on the back of intensified global competition on the supply front and existing inventory pressure at mines...

China ferronickel, NPI imports rose 63% YoY in November
In Jan-Nov, materials from the top supplier Indonesia soared 125% year on year on the back of rising new smelting capacity in the country