CST
translation
Source:SMM
On the evening of April 26, Zijin Mining announced that Bogla Gold Mine, one of the company's main sources of gold, had been refused by the local government to renew its mining rights.

SMM4 27: 2020 capital market "black swan" flying, thunder constantly, with the continuous development of the epidemic situation in China, driving the development of the world economy, the foreign epidemic has been worsening, the international gold price has also risen, just when the gold price repeatedly hit new highs, Zijin Mining, a world-class mining group dominated by gold and basic metal mineral resources exploration and development, has exploded.

On the evening of April 26, Zijin Mining announced that Bogla Gold Mine, one of the company's main sources of gold, had been refused by the local government to renew its mining rights.

As soon as the news came out, the A-share Zijin Mining fell sharply at the beginning of trading on Monday, falling by the limit at one point in early trading.

In Zijin Mining announcement, the company in Papua New Guinea (hereinafter referred to as "PNG") Pogra gold project, did not obtain the PNG government special mining rights extension application. For this mine in 2019, the Bogla gold mine contributed 8.83 tons of mineral gold to the Zijin mining industry.

Bogla Gold Mine is a world-class shallow hydrothermal gold mine. When Zijin Mining was acquired in 2015, it ranked 36th in the world in terms of gold production, and 65th out of 580 gold deposits in the world.

Benefiting from the continued rise in gold prices in 2019, the company's gross profit margin on mineral gold reached 41.82%, up nearly 10 percentage points from 2018 and the highest level in nearly five years. In addition, the international gold price continues to rise in 2020. At the high point of the gold price, the loss of mining rights in Bogra Gold Mine has a great impact on the profits of the company. 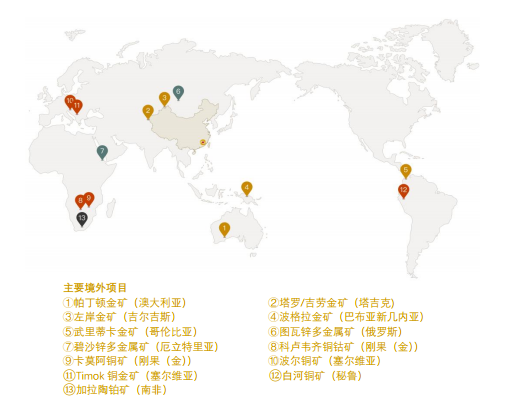 Zijin Mining believes that the Bogla Gold Mine is an important economic source for the PNG government and Nga Province, and has an important impact on the employment of the national and provincial governments, landlords and communities, and that it is in line with the interests of all parties to realize the stable and sustainable operation of the mine. While taking into account the interests of all parties, the Company will actively seek legal and reasonable solutions. If the parties fail to reach a new agreement, the long shutdown of the mine will cause losses to all related parties. Fortunately, Zijin has recovered the full cost of its investment.

As soon as the matter came out, it disrupted the plan of the purple gold mine. In addition, Barrick (BNL), a joint venture of world gold giant Barrick in Papua New Guinea, also holds a 95 per cent stake in the Pogra gold mine project in Pogala, Paxinga province.

On 24 April, PNG Prime Minister Malape issued a statement saying that the Government had decided to reject, in accordance with the law, the application of Pogra Gold Mine operator BNL for a 20-year extension of the mining licence. The PNG government said it would form a national negotiating team to consult on follow-up matters.

Zijin Mining to commission China’s largest copper mine by end-2021
Zijin Mining will “unswervingly” push for the commissioning of Qulong copper mine, the largest in China, at the end of 2021, said Chen Jinghe, Chairman of the Chinese mining behemoth.

Zijin Mining adds feed to its copper smelter in Heilongjiang
The project is designed to produce a maximum of 150,000 mt of copper cathode and 600,000 mt of sulphuric acid a year

Zijin Mining: Copper Prices to Bottom in 2 Years
Zijin Mining Group sees copper prices bottom out in the following 2 years due to oversupply and stronger US dollar, wenhua.com reported.