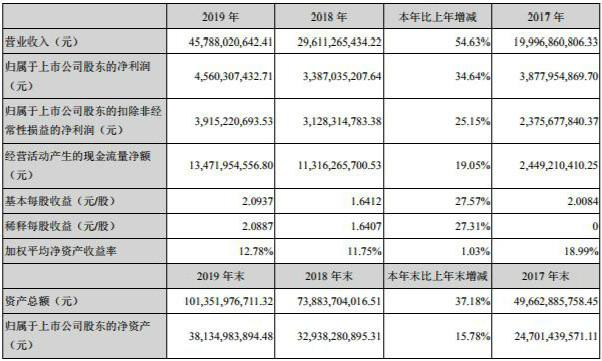 Affected by the decline of new energy subsidies, China's new energy vehicle sales showed negative growth for the first time in nearly a decade last year, but it was not significantly affected in the Ningde era. The company's main business power battery system sales revenue reached 38.58 billion, an increase of 57.38% over the same period last year, even higher than 2018. It is understood that the Ningde era power battery system uses ternary lithium ion battery, lithium iron phosphate battery and other routes, mainly used in downstream passenger vehicles, commercial vehicles and other travel tools, can meet the start and stop, fast charge, long life, long range and other functional requirements, the product has the characteristics of high energy density, long cycle life, safety and reliability. The energy density of the mass-produced cell has exceeded 240 WH / g, the rate performance can meet the maximum 2C charge and 4C discharge, and the cycle life of the product can exceed 6000 times.

At the same time, it shows that the Ningde era in the case of market contraction against the market to expand market share. Last year, Ningde era achieved sales of 40.25 GWh, up 90.04% from the previous year. According to the effective catalogue of new energy models released by the Ministry of Industry and Information Technology in 2019, there are more than 1900 models supporting power batteries in Ningde era, accounting for about 41.5%, making it the largest manufacturer of power batteries.

In addition to power batteries, Ningde also had energy storage systems and lithium battery materials, which generated 610 million yuan and 4.305 billion yuan in revenue last year, up 221.95 per cent and 11.51 per cent, respectively, from a year earlier.

Ningde Times Annual report mentioned that at present, there is a certain degree of macroeconomic uncertainty at home and abroad, and the epidemic of new crown pneumonia has also had a greater impact on the global economy and the production and sales of new energy vehicles since the beginning of this year. The company's first-quarter results forecast earlier that the company expects to belong to the net profit range of listed companies is 733 million yuan to 838 million yuan, down 20% to 30% from the same period last year.