SMM4 24: three major index opening ups and downs, after the opening shock weakens all turn green. On the disk, the agricultural plate weakened, the RCS plate dived. Near the morning close, the index overall weak shock, on the disk, high-standard stocks collectively weakened, hot plate acceleration rotation, on the whole, the market atmosphere is general, individual stocks fall more or less, the fried board rate is in the recent high level. In the afternoon, the two cities continued to decline in the afternoon, the three major indexes collectively fell more than 1%, the index fell below 2000 points. On the disk, only the military industry and beer are slightly active, the concepts of other themes fall back, the market atmosphere continues to cool down, and the money-making effect decreases. 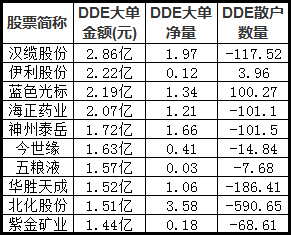 Huang Hong, vice chairman of the Banking and Insurance Regulatory Commission: loans for GSP small and micro enterprises increased by 25.93% at the end of the first quarter compared with the same period last year, and the interest rate on new GSP loans issued by five large banks was 4.3%, a further drop of 0.3 percentage points on the basis of 2019.

[new regulations on subsidies for new energy vehicles are issued: specify the price threshold of 300000 yuan and set the maximum number of annual subsidies for the first time]

On April 23, the Ministry of Finance, the Ministry of Industry and Information Technology, the Ministry of Science and Technology, and the Development and Reform Commission jointly issued the Circular on improving the Financial subsidy Policy for the Promotion and Application of New Energy vehicles, reasonably extending the subsidy policy originally scheduled to expire at the end of 2020 to the end of 2022, and greatly easing the intensity and pace of subsidy retreating. Compared with the previous technical standards have been greatly improved every year, this year will maintain the power battery system energy density and other technical indicators will not be adjusted. However, while extending the subsidy period, the new rules also set the stage for a future phase-out: for the first time, a ceiling of 2 million annual subsidies has been set.

According to Tesla's official website, the prices of the upgraded version and the long-lasting version of the made-in-China Model3 standard have increased by 4500 yuan and 5000 yuan respectively. At present, the subsidized price of the Model3 standard renewal version is 303550 yuan, and the long-term version is 344050 yuan, while the price of the high-performance version, which will only be delivered in January next year, will remain unchanged at 419800 yuan.

[Ministry of Industry and Information Technology and other three ministries: establishment of vehicle Intelligent Management Standard system in stages]

The Ministry of Industry and Information Technology, the Ministry of Public Security and the National Standardization Management Committee issued the guidelines for the Construction of the National Automobile Network Industry Standard system (vehicle Intelligent Management). The document points out that by the end of 2022, the basic technical research will be completed and more than 20 key standards in the fields of intelligent network automobile registration management, identity authentication and security will be revised, which will provide support for the road testing of intelligent network vehicles and the demonstration of city-level verification of vehicle networking under the environment of vehicle networking. By 2025, the system will form a standard system that can support vehicle intelligent management in the vehicle network environment, and revise more than 60 key standards in the business areas such as road traffic operation management, vehicle-road collaborative control and service. (Ministry of Industry and Information Technology website)

Tianfeng Securities said that the market stage rebound, the overall region is still the bottom of the interval shock, trend opportunities still need to wait. In addition to thematic investment opportunities such as agriculture and online celebrity e-commerce, domestic investment opportunities such as consumption, medicine and building materials are still the focus of the market. At the same time, the early adjustment of new infrastructure, new energy, electronics and other science and technology stocks, especially the leading stocks with high performance and price performance, also need to be actively concerned.

Haitong Securities pointed out that yesterday, although the stock index trading volume enlarged, but closed the negative line, lost the 5-day line, the 60-day line pressure is still very large, and did not use the 22 Yang Baoyin strong trend to further break through the resistance level. It shows that the market is very cautious, the strength of high selling has not been weakened, there is about to be a directional choice, and the probability of downward breakthrough is on the high side. Many stocks showed a trend of yin and yang yesterday, getting closer and closer to the low of 2646 points. The possibility of a sharp fall in the short term is not ruled out, which is the exact opposite of the recent trend of the index. On the position, it is suggested that investors gradually reduce the position and wait patiently for the low point of the market to appear.

Citic Construction Investment Analysis in the first quarter of the active fund heavy position shareholding pointed out that the active fund heavy position market value proportion generally declined, the gem position rose for three consecutive quarters, and the main board position has dropped to the historical 28.5% quartile level. The allocation of active funds to Hong Kong stocks has continued to rise since the 2019 mid-report, with 2020Q1 Hong Kong stocks rising to 4.83 per cent. Citic growth style positions increased significantly month-on-month, financial style positions decreased significantly. The holding style continues to grow on the small side. Dividing the style from the industry level, the market value of pharmaceutical and technology shareholding has increased significantly, while the position of financial, real estate and consumer (excluding medicine) sector has declined significantly. At the secondary industry level, the market value of funds in sub-industries such as computer applications, medical devices, chemical pharmaceuticals and biological products has increased significantly, while sub-industries such as banking, white goods, insurance, beverage manufacturing and electronic manufacturing have been reduced by active funds. Moderate equity holdings continued to fall, adding pharmaceuticals, reducing positions in household appliances and banks.

Everbright Securities believes that the current stage of the A-share market valuation is slightly lower, long-term value investors can gradually buy, short-term investors do not need to worry too much. In terms of configuration, it is suggested that attention should be paid to: first, the pure domestic demand plate as a countercyclical regulation policy, including new and old infrastructure construction (construction, building materials, machinery, 5G) and automobiles; second, if there is "shock" in the second quarter of the European and American economies, from the perspective of supply chain, we should pay attention to the possibility of filling vacancies in the fields of automobile and other transportation equipment, chemical and chemical industry, medical and medical equipment, aerospace and agricultural products. Third, under the influence of the overseas economic recession, the extent of the rebound in economic growth is still variable. Before the emergence of "strong data", the fundamentals of essential consumer goods such as medicine and food and beverages were more deterministic. Fourth, at present, there is a large difference between dividend yield and risk-free interest rate in high dividend plate, so it is suggested that investors with low risk preference should pay attention to high dividend target.

Guodu Securities believes that the recent internal fundamentals test the window period, the expected decline in all the data to the ground, the first quarter of domestic macro data, listed companies' performance forecast and other trough data fully revealed; At the same time, the pressure peak of the external test window period has passed, the daily increase of the epidemic situation in Europe and the United States has basically peaked, and now it has entered the stage of platform concussion and slow decline, and some countries have announced guidelines for isolation and unsealing and resumption of production, indicating that the peak pressure of external demand shrinkage is about to pass. The above two major test window boots zi landing, pressure into the end of the release, the marginal improvement of the internal and external environment, have provided conditions for the phased rebound of A shares.