CST
Data Analysis
Source:SMM
Data published by China’s National Energy Administration on Thursday showed that 59.6 billion yuan was invested in power generation projects in China in the first three months of 2020, up 30.9% from the same period last year.

Data published by China’s National Energy Administration on Thursday showed that 59.6 billion yuan was invested in power generation projects in China in the first three months of 2020, up 30.9% from the same period last year.

That was a reversal of a decline of 10.9% in the January-to-February period, as investment in hydropower and w/ind power projects surged. China’s investment in power generation projects for the full year of 2019 grew 15.4% to 313.9 billion yuan from 2018.

Orders for copper busbar from the power generation sector such as electric cabinet manufacturers have increased significantly since March, and a number of Chinese copper busbar producers saw orders booked through the end of May, SMM research found.

China’s investment in power grid power projects in the quarter ended March shrank 27.4% year on year to 36.5 billion yuan, much slower than a 43.5% decrease recorded in January-to-February, according to data from the energy administration.

Copper rod producers typically offer same-day delivery, but some of them now cannot make delivery until four days after they receive the order.

SMM data showed that operating rates at Chinese copper rod producers jumped more than 33 percentage points to 59.4% in March from February. The rate is estimated to further climb to 64.44% in April.

Combined investment in power generation and grid projects in China stood at 96.1 billion yuan in January-to-March, up 5.8% from the same period last year, according to SMM calculations based on data from the energy administration. 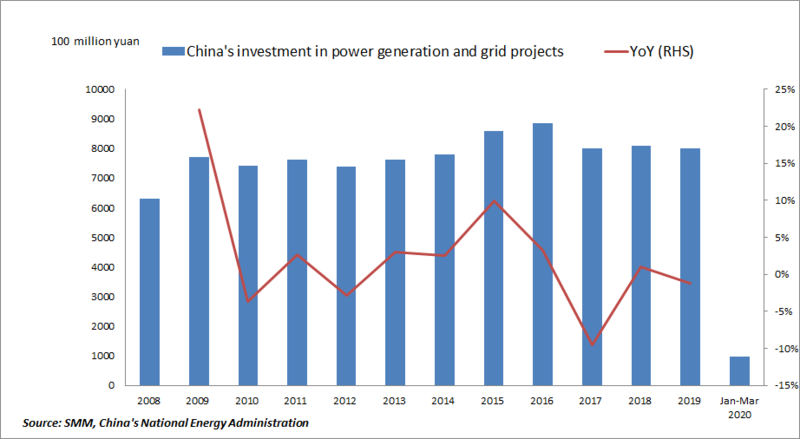 NDRC: To further release copper, aluminium, and zinc reserves, strictly penalise price bidding
NDRC will continue to follow the deployment of the executive meeting of the State Council, work with relevant departments to strengthen the monitoring and forecast of commodity prices, organise subsequent release of copper, aluminium, zinc and other national reserves, and pay close attention to abnormal market price fluctuations.